I had my first baby last June, and I probably bought one or two small purchases new. The rest was all second hand. I’ll also let you in on a secret, but please, don’t tell anyone I know. I returned about 90% of my baby gifts and bought stuff for our new home instead. I know; it is a bit shameful. However, I did tell everyone I know that we didn’t need anything for the baby, and that resulted in getting about six sets of baby washcloths and several newborn clothing sets.

Now that my baby is almost a year old, I can say that I am very happy that I bought my baby stuff used. Here’s why:

I Made a Profit on My Used Goods:

Get this, not only did I save a ton of money from buying used baby items, but I also made a profit on majority of it. I bought all of my daughter’s clothing from newborn to six months and majority of my equipment from a wealthier mom of two daughters. She was also very sweet and threw in a ton of free items because I was buying so much from her. For all of the clothes, I paid $110. There was about 200 pieces, if not more. So far, I have sold 80% of the clothing and have made much more than $110.

Many other items I have sold for what I bought them for. Basically, I was able to use the baby items for free.

I Don’t Feel Bad About Stains: 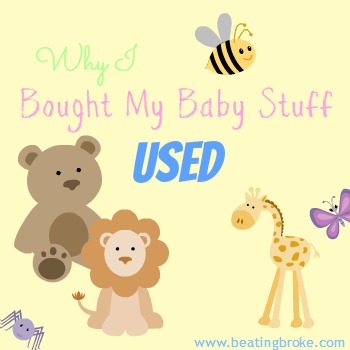 s I said above, I bought a lot of clothes from the wealthy mom. There were some very nice outfits in them, and I received a lot of compliments on how I dressed my daughter. However, I am not very good at laundering or keeping messes contained. A lot of pieces were stained once my baby girl started eating solid foods. Not only that, but my dogs chewed up several pieces of her clothing too. Now, if I had spent more even $5 a piece for each outfit (which is fairly cheap in baby world), I would have been devastated at how many pieces were ruined. However, since most of the clothing was free (after adding in the money I made back), it was easier to just let it go. I instead used the pieces as baby wipes to further save money.

I Don’t Have to Store Anything:

I don’t know how many more babies are in my future, but I do know one thing. I don’t want to store several baby items to use for the next baby. If I had bought everything at full price, I would have the guilt to save everything so that I wouldn’t lose my money. However, since I bought everything at 60-90% of the original price, I am able to sell the item for most of the cost. I also know that when the next baby comes around, I will be able to find the same used baby equipment for the same prices.

Don’t forget that every square inch of your home that is devoted to storing stuff is costing you money in some way or another. Plus, who doesn’t love having a cleaner, clutter-free home?

I Don’t Have Buyer’s Guilt:

Buyer’s guilt can happen to a lot of new parents. You buy that awesome looking Bumbo seat for your baby only to find out that they don’t like it or that it only keeps your baby happy for one month. For example, I bought a Prince Lionheart bebePOD Flex Baby Seat used for $8. On Amazon.com, it is $34. My baby used it for two months. So basically, my weekly cost to use this seat was $1 (though, this does not include the fact that I will sell the seat for profit or cost). If I had bought it at full price and used it for two months, it would be like paying $4.25 a week. I would rather treat myself to a Starbucks latte once a week with the money saved.

One more example; I was set on breastfeeding and pumping for the baby. However, for many reasons, it didn’t work out for us. I would have felt even worse knowing I spent $260 on the breast pump. Instead, I paid $120 and sold it for $70. My cost was $50 for six weeks of pumping, or $8.33 a week. Considering it costs about $15 a week to rent a pump, I think I made out on top.

I am very passionate about buying used items, especially for my baby. Baby items are so pricey, so I loved having top of the line items that were still in our budget. Also, let me just quickly mention how much better used items are for baby’s health and the environment. Used items don’t give off that new chemical smell and used clothes have already been worn and washed a few times and contain less harmful chemicals and toxins too. Think twice the next time you shop for your baby.

Ashley Eneriz is a freelance writer and thrift store/yard sale queen. She blogs about saving money and making money at home through her site The Thrifty Wife.