Besides your home, one of the biggest expenses you will face is purchasing a car.  Unlike a home, cars do not appreciate.  They are a depreciating asset that lasts for a finite period.  Choosing the correct type of car within the price range you can afford can have long lasting consequences on your finances over the years.

John (name changed) is a 21 year old college student.  He was in the market for a new-to-him car, but he knew he didn’t want a car loan.

He found the perfect deal on Craigslist.  The car was listed for $9,000, but John knew that it had a Kelley Blue Book value of $12,000.  John met the owner, went for a test drive, and paid $9,000 in cash.  John was proud of his deal—until he went to transfer the title and learned the great deal he had just bought was a stolen vehicle.

Everyone knows that dealer prices for used cars are usually at Blue Book value or higher, but the up side is that if you buy from a dealer, you don’t have to worry that the vehicle is stolen.

But what should you do if you want to find a good deal and don’t want to rely on a dealership?

The investigator on John’s case recommended taking these precautions:

Be wary of a good deal that is significantly below Blue Book value.  If a seller wants to sell a car for much less than it’s worth, be suspicious.  In this case, you should think of the old adage, if something seems too good to be true, it probably is.

Don’t trust a seller who only has his cell phone number as his means of contact.  If the seller won’t give you any personal details or ways to contact him besides his cell phone, he may have something to hide.

Run a CARFAX check.  Running a CARFAX is a good idea no matter where you’re buying the vehicle.  A CARFAX will tell you how many owners have had the car, whether it’s been in an accident, how it was maintained, among other information.

Run a VIN check.  Using the free service VINCheck, you can see whether or not the vehicle you’re considering buying has been stolen.  Had John done this, he would have been tipped off immediately that something was not right with the vehicle he wanted to buy.  As it turns out, his vehicle had been shipped down to Mexico where the VIN was altered.  The vehicle was then brought back to the U.S.  When John went to register the title, he discovered that the VIN he had did not exist.

Buying a car from a private party can be worthwhile and save you money if you take the proper steps.  If you don’t, you could find that the bargain you purchased was actually a very expensive lesson.

Have you ever had trouble buying a vehicle from a private party or know someone who had trouble doing so?

I recounted in my last post the many adventures we had driving 1,750 miles from Illinois to Arizona where we damaged not one, but two rental cars.  We saved $100 by not purchasing the rental car company’s auto insurance, but that decision cost us $500 in our deductible.  Not my brightest move ever.

If you think, like I did, that a rental car company’s insurance is a scam that should be avoided like the plague, here are some reasons why you might want to reconsider:

The Rental Car Company Has a Different Standard Than You 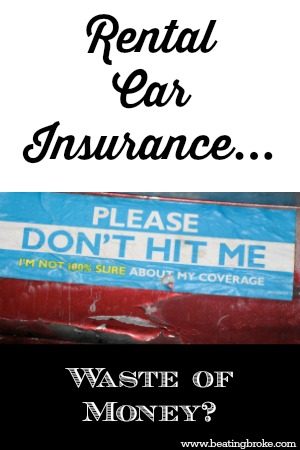 The rental car company we used said any damage smaller than the size of a quarter, they would let slide.  Anything bigger than that, and it needed to be repaired.

Any time you drive a car, you risk bumps and scratches to the car’s exterior.  I have a large scratch on the back of my vehicle that I find annoying, but not worth the price of paying my $500 deductible.  I’m guessing your own vehicle has similar scratches and dents.  They’re minor, and you don’t want to spend the money to repair them.

Your Insurance Premium May Go Up

Another reason people let minor dents and scratches on their own vehicles slide is because they don’t want to face a claim and risk having their insurance go up.

Some people even do this for more major repairs.  Several years ago, a man rear-ended me, and he chose to pay the $1,400 for the repair to me directly so he could avoid submitting the claim to his insurance and risk having his premium go up.

If you don’t purchase the rental car company’s auto insurance, you’ll have to choose to pay out of pocket or to risk having your premium go up.

To decide whether or not purchasing insurance from the rental car company is worthwhile, ask yourself these questions:

1.  Have you made any claims on your insurance in the last three to five years?  If so, you will probably want to purchase the rental insurance; in the long run, that will be cheaper than facing a spike in your insurance.

2.  How far do you have to drive?  Of course, accidents can happen anywhere, but if you’re renting a car for the weekend and driving it around your hometown, you may be able to avoid rental insurance.  Our problem was that we were driving 3,500 miles round trip in an area we were unfamiliar with.  Things like dead deer and street sweepers on the highway pose risks that you can’t foresee before the trip

3.  How high is your deductible?  If your deductible is anywhere from $500 to $1,000, purchasing rental insurance may be smarter, especially if it is going to be less than $100.

What is your opinion?  Purchase car rental auto insurance or just rely on your own car insurance? 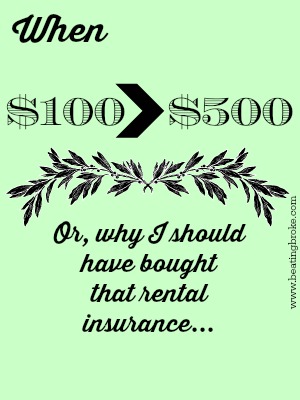