We were recently told that our defined benefits plan was being taken away.  For those that are confused, a defined benefits plan is what is normally called a pension.  For me, I haven’t been around long enough for it to really affect me.  Some, who have been around for a very long time and are nearing retirement, it will mean a rather significant chunk of the money that they thought they would have for retirement will be gone.  To their credit, our employer is doing it the right way.

Rather than just declaring the fund bankrupt, or letting it run until it was bankrupt, they’ve decided to shut it down gracefully.  What that means is that those of us who are vested in the plan will receive a payout of the amount we have vested.  And, as part of that, we need to decide what to do with that money.  We have four options:

I’ve ruled out option 1 as it doesn’t make any sense to do with the interest rates where they are.  Most likely, I’ll be using option 2.  But, I just can’t come to a concrete solution.  If I take option 2, I add a significant amount of money to my 401(k).  More is always better.  But, I have no more control of that money than I do with the current money that’s in there.

If I take option 3, I still retain the same amount of money in a retirement account, plus I have far more control of where the money is invested than I do in the 401(k).  That’s also the con of this option though.  I’m no investment expert.  I could look to invest in a stocks and shares ISA but as a general rule, most of the investments I’ve made aren’t all that great.  Which means it would have to be limited to EFTs and Mutuals which doesn’t afford that much more control than in the 401(k).  The final option would be to take the money in a check.  The big downside there is that the IRS takes 10% off the top as a penalty.  Then, it’s counted as income which gets taxed as income.  In our tax bracket, that could mean an extra 15% in tax liability.  If it bumps us up into a new bracket, it could mean some of it could be 25% in tax liability.  So, I’d pay an instant (or nearly so) 25-35% if I took a check.  But, that still means I would receive a lump sum of several thousand dollars.  That money could be used to pay off at least one credit card, if not two, and alleviate some of the monthly burden that our debt gives us.

I know that the safest (rightest) answer is to put it into one of the retirement accounts, but having the cash to dump some of our debt would also be very advantageous.

What would you do?  If you were in my situation, would you play it safe and roll the money into your 401(k)?  Would you take the cash and pay something off to reduce your monthly expenses?  Tell me how you would handle this!

But, that’s only at it’s most basic level.  Today, the world of stock investing is so much more.  There are options, short selling, margin trading, ETFs, mutual funds, hedge funds, and a myriad other ways that you can partake in this sometimes exciting, and always risky world.  It isn’t just simply owning a portion of a company anymore.  You can sell shares of companies that you never owned in the first place.  You can buy on margin with money you never had.  And you can do it all whenever you want.

The way the stock market works has evolved so much in order to optimize the buying and selling of shares of companies merely for the profit of the brokers and day-traders.  Very few investors will buy a share with the intention of holding it for more than 5 or 10 years.  That’s a drop in the bucket for companies that have been around for over 100 years.

Events like the crash of May 2010 and the crash in 2008/2009 due to the real estate bubble bursting give us all pause when we think about investing.  For those of us who don’t want to try and “beat” the market and who proscribe to a more long term approach to investing, the drastic ups and downs of the market are cause for concern.  What happens if the crash can’t be stopped?

Perhaps, but I don’t think that the many brokers and traders who make their money with the newer methods of investing will allow it to happen.  To truly fix the market, it needs to revert to it’s much more simple state.  Simple buying and selling of shares.  No options, no shorting, no margin.  Just ownership of a company.  After all, that’s what it’s really about.  And if it can’t be fixed (or won’t be allowed to be fixed), perhaps it’s time the investors who don’t like the way it’s working move our money someplace else.  There are plenty of opportunities in your local communities to invest in start up companies and other investment vehicles.

A word of warning though.  Those local opportunities are generally much more risky than buying a share or two of a company like Proctor and Gamble who have been around for decades.  Only about 10% of start-ups still exist 5 years later.

Risky as it is, the stock market can still be a sound place to keep your money.  Yes, you do run the risk of losing your investment.  Nothing there is insured or guaranteed like you would see if you had your money in a savings account at a NCUA insured Credit Union or a FDIC insured Bank.

Has stock trading ruined the world?  Not yet.  Will it?  Let’s hope not. 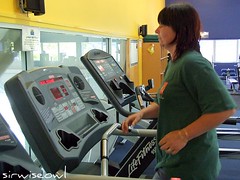 When you’ve got bills and debt to pay off, you are constantly feeling like you’re running a personal finance marathon.  Each month is a sprint to the finish to see how much debt you can pay off.  We do it to get to that finish line.  To send that last check (or bill pay payment) and then run into the streets screaming.  Some of us may even follow that up with a call to a certain Mr. Ramsey.  With any luck, most of us will reach that point sooner rather than later.

But, then what?  We’re done paying off debt.  We don’t need this silly budget thing anymore right?  And we certainly don’t need to be worried about how much we’re spending.  And so what if we leave a balance on our credit cards now and again.  Wrong.  Oh so wrong.  If your years of debt repayment hasn’t conditioned you to it already, you’ll soon find out that you still have to do all of that.  You might be able to loosen the strings a little, but keeping those habits is what will keep you from ever going back there again.

With all of your debt paid off and only your monthly expenses to worry about, you’ve got to get on “the Debt Free Treadmill”. You’ve got to use it to keep your self in financial shape. However, in this case, it is so you never have to run that marathon again. Debt is an easy trap to fall into. It only takes one lazy month to leave a little balance on a credit card and start the cycle all over.

Get on “the Debt Free Treadmill”!  Keep yourself in financial shape by continuing the same habits of saving, budgeting, investing, and frugality that you used to finish that marathon.  Use it to your advantage.  Unlike a large majority of the people in this world, you aren’t running that marathon.  Best of all, you get to use that financial fitness to benefit others.  Share your knowledge, and help people reach the marathon finish line so that they can jump on “the Debt Free Treadmill”!