There is nothing more exciting than the anticipation of a new baby.  However, a baby can increase the budget even if you’re frugal.  These are just 6 unexpected baby expenses to budget for.  These items can’t bought second hand and likely won’t be gifted at a shower. 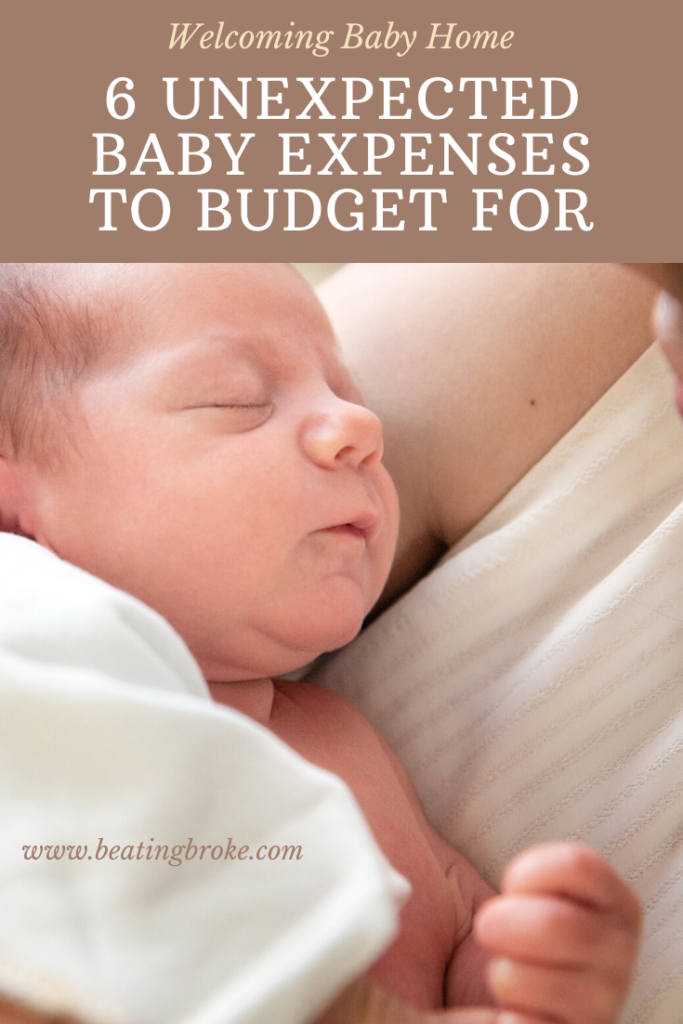 6 Unexpected Baby Expenses to Budget For

If you’re planning for a new arrival this year, there are a number of expenses you should plan for:

I breastfed all three of my kids, but all three were such massive babies with big appetites that I had to supplement with formula while breastfeeding.  We hadn’t planned on that expense, and formula is expensive!

If you are going to breastfeed, you’ll need a breast pump because even if you’re a stay at home mom, there will be times that the baby doesn’t want to eat or you won’t be with the baby at feeding time, and you’ll want the option to pump.  If you don’t plan to breastfeed for long, you can rent a pump month by month through your local hospital.  I bought mine for $200 and used it for all three children, so it was well worth the expense.

While most babies are perfectly healthy, some babies have issues and have to visit the ER.  My friend’s baby got RSV and then had a partially-collapsed lung, all at 5 weeks old, so she spent five days in the hospital.  That was an expense they had not planned for, and it took them a few months to pay it off.

My daughter had jaundice for three months, and we had to see a number of specialists, and she was checked into the hospital one night.  (She was fine, but we hadn’t planned on the specialists and going to the hospital several times a week to check her bilirubin.)

If mom is breastfeeding, she’s going to eat a lot!  It takes a lot of energy to produce all of the nutritional needs for baby.  Don’t be surprised to see your grocery bill increase for the duration of the time that mom breastfeeds.

Mom’s body changes after delivery and the post-partum period.  Not only will she need clothes that fit her when maternity clothes are too big and she can’t yet fit into her pre-pregnancy clothes, but she’ll also need some good nursing clothing if she’s breastfeeding.

There are other, little items that you may need such as diaper rash cream and gas drops.  Our second child had so much gas that she wouldn’t sleep at night, and we went through baby gas drops what felt like every week.  We later found out she had a milk intolerance, and when we took her off milk, she did fine.

If you’re expecting a baby, you can get many of the items that you need at your baby shower.  However, there are other items that you’ll need that you won’t get as gifts and can’t get secondhand.  Being aware of these before the baby comes can help you create a realistic budget.

What other expenses would you add to this list?

College is getting more expensive every year, and with the student loan crisis, more and more students and parents are trying to forego student loans.  Avoiding student loans, if possible, is a smart way to go.  We should know; my husband and I are still paying off his student loans from graduate school, which he finished eight years ago.  So, we want to do everything we can to help our own children go to college without accruing any debt.  How we’re helping our teen save for college involves a multi-pronged approach. 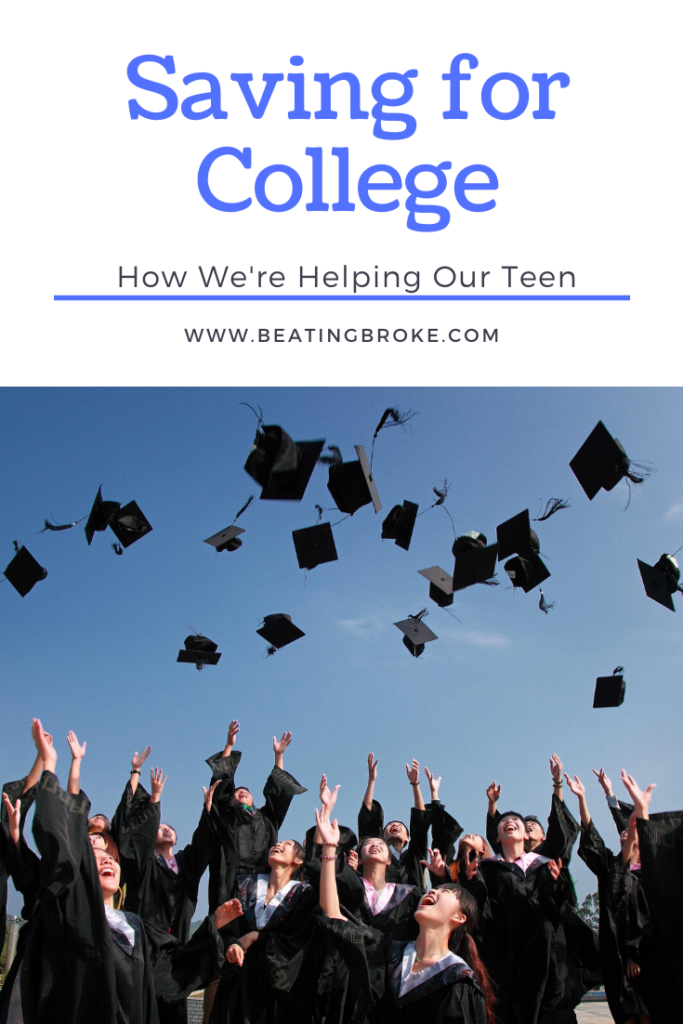 How We’re Helping Our Teen Save for College

There are four ways we’re helping our teen save for college:

My husband is employed at our local university, so our children will get 75% off the price of tuition.  While this school currently costs approximately $12,000 for in-state tuition for a year, our children, thanks to the discount, will only need to pay $3,000 a year.

From the time our children were young, we set up a savings account for college.  We match each dollar that our child saves in this account.  Our three children all have varying balances, and one of our children is a much more prolific saver than the other two.  While this account won’t cover their $3,000 a year that they will have to pay for college, it will likely cover their textbooks for several semesters.

Our teen is bright and this year decided to challenge himself with an AP history course.  We paid for the AP test that he will take in May.  If he scores a 4 or a 5 on this test, he will be able to earn college credit for the course.

Next year, he plans to take several AP classes and tests, and we’ll pay for those, too, in the hopes that he can score high enough and reduce the amount of time he needs to be in college.

Our teen took a practice PSAT at school, and while his score was okay, it wasn’t stellar.  Since he has a 4.0 in school, if he can raise his SAT score by at least 100, he will qualify for a $6,000 scholarship from our university.  (The higher the scores, the higher the scholarship amount he qualifies for.  If he could get his score even more than 100 points higher, he would qualify for an even larger scholarship.)

We don’t have money to pay for SAT tutoring, but having it would be valuable, especially if it helps our child raise his score and qualify for the scholarship.  I found a scholarship offered through a private foundation that could be used for SAT prep.  We applied, received the scholarship, and he’s begun tutoring this semester.

Money has been tight throughout our marriage, so we’ve never had much money to set aside for our children’s college education.  (Our priority has been paying off our student loans and saving for retirement.)

However, helping a child in other ways rather than just paying tuition outright can also be valuable.  This is how we’re helping our teen save for college.

My husband and I have three kids.  The first two are 4.4 years apart, and the second two are 17 months apart.  Our younger two get along great and are playmates most of the time, save for the occasional fight.  Our oldest is so far apart in age from them that he doesn’t really have much to do with either of the younger ones.

If you’re just starting your family or planning to do so, you may wonder what the perfect age separation is between your children.  That can vary wildly depending on your family, your kids, and their interests.  However, if you’re looking at the best spacing of children for your finances, I’d recommend having children 4 to 5 years apart. 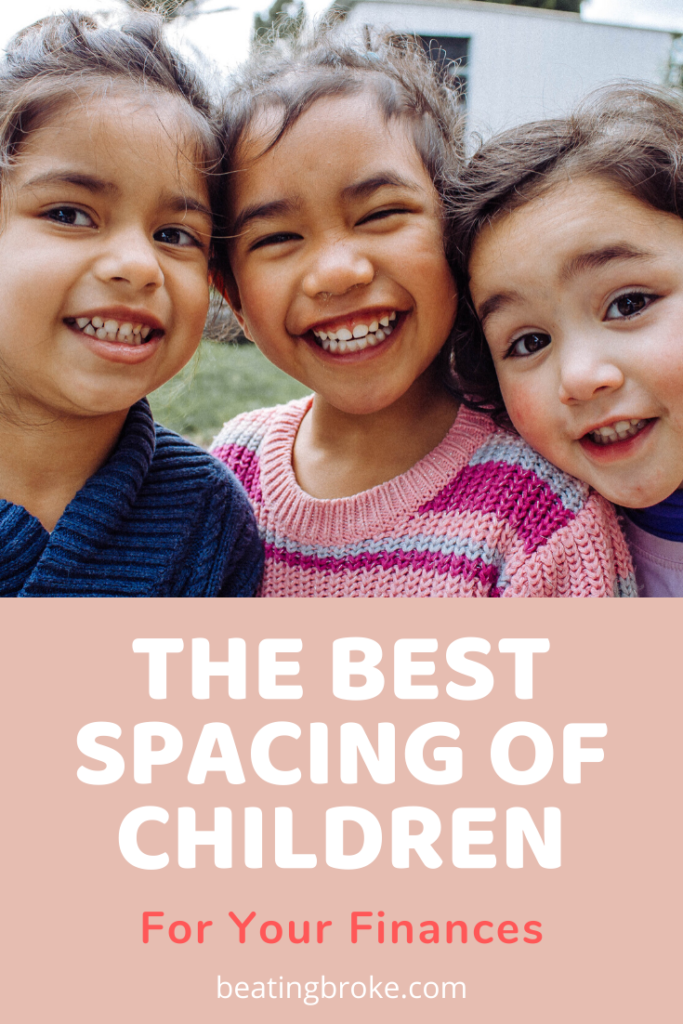 Why?  There are several reasons:

I think our oldest is on a permanent growth spurt, and his appetite is no joke.  It was nice, for a few years when his rapid growth and appetite were larger than my husband’s, to still have two smaller children who had much smaller appetites.  I can’t imagine having three ravenous teenage children at once who are eating me out of house and home.

Our oldest attended day care and preschool while I continued to work.  He had almost finished preschool and was nearly ready to go to a public kindergarten (read free!) when we had our second child.  I did get ample maternity leave with my second, so we didn’t have to worry about paying for two kids in day care.

However, I was only back to work a short while before I became pregnant with #3.  When I thought about returning to work and looked at the daycare costs for two children under two, I realized I would be working simply to pay for daycare.  I quit my job and have been working as a freelance writer from home ever since.

This is probably the biggest reason to space your children four or five years apart.  You can get one child through college before the next one starts.  Sure, if you have more than one child in college you’ll likely qualify for more financial aid, but it will still cost you more than if you were paying for only one child in college.

Okay, this one doesn’t have much to do with finances, but when you space your children further apart, you become an empty nester much more slowly.  When my oldest leaves home, I’ll likely still have several years at home with my younger two.  I can’t imagine having all of my kids move out around the same time if they are closely spaced together.

Of course, there are many considerations, not just financial, when deciding how closely to have your children.  However, the best spacing of children for your finances is four to five years apart.

If you have kids, did you decide on spacing based on finances or other factors?  How far apart did you space your kids and why?