Keeping up with the Joneses is bad.  We know that.  From a financial perspective, we spend a great deal of our time overcoming the green monster called envy in order to keep our lives in some semblance of financial order.  We know the Joneses down the street with their big, fancy new SUV.  We see them going on long family vacations.  And we know the guy that mows their lawn.  But, we also know that there’s a pretty high probability that they still owe a ton of money on that SUV.  That that family vacation likely was financed through a credit card.  Their entire financial life depends on them keeping their well-paying jobs.

I’d like to talk about another family.  The Smiths.  You don’t know them.  We don’t talk about them like we do the Joneses.  Why don’t we?  Because, outwardly, their lives are nothing to be envious of.  They don’t own a big house on a double lot.  They don’t drive a brand new Escalade.  Their family vacations consist of weekend trips to state parks or trips to visit family a couple of counties over.  Outwardly, they may even seem a bit downtrodden.  They may seem (GASP!) a bit poor.

Sometimes they are.  Sometimes, they are truly victims of their circumstance, or their poor financial choices along the way.  But, for every one of those families, there’s at least two that aren’t poor.  They have well paying jobs.  They have money in the bank.  And they occasionally barbeque a steak on the cheap grill they have on their back deck.  It’s those Smiths I’d like to talk about.

It’s the Quiet Ones You Have to Watch Out For

Why don’t we know the Smiths?  Because we live in a society that is enamored of our celebrity.  We hang on every word that that famous athlete, or famous actress says.  We try and model our lives after theirs.  They live a glamorous life, full of flashing photography, red carpets, and any number of endorsement deals. 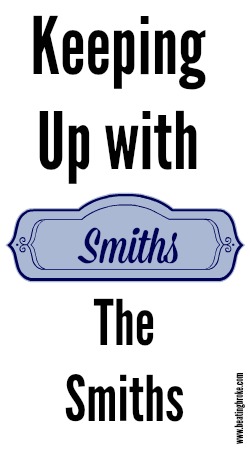 Who wouldn’t want to be like that?  Short of being famous, we decide that we’ll see how close we can get.  The bank doesn’t turn us down for that big house, big car, or vacation to the same beach that the celebrities hang out on.  Maybe we’ll even get to see one of them!

Society may push us towards that Joneses sort of lifestyle.  After all, what would become of some of the companies if we stopped trying to keep up with the Joneses and stopped buying all their luxury goods?  What would the news and tabloids cover if we weren’t constantly buying their rags in order to find out what sort of clothes the princes and princesses of some foreign country were wearing this spring?

All around us, there are Smiths.  We don’t notice them, and we rarely get to know them.  We’re surrounded by the Joneses, and the shiny facades of businesses and economies that are driven by their reckless spending.  But, under those shiny facades is a crumbling foundation.  The economy of the world is on shaky ground.  We saw just how shaky it really was in 2008.  When the housing market crashed, it very nearly brought the entire world economy with it.  Luckily, the economy was strong enough at the time to take a beating.  It wasn’t strong enough to bounce right back.  It’s been a long slog back to where we were.  We aren’t even back there yet.  There are still parts of the world that are hurting economically.

Imagine, for a moment, if we rebuilt that economy, not on the sands of bailouts and extended unemployment benefits, and instead built it on the bedrock of hard work and frugality that got us where we were in the first place.  Imagine if we had seen the folly of our loose spending ways and tightened our belts, stuck to our budgets, and started building an economy that doesn’t shake and quiver at the smallest rise in unemployment, or the slightest miss in an earnings report?

What if, instead of running around willy-nilly chasing the lifestyle of the Joneses, we were calmly working ourselves into the stable economy of the Smiths?  What if we all didn’t have wait for our next paycheck to buy gas because our last paycheck went to our mortgage and car payments?  What if we were able to fill a tank of gas from the cash in our bank account and know that we still had our emergency funds to help us along should a real emergency come along?

We can.  We can bring our spending in line with our earning.  We can sell the fancy car that we don’t need.  We can downsize our house to something that we can afford.  Sure, the dependable used car you buy might not have as much chrome as the fancy one.  It might not have the same heated seats.  And the house you downsize to might not have a walk-in closet, or a jacuzzi bath tub.  I’ll let you in on a little secret.  You don’t need them.  They’re luxuries.  You only think that it’s normal to have those things because the Joneses told you it was.

We should be keeping up with the Smiths.

We can be the Smiths.