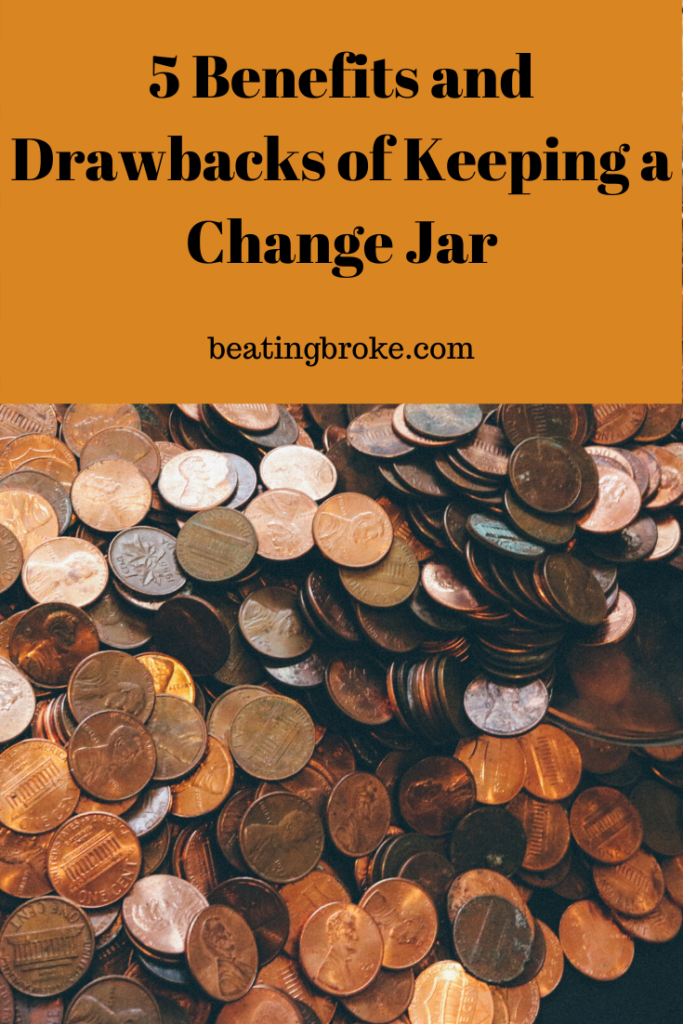 Do you keep a change jar?  My mom keeps all of her change and has been saving it for the last two years for a vacation.  She is not alone as many people hoard their change as a way to save money, especially if  they feel they’d otherwise be unable to.  However, just as many (or more) argue that keeping change is a waste of time and space.  Both sides have valid points; I find there are 5 benefits and drawbacks of keeping a change jar.

Benefits to Keeping a Change Jar

There are benefits to keeping a change jar, which is why so many people do so, even in this age of prevalent credit card usage.

Save for Something Special

Have you ever seen the big five-gallon jugs that people use to collect their change?  One man saved for 10 years, and when he cashed it in, he had over $3,000, which he used for a trip to Europe.  Would he have saved that money without keeping his change?  He says no.  If you don’t have the discipline to save, keeping your change is a good, mindless way to save.

Another woman saves her change for a rainy day.  She and her husband had an expensive car repair that they hadn’t planned for, and they robbed all of their budget categories to pay in cash for the expense.  That left her with no grocery money for her family of four for the month, so she raided her change jar.  She had $224 in there, which she used to feed her family.  It was still a tight month, but she didn’t go into debt, and her family didn’t go hungry.

Drawbacks to Keeping a Change Jar

Unfortunately, there are risks and expenses with saving this way.

One of the major drawbacks to keeping all of your change in a jar for years is that you miss out on the interest you could be receiving.  Take the man who had $3,000 in change.  He could have invested his money as he saved and been earning interest.  He would have made more money than he did just leaving it in his closet.

May Lose It All

An even bigger drawback is that you have the potential to lose all of the change.  A friend of mine had about $120 in change she’d been saving, and, unfortunately, her house was robbed.  All of that money was gone.  Even if your house isn’t broken into, you could lose the money if you have a fire.  Even teens have been known to dig into their parents’ change jar for a little extra money.

You May Pay a Fee

A select few banks still offer coin counting machines for free, but many won’t take coin rolls.  If you have to rely on CoinStar, you’ll pay an 11.9% fee, so if you turn in $300 in change, you’ll pay $36 in processing fees.  If you need to pay a fee this high, is it still worthwhile to save your change?

Saving change has been a fun way to save money, but as these 5 benefits and drawbacks of keeping a change jar demonstrate,  it’s becoming increasingly costly.  If you can have enough self-discipline to save the money on your own in a bank or invest it, that is the better way to save.

Do you save your change? What benefits and drawbacks do you see? 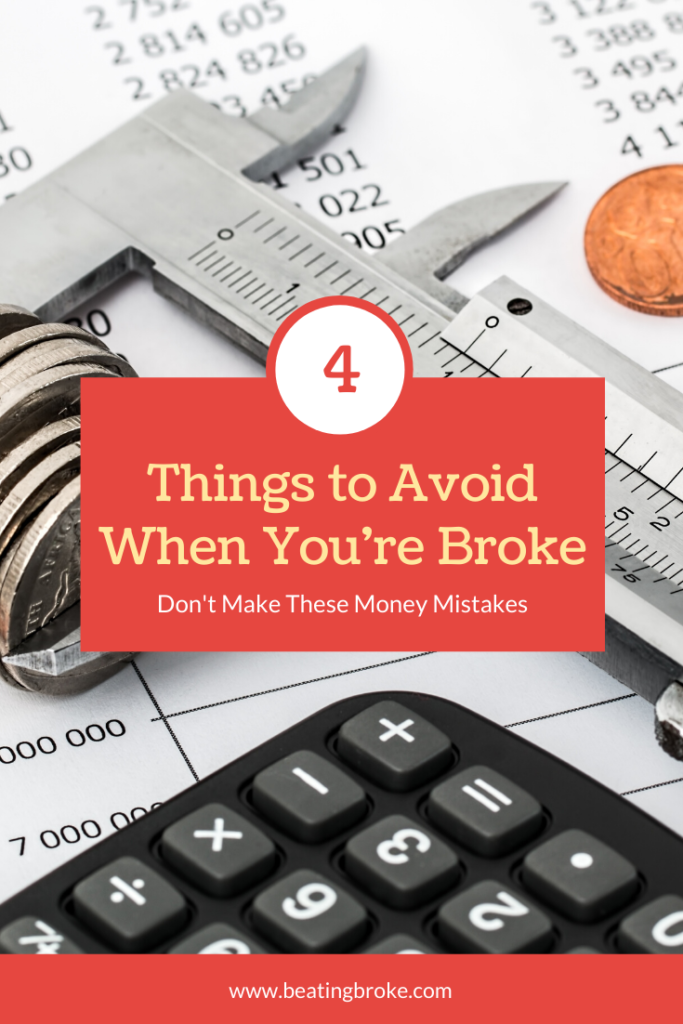 Most of us have been there. You have three dollars in your checking account, and it’s five more days until payday. You may feel overwhelmed and not sure what to do. Unfortunately, many people in this circumstance feel that there is nothing to be done and, out of desperation, ignore their situation – continuing to live life as if their finances aren’t dire. However, all this does is make the situation worse. Instead, consider things to avoid when you’re broke so even if you’re not improving your situation, you’re not making it worse.

Things to Avoid When You’re Broke

When you’re broke, credit cards can feel like a lifeline. For a while, at least until you reach your credit limit, you can continue to maintain your current lifestyle. But, this is a mistake! You’re broke! If you admit that and are frugal with your money, once your current financial hardship ends, you’ll be in a position to improve your finances. However, if you have to pay back thousands of dollars of debt, you’ll still be broke. Please don’t make this mistake.

Entertainment is expensive. Movie tickets cost $10 or more; a meal out costs $10 to $40, depending on where you dine. Netflix costs $13 a month. All of these expenses add up over 30 days. If you’re broke, don’t pay for your entertainment!

Go to the library and check out a movie for free. Attend a local free concert at the university. Invite friends over for board games.

Nobody says you can’t have fun when you’re broke, but find ways to be entertained that don’t cost any money.

Not Having a Budget

Burying your head in the sand is easy when you have no money. If you ignore the situation, it won’t exist, right? Wrong. Ideally, you should be budgeting every month, but this is even more important when you’re broke.

You have limited money, and you have to decide where that money should go. When you have a plan that you can follow, you’re much more likely to not overspend. Having a budget and following it is absolutely necessary when you’re broke so you don’t make your financial situation worse.

Being broke is embarrassing, but being honest with your family and friends is the best way to handle the situation. If you’re not honest and you pretend that everything is fine, your friends may be offended when you repeatedly turn down invitations. If they know your situation, they may be more willing to find things you can do together without putting a financial strain on you.

Things to Remember When You’re Broke

Even though at the moment you may feel hopeless, remember that you’re likely not going to be broke forever. You will get a better job or have fewer expenses in the future (probably the former rather than the latter). Your financial situation will improve, but that improvement can come faster if you make sure to consider these things to avoid when you’re broke. Don’t make your future more difficult by making bad money decisions when money is tight! 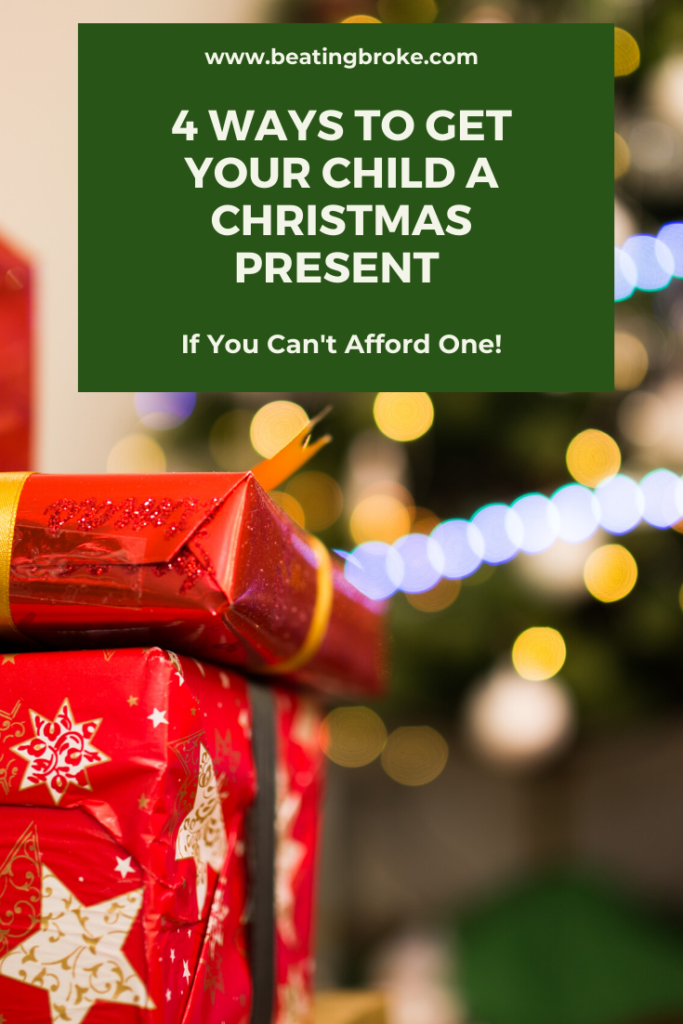 My mom often tells the story of the first Christmas she and my dad had after they were married. They didn’t have any money, so they bought a sad, little Christmas tree on Christmas Eve that only cost a few dollars. It was so tilted that they had to tie it to the wall to make it stand up straight. She got my dad a warm wool pair of socks to wear when hunting, and he got her a tea kettle.

She laughs about that Christmas now. In retrospect, the story does have a poignant sweetness to it. However, that Christmas, they didn’t yet have kids.

When you’re struggling financially, not being able to buy Christmas presents for your kids can be heartbreaking. If your money is stretched and you literally have nothing extra, there are ways to make sure your child has a gift under the tree.

If you have a small bit of money to buy a gift, consider looking at thrift stores or secondhand shops. Or, you could turn in your kids’ outgrown toys and clothes for credit to purchase items at the secondhand store. Be warned, however, that secondhand stores usually pay just a pittance for items they buy, so you might not get much credit.

Exchange Used Toys with Another Family

Another idea that doesn’t cost anything is to exchange toys with family friends. You gather up the toys your children are bored with or have outgrown, and exchange them with another family who does the same. You can wrap these “new” toys and give them to your children for Christmas.

Sign Up for a Free Gift with the Salvation Army

You’ll need to prove that you are indeed low income. You can do this easily if you’re receiving food stamps, WIC, or Medicaid.  There are also other requirements you’ll need to submit, which you can find on the website or when talking to your local office.  Be advised that many people sign up for this service in October, so time is of the essence.

Many churches run their own Christmas present giving operation. Contact local churches and tell them your situation. They may be able to help you or refer you to another church or agency that can.

If your budget is beyond stretched thin as my parents were on their very first Christmas, remember that there are 4 ways to get your child a Christmas gift if you can’t afford to buy one. There are many services available to help assist families in a bad financial situation so that every child can open a present on Christmas.

What other suggestions do you have for families who cannot afford a Christmas gift for their kids this year?