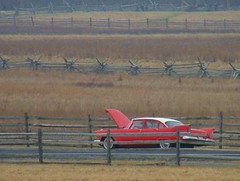 One of the tenet that I am trying to live by financially is to pay cash for as much as possible.  There are certain things that I won’t be able to do that for.  A house is the most likely example there.  Many people would lump a car in with that category as well.  Not here.

Beating Broke Rule: You should strive to pay cash for your cars

A new car depreciates in value more in the first few minutes of ownership than it does in the next year.  The second that you sign the paperwork and the dealer hands you the keys, a new car loses a large percentage of it’s value.  In some cases, this can be 10-15%.  By buying used cars, someone else has already paid for that depreciation and now you can enjoy the lower depreciation of the car through the years.  And if you go with a car that’s only a few years old, it’s almost like a new one anyways.

Why would you want to pay someone several hundred dollars a month to drive their car only to give it back to them in the end with no value back?  And if you think you need to lease so you can have the smaller payment, you should be looking at a cheaper car in the first place.