The Olympics have been on for a week now, and across the world, young children are watching and finding themselves thinking of Olympic glory.  Every time the Olympics air, young children are inspired.  If they’re already in a sport, they may work harder, dreaming of Olympic gold.  If they haven’t yet started a sport, they may want to begin to see if they, too, can be like their Olympic idols.

Yet, as parents, should we encourage these dreams?

The Financial Toll of Pursuing an Olympic Dream

Being an Olympian extracts a heavy financial toll on a family, not to mention the time commitment.

Is this a worthwhile dream for our children, or are we setting them up for failure?

When I was young, my teacher was friends with a family whose college-aged son was training to be a speed skater.  His family had to hold fund raiser after fund raiser just to pay for his training.  Meanwhile, because of the time commitment for training, he was unable to hold a regular job, so he also needed money for living expenses.  In the end, he didn’t make it to the Olympics to compete, let alone try for a medal.

Was all that time pursuing his dream a waste of money and time?

The Financial Rewards of Being an Olympian 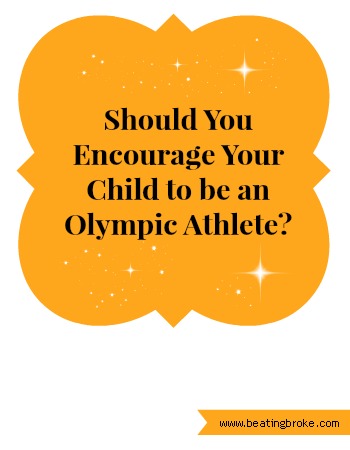 The glory, the fame, and the money from endorsements are only for those who receive a medal, usually a gold medal.  Those who reach this pinnacle can expect a handsome return on their time and money investments.  Take Michael Phelps, Olympic swimmer, who is reportedly worth $30 million thanks to endorsement deals.  Shaun White, two-time Olympic gold medalist for snowboarding, brings in an estimated $7 million a year in endorsements (The Examiner).  Yet, the chance of reaching the pinnacle of your sport is very rare.

Is this a worthwhile dream to pursue?

If an Olympian doesn’t win gold and reap the endorsements, she can often find herself able to create a job as a sports commentator or as a coach.  These can be good jobs that keep the athletes in the field they love.  But is all the money they spent to train for the Olympics worth the career choice?  Can being a coach really help justify the money spent to pursue an Olympic dream?

Many people may argue that the point of the Olympics is not about the finances.  The Olympics are about pushing yourself and trying to reach your goals.  They’re about training to become the best athlete you can be.

This is a noble goal, but is it worth the expense and sacrifice to family, friends, and athletes?

A Better Way to Pursue an Olympic Dream?

If my child were to express an interest in being a world class athlete, I would encourage him to train as he could when he was young, but the goal for me personally would be for him to receive a full ride athletic scholarship to college.  If he could reach his Olympic goals from there, wonderful.  If he couldn’t, then at least he would have had the chance to compete at the collegiate level, and he would also have an education.

Would you encourage your child’s Olympic dreams?  If so, how?

During a typical year, children get two weeks off school during Christmas break, often a week or so before Christmas and a week after.  However, if Christmas falls on a weekend, and if your school scheduled vacation as my son’s did, you will see kids who don’t get out of school for Christmas vacation until December 23rd.  That leaves them with almost two weeks of vacation AFTER Christmas itself, a time that is pretty low on excitement.  (It is so much easier to have a week off before the holiday because there are so many activities for the kids to enjoy.)  You could very likely end up with bored children, especially because all of the activities of Christmas are over just a few days into vacation.

However, there are plenty of frugal ways to keep the kids, especially your preschool and elementary school kids, entertained during the Christmas vacation.  Consider the following activities:

There are simple things you can do to entertain your young children without spending a lot of money.  Employ some of these tactics, and you will hopefully avoid the common vacation chant, “Mom, I am bored!”