Everyone should have a rainy day cash fund.  Not an emergency fund.  Although, you should have one of those as well.  No, a rainy day cash fund should be exactly that.  Cash.  Easily accessible, and easily spendable. Ahhh!  Did he just say “easily spendable”?  Yes.  I did.  Why would I say something like that?  Common advice is that you should put your money in an account where it isn’t easily spendable.  Especially your emergency fund.  You don’t want any everyday “emergency” to drain your emergency fund dry.  It’s for real emergencies.  An engine in a car that stops working and needs repairs.  Although, some would argue that’s what a car repair fund is for. Those quasi “emergencies” aren’t what a rainy day cash fund is for either.  Sorry.  I’m sure some of you wanted me to tell you that it was smart to have a little stash of cash that you could hide away for those tools you really, really, “needed”.  But, it’s not for that.

What is a Rainy Day Cash Fund for? 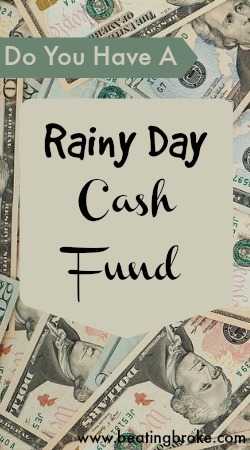 It’s still for real emergencies.  Just not the kind that your emergency fund is for. Consider.  A major power outage happens.  You really, really, need a tank of propane to light up to heat your house until the power comes back on.  You get to the gas station, or wherever you buy the propane from, except they don’t have any power either.  Their credit card reader isn’t going to take your debit card.  In fact, they’re writing down transactions and calculating change with a calculator.  Without power, it’s a cash only transaction.  If you don’t have any cash, you’re headed back to your cold house without any propane to heat the house with. Taken to an even farther extreme (a Prepper extreme, you might say) you could find yourself in a situation where regional or national economies fail entirely.  Of course, having cash in that regional or national currency probably isn’t going to do you much good.  That’s why you hear all the stories about preppers stockpiling gold and silver.  They believe that in a situation of economic collapse, everyone will revert back to gold and silver for bartering with each other.  In the show, Revolution, which is about the total loss of the power grid and the destabilization that follows, you’ll often see people paying each other in diamonds. I’m not saying that you’ve got to have a couple of coffee cans full of gold coins out under the tree in the backyard.  For most of the situations you’ll find yourself in, a little of ol’ greenback will do you just fine.

How Much Cash in a Rainy Day Cash Fund?

Thousands.  Then, please send me a note with your address, and the exact location where the cash is stored. I’m only kidding.  Much like anything else, your rainy day cash fund is a bit variable.  It will depend on what you can afford to just put away in cash.  Although, for most, the rainy day cash fund is well within budgetary limits.  Really, what we’re talking about is having enough cash available that you can afford a tank of gas, or a loaf of bread should you be unable to use a debit card. In almost every case, something like $100 should be plenty.

Where to Put the Rainy Day Cash Fund?

The short answer is, wherever you want.  Just make sure that it’s reasonably secure, and easily accessible.  Buried in a can in the back yard is probably not the best idea.  Your wallet isn’t a very good idea either.  If you’re creative enough, you can find plenty of places to hide that small stash in your house.  If you’re not so creative, there are plenty of pre-devised ways to stealthily hide your money.  Here’s a few easy ones:

That’s just a few ideas.  What it really boils down to is putting a little cash away for a rainy day when you need it, and placing it somewhere where it won’t easily be found by prying eyes. What do you think?  Should you have a little rainy day cash fund?  How much would you put in it?  Where are some other good places to put the cash?

I can’t tell you the number of times that, in our seemingly never-ending struggle with debt, that I’ve seriously contemplated just giving up.  Just throwing in the towel and saying f-it.  You know it’s bad when you catch yourself fantasizing about it.  About how much easier your life would be without the struggle.  Just declaring bankruptcy, taking the hit on your credit score, and moving on with your life.

Even now, after having written about personal finance for over five years, I still find myself in that place occasionally.  We let our budgeting lapse, and inevitably our spending gets out of whack again.  Something happens, and the emergency fund just doesn’t seem to cover it all.  Or, worse, doesn’t seem to replenish itself as quickly as it should.

I can try and lay the blame somewhere.  That always helps, right?  If it isn’t my fault, then I can’t be blamed for it.  I can’t be the one that everyone points to as the failure.  I can deflect that attention to someone or something else.  That helps.  Until it doesn’t.

I failed to negotiate the raise.  I failed to have enough saved up to make that repair.  I failed to budget properly to make sure that we wouldn’t have to cut corners at the grocery store.  Me.  I did that. 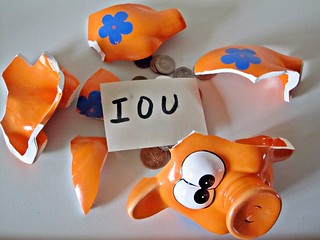