I’m not sure about you, but I have a hard time with keeping myself from constantly over-analyzing everything.  You name it, and I’ve analyzed it.  Even things that I cannot change, like my choice in Colleges.  Should I have gone to a different college?  Perhaps.

If I look at it from a strictly financial perspective, the answer is a definitive yes.  I went to Jamestown College, which is a private school.  While it isn’t the most expensive private school you can choose, it’s not nearly as affordable as a state school would have been.  Instead of the student loan debt that I am paying on now, I would have only about half of it had I gone to a state school.  Maybe less.

If I had gone to a school closer to home, I could have saved money over the summers by moving back in with my parents.  Traveling home would have been a far cheaper endeavor, and certainly would have been a shorter endeavor.  It’s over 950 miles from Jamestown to Hamilton, MT, where my parents live.  Even with the best car I had, mileage wise, it cost at least $200 to drive home and back.  And that’s without stopping along the way at a hotel.   And don’t even get me started on the money I could have saved on laundry by bringing it home and using the washer and dryer at home! 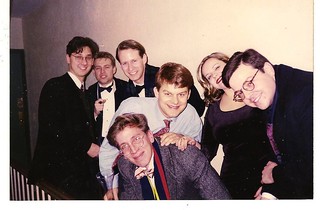 Of course, not every decision in life can be judged solely by it’s financial merits.  (Not that I was all that adept at anything financial back then anyways.)  Something as important as college has many factors that go into it’s choosing.  For me, the money did come into play simply because my family didn’t have much of it, and I needed to be able to get enough financial assistance to go to the college I chose.  I also wanted to play football, so the college had to have a team.  I’m not a big fan of lots and lots of people, so the school needed to be smaller.

Having had pretty good grades in high school, I was able to get scholarships and financial assistance to go to all of the schools that I applied to.  I had ruled out the main state schools as being too big.  They also got ruled out because I wouldn’t be able to play football.  In the end, the choice came down to a smaller state school, a private school closer to home, and Jamestown College.  All offered everything that I was looking for.  All were good schools.  What it finally came down to was friendliness.  Of the three schools I had narrowed it down to, only JC took the time have a enrollment counselor call me.  The football coach at JC was the only one to call me and personally invite me.

Sorry, I’ve gotten off on a tangent, and it’s turned into a bit of a love fest.  But, there’s a reason for that too.  It’s the funny thing about college.  No matter where a person goes to college, the college they went to was the awesomest college ever!  It’s not about the money.  It’s not about the education.  It’s not about the faculty, or even the sports teams.  Those all play a part in the choosing of the school, but, really, play very little part, if any, in how you feel about the school.  No, the college you attend is the best school because of the people you meet, the adventures you have, and the growing up (hopefully) that you do while you’re there.

When I think back on my higher education, I can say that I got a good education, but I can also say that I could have just as easily gone anywhere and gotten a good education.  I was able to play a couple of years of football, and that was cool.  I could have played at several other schools too.  I certainly could have gone to a cheaper school and had less student loan debt when I was done.  But, what really made college, college was the people I met.  Either directly, or indirectly, through college, I met my wife, and made so many friends.  We had so many shenanigans!  And that is what made college worth every penny.

Let’s do something fun.  Tell us all what college you attended in the comments below.  Maybe we’ll find some fellow alumni!  (Also, I’m curious how many of you are Ivy League-ers. 🙂 )
img credit:pwbaker, on Flickr