I used to put everything on the credit card and pay it off in full every month. Then I took Dave Ramsey’s Financial Peace University course. Now I use cash envelopes. All of the benefits of cash envelopes did not become clear to us until my wife and I used them for about three months. My life has improved so significantly from this change, that I wrote this to share with you why I made the switch and to detail the six reasons I’m happy to continue using cash envelopes.

I was the kind of person who kept receipts for everything. I entered them all into Quicken so I could make pretty line graphs and pie charts. I liked to look back at my spending habits, and I used actual annual spending averages to create my budget. Although I do things differently now, I am still that kind of nerd.

However, each month I would go about my usual (relatively frugal) spending habits, with no regard for this “perfect” budget until the end of the month. Then I would add up my receipts and see where I overspent and underspent. I would tell myself, “Okay, I need to go out to eat less” or “This was a big month for clothes (because I actually bought something), but annually I haven’t overspent.”

I was looking back at my spending, but looking back isn’t control. My budget wasn’t a plan. It was just a feedback tool for my habits. It was a reactive way of managing my money. First I would spend my money, then I would look back to see if I should have spent it differently. Does this sound familiar?

[Tweet “First I would spend my money, then I would look back to see if I should have spent it differently”]

Cash is dirty, filthy, germy, and gross. I hated touching it. I preferred my cleaner credit card. I liked the rewards points, too. So what would make me want to use something I consider unsanitary?

I wanted me and my wife to take Dave Ramsey’s Financial Peace University (FPU) so we’d be on the same page financially, and so if something happened to me she would know where our money was and what bills needed to be paid. Taking the course accomplished this mission, but it also revolutionized the way I manage money. 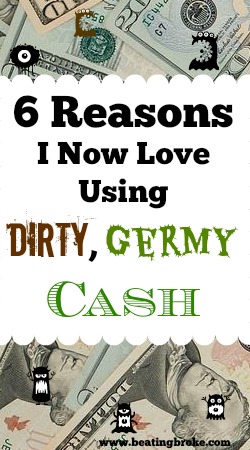 Switching to cash envelopes was a leap of faith that I decided to take because of other benefits from the FPU class. My wife and I were working on our zero-based budget. Having taken care of the “four walls” (home, food, clothing, and transportation), we were deciding where we were going to spend the other part of our income. We made a list of all the things we wanted, which was, of course, longer than our money was.

We had to prioritize, so we compared categories like dining, gift giving, gym memberships, and “garage sale” money. My wife suggested to me that we cancel cable. I was astonished. I had asked her about cancelling cable in months prior, and she made it clear that having cable was a big deal for her. I wasn’t even going to bring it up, but now she was suggesting to me that we should cancel cable. Why did she change her mind?

My wife noticed we could use the money from cable to fund three other categories instead. The opportunity cost of cable was too high. Opportunity cost means that if you spend money on one thing, those dollars cannot be spent on something else. Plus we had Netflix and the Internet, so we weren’t doing anything crazy like giving up TV completely. Our zero-based budget helped my wife see the opportunity cost of cable, so she decided to cancel it. Since the practices taught in FPU could accomplished what seemed to me to be impossible, I was willing to try dirty, filthy, germy cash.

We Learned How to Use Cash

Many of our bills were automatic transfers and withdrawals. Everything else was put into cash envelopes, in the amounts my wife and I had decided to allocate in our FPU zero-based budget. It was like learning to ride a bike. We didn’t do everything perfectly the first couple of months. By the third month it became quick, easy, and natural to use cash envelopes.

Two years later, my wife and I are still using cash envelopes. We still make changes to our budget and envelope system, as our needs and wants continue to change. If you follow my example, expect some mistakes as you climb the learning curve. However, keep an open and flexible mind as you go through the process.

Benefit #1: I am the General of My Army

The first and greatest benefit of cash envelopes was that I, for the first time in my nerdy-budgeting life, truly felt like the captain of my ship. My money was like an army and I was the general, telling it where to go and what to do. The process of budgeting was no longer reactive. Instead, my wife and I decided what was important beforehand and allocated our resources (cash) to it. We were directly in control of our money, instead of indirectly controlling our spending by trying to exert discipline over our habits.

Instead of evaluating our spending decisions after they happened, we were pushing our money toward categories that were important to us in the amounts we deemed appropriate.

[Tweet “My money was like an army and I was the general, telling it where to go and what to do”]

I don’t need to look back at our budget to figure out if we were overspending. It is right there in the envelopes. If we have cash in the envelope, then there is money to spend in that category. If we spent all the cash, then we’d have to consider other options (a topic worthy of its own article). This is the reality of living with finite financial resources.

There is no cheating or fudging with cash envelopes. If we want to be big spenders today and get appetizers and drinks and desserts, then we are choosing not to spend that money on something else, such as clothes, cars, or other dinners out. We can’t throw it on the credit card and hope it all smooths out in the long run. We cannot take “Option A” and use DEBT to get “Option B” as well.

Benefit #3: I Make Spending Decisions Like a Mature Adult

The opportunity cost of our spending speaks loud and clear when I am handing over Benjamin Franklin to a cashier. My wife and I may still decide to do some big spending, but we will do it knowing full well that we chose that as a priority over the other options we could have pursued with that money.

Contrast adult maturity to how a child behaves. Spending is based on insistent “I want it,” and perhaps some pouty foot-stomping. The buying decisions of a child (or immature adult) are dictated by how he or she feels at the time. Priorities, financial goals, and opportunity costs don’t factor into immature spending decision. This kind of emotional spending, by the way, easily falls prey to savvy sales tactics.

Benefit #4: I can Relax and Enjoy My Spending

My emotional reaction to spending changed. Instead of wondering if a transaction was going to become part of another month of overspending, I knew that I could not go over budget. I don’t have to worry about overspending, because when the cash runs out the spending stops.

My budget is now a source of peace, confidence, and enjoyment instead of a straight-jacket of guilt or hand-slap of shame. The money I was spending was put in that envelope specifically for the purpose of being spent on this item. There is no guilt or worry. I can spend it joyfully and be confident that we are living within our means.

I am amazed at how using a credit card was causing an unconscious increase in spending. In FPU, Dave Ramsey talks about how using plastic doesn’t have the same neurological response as spending cash. Plastic doesn’t trigger the pain centers like giving up cash does. For this reason, Dave reports that using plastic results in 12-18% more spending than if you use cash.

My wife and I have always considered ourselves frugal. I didn’t think we could reduce our spending by 12-18%. The change was so subtle, I didn’t realize we had reduced our spending so much until the third or fourth month’s cash withdrawal. Since I have experienced this first-hand, I’m a believer.

Cash envelopes are contributing to my son’s financial education. Coins don’t fit well in envelopes, so the change from every transaction goes into my son’s piggy bank. About once a month we deposit this money into his savings account. He will someday use this money to pay for college or a house.

My son enjoys putting the coins into the slot of his piggy bank. He gets applauded for saving, even though I know he doesn’t understand money. He also gets to wash his hands right after handling the coins, which he also enjoys. I let him carry the coin container to the teller. He loves to lift stuff and show how strong he is.

I know he has no idea what a bank is, but he’s participating in the act of saving and handling money at an early age. He is learning and practicing habits that he will carry into his adult life.

Now Go Into The World… and Take Some Cash

I encourage you to stop looking back at your spending in an effort to control it. Put your discretionary funds into cash envelopes. Tell your money where to go proactively instead of wondering why you overspend. Be prepared to deal with the reality of finite resources. Don’t try to hide from the truth! As you spend out of those envelopes, do it joyfully and confidently. Enjoy yourself and have peace knowing that you are living within your means. Tell your inner nerd, “The budget is okay!”

May we all learn to be the best stewards we can of the resources (not just money) that God entrusts with us. As we learn and grow, know that He always has more to give. We will be presented with these gifts when we are ready and able to handle them.

I wish you all health and happiness,