If you’re currently a teacher, you likely know that while this occupation can be rewarding, it doesn’t pay very well.  You may be looking to supplement your income in the evenings or the weekend.

If you’re a former teacher who is now staying home with your kids, you may be looking for a way to bring in money utilizing your teaching skills.  However, you’ll need flexibility so that you can do your work when your children are sleeping at night or napping.

Luckily, there are plenty of ways to earn a side gig with your skills as a teacher.

One of my friends worked at Nielsen, became a high school math teacher, and then stayed home when she had children.  For the last 10 years, she has been a private math tutor.  She gets her clients from referrals from her former colleagues and through word of mouth thanks to satisfied customers.  She makes several hundred dollars a month and enjoys being able to still teach even though she is no longer working full-time.

If you have a bachelor’s degree, you can get apply for a job at VIPKID teaching children in China how to speak English.  Most of the available tutoring hours are very early in the morning or late in the evening when your kids are likely already in bed.  You can set your own schedule and decide how many hours you want to work each week.

Depending on your experience, VIPKID may pay up to $22 per hour.

Many former teachers make a nice income developing curriculum and selling it on Teachers Pay Teachers.  Other teachers are always looking for quality curriculum material and homeschoolers also take advantage of the site.

A number of prestigious colleges such as Johns Hopkins, Duke, and Northwestern offer online classes for gifted children.  You can teach here, and the schedule offers flexibility as you can decide what semesters to teach and what classes to teach.  You’ll be able to challenge gifted students, and you’ll have students who will likely challenge you, too.

If you don’t want to work with gifted students, you can also look at the many online schools available for K-12 students.  You can teach from home, and you may have to have a live course or tutoring once a week.  My kids were enrolled in an online school this year, and every time they had a tutoring session or interacted with their teachers, the teachers always worked from home, which provides a great deal of flexibility.

If you’re a teacher looking for extra income, you can see that there are a variety of ways to do that, and this list isn’t exhaustive. Here’s another list of ways to make extra money that’s not focused on teachers, but could certainly apply to teachers.  If you’re a teacher who opted to stay home with kids, there are many ways you can work from home using your skills and keeping current so you’ll be able to reenter the teaching workforce should you decide to in the future.

If you’re a teacher or were a teacher, have you found ways to turn your skills into a side gig or part-time income stream?  If so, what do you do?

Working part-time is a rite of passage for many teens.  Teen employment can lead to increased independence—new friends at work, extra spending money, money to save, etc.  However, teens should think carefully before applying for and taking a job.  Ideally, they won’t just by default apply to the local restaurant or fast food restaurant.  Instead, they should choose a job that matches their goals and aspirations, if possible.

Before the job search begins, you and your teen should consider these questions:

What is your teen’s interest?  What is your child interested in and good at?  What kind of job could he do that he would enjoy and that wouldn’t feel like a grind after a few months?  If he loves animals, maybe he could consider working at a pet store or a dog groomers.

What career is your teen considering?  If your child is a junior or senior in high school, she likely has a career choice in mind.  If she’s choosing between several, now is the time to learn more and help her narrow down her choices.

When I was a senior, I worked at a vet clinic.  I had the opportunity to work with the animals and even observe surgeries.  I had been toying with the idea of being a veterinarian, but after a summer at the job, I decided I didn’t want to invest all of the time and money it took to become a vet.  The job just wasn’t one I’d enjoy that much.

Ideally, your child’s job can help them discern if this is the right career path for them.  If it’s not, you and your child have saved thousands on an education they might not have used in the future.

What is your teen’s temperament?  How does your child do under pressure?  Is he introverted or extroverted?  Jobs available to teens can vary widely.  Some jobs will have them interacting with the public regularly while others will not.  Choose the job that best fits his temperament.

However, sometimes a good job that doesn’t perfectly fit your child’s temperament can provide learning opportunities, so also consider that a stretch in comfort level isn’t all bad.

Also, don’t be afraid to end the job if it is distracting your child from his ultimate goals.  Too often, teens take what looks to be a good job only to be given more work hours than they can handle, which causes their schoolwork to suffer.  Getting experience in their chosen field IS important and can help them get a better job later in life, but they also must focus on their studies.

Did you have a job as a teen that helped open doors for you or helped you choose your career field, or did you simply work whatever job was available?

Could the landscape of student loan repayment be changing?  I have to admit, I don’t cover a whole lot of college topics here (because I’m a bit removed from that age group), so I almost missed this altogether.  But, it kept coming through on feeds, and it finally piqued my interest enough to get me to take a look.  I’m glad I did, because it’s actually gaining traction and could be something that becomes normal in the years to come.

What is the Oregon Pay it Forward loan repayment plan? 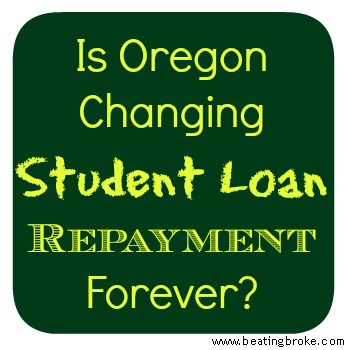 Pay it Forward seems to have had an interesting life cycle. It was originally devised by a class of college students, working with the Economic Opportunity Institute, and then presented to the state legislature.  From there, it appears that the Working Families Party of Oregon, who happen to have been co-founded by the students’ teacher, took it under their wing and started pushing it.  According to this article in the New York Times, the resulting bill passed the Oregon House and Senate earlier this month.

From there, I would imagine that it’s got all kinds of structural work to be done in order to put the systems and processes in place to be fully functional.  But, once that’s done, it should become available to students in a few select universities and colleges sometime around 2015.

The plan, as it’s stated on the Working Families Party of Oregon website, will operate with a dedicated fund from which the tuition will be paid to the school.  After the student graduates, and gets a job, the student will then pay a fixed % of their salary back into the fund for 20 years.  The % that the graduate pays will depend on how much schooling they’ve received.

That should account, mostly, for the discrepancies of cost in tuition from a two-year degree vs. a full four-year degree.  The website also states that should a graduate be unemployed, there would be no repayment necessary until the graduate attains a job.

Is the Oregon Pay it Forward plan a good idea?

In my opinion, it’s both good and bad.  It all depends on how you look at it, really.  If you’re like me, and intend to work in a profession that basically requires a degree of some sort to even get your foot in the door, it could be a really good deal.  Heck, I’ve been out of college for 7 years.  Almost half way to their repayment period.  I’m not even close to half way to the end of my student loans, yet.

So, in that way, the plan might be a good thing.  It lowers the financial barrier to higher education, and makes less of a burden of the repayment of any tuition bills.  The lowering of barriers is also why I think it could end up being a bad thing.

Part of the reason that I think the higher education system is under so much fire is because it’s already too easy to get a student loan and go to college.  If anyone can do it, suddenly everyone must do it. If you want any sort of foothold in the professional community of your choice, you’ll need that degree.  That causes problems.  Demand for a college education never decreases.  The law of supply and demand says that the supplier (colleges in this case) can charge whatever the market will bear based on the fluctuations of demand.  If demand decreases, so too should supply.  If you want demand to increase, you reduce the cost of whatever you’re selling until demand begins rising again.  But, if demand never decreases, why should the cost of the education?  The supply of college attending students increases, increasing the demand for classrooms to teach them in and professors to teach them with.  School expenses increase due to the new buildings and additional staff.  If the fund for the plan doesn’t keep up, the money has to come from somewhere else.  Know where?  The state.  More specifically, the taxpayers of the state.

It’s too early to pass judgement on whether the plan will work or not.  Heck, the ink is barely dry on the bill itself.  It’s still got all kinds of tape to work it’s way through before it can begin being used.  I doubt that we’ll see any real results aside from an increased enrollment in the schools that pilot the program for at least 5-10 years.  Remembering that repayment likely won’t start for 4 years from the first enrollment.

I think it’s clear that the current state of student loans and their repayment needs to be reworked.  It’s unclear, however, whether this plan is the right answer.  It might be part of the answer though.  Combine something like it with a more rigorous acceptance process, and you might have a winner.

What do you think?  Is Oregon changing student loan payment forever? Is the program the right answer?  What would you change?  Would you have used it if you had the opportunity when you enrolled in college?  (I would have)