As I was watching the USA basketball team on their way to a gold medal in the Olympics yesterday, the commentators said something that stuck out to me.  I don’t remember it verbatim, but it went something like this: Is it joy on their faces, or relief?  The commentator went on to say maybe it was a bit of both, after all, this was a team that wasn’t supposed to lose.  So, yes, in a way, there was some relief in the fact that they didn’t lose when they weren’t expected to. 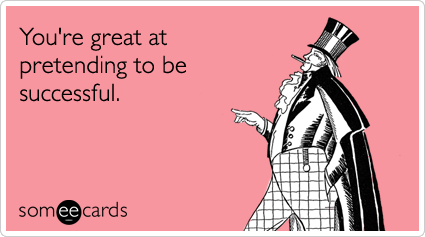 Which got me to thinking.  Are we afraid of failing?  And the answer is, of course we are.  We’re afraid of failing at lots of things.  It’s another of those learned fears that we aren’t born with.  Watch any young child trying something, and you’ll notice that they fail several times before they finally get it right.  Sometimes they just learn that something just doesn’t work that way, and find the way that it does work.  If that square peg doesn’t fit in the round hole, they’ll eventually find the square hole that it goes in.

But, somewhere along the way, many of us gain a fear of failing.  So much pressure and expectation is laid upon us to succeed, both by our parents and by society at large.  No longer is it something where we’re learning something new (even though we usually are), but expected to get that new thing right on the first try.  And, like the USA basketball team, when we do get it right, we are just as full of relief that we didn’t fail as we are full of joy that we succeeded.

That quote is probably one of the most quoted lines of dialogue in the entire Star Wars series of movies.  David Brin, a sci-fi author thinks that and many of the other actions of Yoda make him “about the most evil character that I’ve ever seen in the history of literature“. Why does Brin hate Yoda so much?  It’s better if I let him say it:

unable to name for me one scene in which Yoda is ever helpful to anybody, or says anything that’s genuinely wise. “Do or do not, there is no try.” Up yours, you horrible little oven mitt! “Try” is how human beings get better. That’s how people learn, they try some of their muscles, or their Force mechanism heads in the right direction, that part gets reinforced and rewarded with positive feedback, which you never give.

There’s also a very nice commercial that features Michael Jordan talking about how many times he’s missed shots, lost games, and been counted on to make the game winning shot and missed.  He goes on to say that it’s because he failed all those times that he was as good as he was.

So.  Why are you afraid of failing?  Failure is a part of the learning process.  It’s how we learn how things work, what methods will succeed, and how we make ourselves better.  Don’t be afraid of failure.  Be afraid of not trying.