Early yesterday morning, I awoke to my wife jumping out of bed.  “Do you smell smoke?” She asked.  Let me tell you, there are few things that will pull you out of that just woke up groggy state than a question like that.  And, sure enough, I did.  A quick check told me that there was no visible fire or smoke in the upstairs portion of our house.  It wasn’t clear what the source of the smell was.  I quickly ran downstairs to check the rest of the house, fully expecting to find a smoldering spot somewhere.  Nothing.  Down to the basement.  Nothing.  Back upstairs.  Still nothing, but the smell is still there.  I went from room to room, floor to floor, sniffing the air trying to pinpoint where the smell was strongest.  The good news was that it wasn’t getting any stronger, but I still didn’t have  source for it. The only thing that I can find is that the furnace doesn’t seem to be working.

By this point, my wife has gotten the kids up, and is working on getting them dressed just in case we have to make a hasty exit from the house.  There isn’t any immediate danger, I don’t think, but you just never know.  It just so happens that a close friend is a member of the rural fire department here.  We’re in the city fire department district, but it doesn’t hurt to ask, so we called him for some quick advice.  I quickly fill him in, and he suggests that I call the city fire department and have them come check the house for carbon monoxide and also do a hotspot check with their thermal imager.  I certainly didn’t have to be told twice, so that’s exactly what I did.

A couple firefighters show up, give the house a quick once over and come to the same conclusion that I have.  The furnace has gone out.  And, for some reason, has filled the house with the smell that we awoke to.  They can find no hot spots, and the CO tester is not indicating any CO threat.  We cut the power to the furnace, and everyone agrees that there is no immediate threat.  We can go about our business.  Well, with the exception of calling the furnace repair folks in to figure out what’s wrong with the furnace.  Some of you might not think it’s a big deal, but we still haven’t seen 30 degrees in March.  The nightly lows are in the single digits.  In just the short time that the furnace has been out, the temperature in the house has dropped 10 degrees. 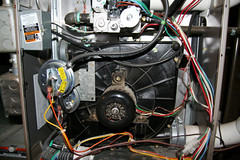 I called the furnace repair company, and, to my surprise, they sent one out right away.  Luckily, I caught the guy as he was headed out the door for a call, so he could easily be rerouted to our house.  A couple hours later, and we had a working furnace again.  Turns out, the blower motor that pushes the air through the ductwork and into the house had stopped working.  It lost its bearings.  Literally.  The result was that it started to leak some lubricant oil and actually melted some of the electrical work in its housing which is what made the stink.  The company bills for the repair, so we only have an estimate as to what the cost of the repair will be.  The repairman thinks less than $200.

But, to a lesser degree, we’re lucky, because we can afford the repair.  It wasn’t that long ago that an unexpected bill for $200 would have had us wondering if we were going to have to choose bills to go unpaid.  But, we took control of our finances.  We’ve got a long way to go, but, a $200 emergency doesn’t mean that a bill goes unpaid.  And, that makes us feel safe too.