In late 2011, I won a new iPad 2.  By March of 2012, it needed new glass.  My son, who was 5 at the time, managed to drop it off of the couch while playing with it, and put a big crack in the digitizer (that’s what the glass is called).  The iPad still worked, most of the time.  I contacted Apple, in an attempt to get the iPad repaired through an Apple service call, but, what Apple does with that situation is sell you a refurbished ipad of the same model for a reduced price and then take the old one off your hands.  By the time Apple would have been done with me, the “repair” would have cost me about $400.  Yes, the iPad is cool, but it isn’t $400 cool.  (My wife and kids would argue that point though.) 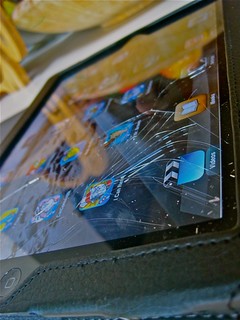 Being the frugal shopper that I am, I did a little looking around.  Turns out, you can purchase the repair service on eBay

.  Ship off your iPad with the broken digitizer, and the seller replaces the digitizer for you and then sends it back.  The service that I ended up purchasing was a $79.99 service with a $10.98 shipping charge.  Once it was all paid for and the iPad was back in my possession, it ended up costing me right at $100.  If you’re doing the math right now, the $79.99 and $10.98 don’t really add up to $100.  What I had failed to add in was that I would have to pay to have it shipped to the seller as well.

Want to know how long the repaired digitizer lasted?  If you guessed “less than 30 days”, you’re right!  Yep.  Sad isn’t it?  After it got back from the first repair, I even put a fancy case on it from OtterBox, in hopes that it would keep it from having the same fate should it fall from the couch again.  But, even that fancy case couldn’t save it from a trip down the hardwood stairs of our house.  There’s something chilling about hearing the thuds of an iPad as it bounces down the stairs.  I suppose that could be attributed to the three year old at the top of the stairs that could have just as easily been what was making the thud sounds.  Luckily, it was just the iPad.

I certainly didn’t want to pay another $100 a month later to have it repaired, so I did what any self respecting techie would do.  I started doing research on repairing it myself.  I could buy a replacement digitizer for about $50, and if I could figure out how to do it myself, I’d save 50% on the second screen repair.  I watched a few youtube videos of repairs being done, and decided that it was worth a try.  Worst case scenario, I failed and had to send it off, losing the $50 in parts and some time.

We actually left the iPad with the second set of cracks for a while.  In fact, it lasted until just last week when it cracked a little bit more and actually became hazardous.  So, parts in hand, I set to replacing my own iPad digitizer screen.  While not terribly complicated, the iPad is full of little parts.  Little parts scare me. 🙂

Two hours of work later, and the iPad is good as new.  Well, close anyways.  The digitizer is replaced, the iPad is all put back together, and, miracle of miracles, it all works!

I spent $100 to have someone else do the first repair.  The second time, I spend $49 on the parts and did it myself.  My savings on the repair were $51!  It took me a bit under 2 hours, so I effectively “made” about $25 an hour.  Not bad.  Wages like that make me wonder if there isn’t money to be made in performing the service as a side hustle!  Or, maybe buying busted iPads and replacing the parts and reselling them once they are fixed.

Obviously, I have a technical background.  I’ve been tinkering with computers for just about as long as I can remember, and spend most of last summer working part time at a computer repair store.  I have the skills to do the repair myself.  Which made it pretty easy to make the decision to do the repair myself.  Someone without that background might want to think twice before attempting it.  But, with the abundance of how-to videos on youtube, and all the information on the web, maybe it’s worth a try anyways.  You can save some money on the repair, and learn a new skill!

Have you ever done your own DIY repairs on something as costly as an iPad?  How did it turn out?