This spring, frustrated by the lack of any good growing space in our yard, we decided to give a container garden a try.  We bought up a whole bunch of pots to put everything in, got some good potting soil, and planted away.  Once we were done, we planted a couple pots of tomatoes, a couple pots of cucumbers, a longish pot of green beans, a pot of green peppers, a longish pot of carrots, two pots of onions, and two large pots of potatoes.

Last weekend, with the low temperatures in the forecast dipping below the 32 degree mark, we decided it was a good time to pull up the root vegetables, and pick anything that was ripe.  Considering the few silly things we did, and the terribly hot summer we had, I think we did O.K. 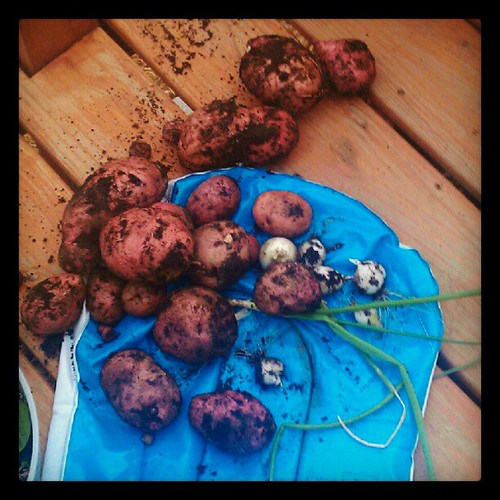 In the picture, you can see some of what we pulled up last weekend. I wasn’t quick enough on the camera trigger to get pictures of the carrots or peppers before they got taken into the house. Also not pictured are any of the cucumbers, beans, or tomatoes we’ve harvested throughout the summer, or any of 10 or so potatoes that we pulled out from the bottom of the potato bag in August.

Overall, I’d have to say that I was slightly disappointed with the harvest.  None of the onions grew to very good size.  What cucumbers we did harvest were all seeds and no flesh.  The heat really played havoc on most of the plants in the containers.  There were several weeks where the plants really needed to be watered every night, but we were either gone, or didn’t get home in time to do it.  I also made the mistake of planting a few too many plants in some of the containers, and I think they got crowded which stunted their growth.

The quality of what we got, however, was pretty good.  Fresh potatoes taste nothing like what you get from the store, they’re so buttery and sweet.  The onions, while small, were very good as well.  My wife made a salsa with some of the tomatoes and onions, and it was very, very good.

I’ve already got a pretty good mental list of the things that I’ll be changing next year.

How did your garden turn out this year?  Do you plant in a garden or in containers?