Have you ever considered what life would be like if you quit your job?  How would you provide for yourself and your needs?  Could you live without money?  Is that even possible in our modern era?

It is possible to live without money, but you would have to put aside some of the creature comforts your used to.  You would also likely work just as hard as you do now, when earning a wage.

How to Live Without Money

To successfully live without money, you need to find ways to find shelter and food, at the minimum.

Where to Live for Free

Sure, you could couch surf if your friends are agreeable, but there are other ways to find shelter without paying cash.

Take Care of An Elderly Person

Some elderly people would like to remain in their own homes, but as they age, they need more assistance.  They hire live-in care givers who take care of them in return for free room and board.  If you have the right skills, this can be an excellent way to find shelter for free.

Another option, if you’re handy, is to take care of the maintenance in an apartment building in return for a free apartment.  This option is more suitable if you live in a large city.

How to Eat for Free

Eating for free can be trickier than finding a place to live for free.

If you’re trying to survive with no money because you’re in a difficult financial place, you can visit a local food pantry.  They will likely give you enough food for a week if you’re careful.

Likewise, you can visit a local soup kitchen and get a free meal.  If you live in a bigger city, you may be able to go to a different soup kitchen every day to get a hot meal.  Again, this is an excellent choice if you’re financially struggling.

Volunteer at a CSA

If you have a farm near you that offers CSA subscriptions, you may be able to barter for food.  Some CSAs (community supported agriculture) will trade five or ten hours of work a week for a CSA box.  This will likely not provide all of your nutritional needs but will supply your fruits and vegetables for the week.

Lastly, some people dumpster dive for food.  While this may sound disgusting and unsanitary, not to mention dangerous, there is an entire community dedicated to avoiding food waste by dumpster diving.  You’ll want to take adequate precautions, but you can get quite a large amount of food by rescuing restaurant and grocery store cast offs.

Trying to live without money is challenging.  I’ve given suggestions for getting a place to stay and food for free, but what about the other things needed in our current society?  How would you pay for a car and gas?  Clothing?  Some people simple forego a vehicle and only use the clothes they have.  If you determined to live without money, you can.  Other people have, at least for a few months or years.

Free Alternatives for Things You Currently Pay For

8 Free and Cheap Things to Do With Kids This Summer

Can You Earn a Stable Income By Only Freelancing

In my post “Are we Doing Personal Finance Wrong“, I talked a little bit about “Financial Freedom”.  Of all the comments that the post got, that was the one thing that was mentioned most of all.  Which, to me, means it bears some further discussion.

What is Financial Independence, for me. 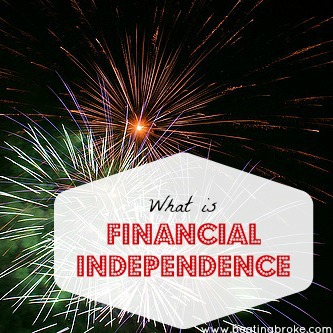 My definition of financial independence is likely pretty similar to most.  In it’s most broad sense, I define it as the ability to not be swayed by financial needs.  Breaking it down a bit more, it means not “needing” a job just to make ends meet.  It means not “needing” a job to keep a roof over my head.  It also means having the ability to take advantage of opportunities to improve my situation.  Whether that means having the cash on hand to be able to buy or start a business, buy a rental property, or just take a month off to travel or learn something new isn’t all that relevant.  It’s that I have that ability.

Something that needs to be said here is that at one point, not that very long ago, I thought of it as being synonymous with “independently wealthy”.  Which may or may not be true depending on your definition of independently wealthy.  For sure, I don’t believe that it matches up with the definition I had back then.  Back then, I would have told you that independently wealthy meant retirement and not doing a dang thing.  Sitting on the beach all day, every day, being utterly non-productive.  That definition has changed.  A lot.  Financial independence, if it’s synonymous with independently wealthy, doesn’t mean that you don’t work, but that you have the financial freedom to do the work you want to do.  Because you are free from the “need” part of the financial equation, you have the ability to do the work that you feel called to do without regard for how much it pays, whether it’s part-time or full-time, or whether it’s a short term project or not.

What is Financial Independence, for you.

As I mentioned above, your definition might differ slightly (or a lot) from mine.  Maybe, for you, it really does mean sitting on a beach somewhere, doing nothing.  Maybe it means not having to work and spending all your time volunteering instead.

However our definitions might differ is somewhat irrelevant.  Our personal definitions still mean that it’s something worth pursuing to each of us.  And, if our end-game is to be financially independent, I still don’t think we’re doing personal finance right.  I still don’t think we’re even close.  I think we need to break away from the systems we have, find the ones that work for our personal finances, and then achieve our financial independence.

The Path to Financial Independence.

Much like our definitions differ, so too will our path to financial independence differ.  Undeniably, I think that the first landmark on that path has to be the complete and utter destruction of all debt.  Before we worry about anything else, we have to be free of the yoke of debt.  Joan Otto, the community manager at Man Vs. Debt, wrote about this recently specifically referencing retirement accounts.  Take a minute or two and read it.  Then, pay special attention to the comments.  Aside from a few people, almost all of the comments are people who think she’s off her rocker.

Is she off her rocker?  Or is she just developing a new system for her personal finance that leads towards her financial independence?  It takes a certain amount of courage to admit to the thoughts and ideas that she does in that post.  (I should know, see: Why I’m Withdrawing from an IRA)  But, then try and remove what you’ve been taught about retirement and saving from your mind for a minute and re-read section 4 of her post.  She’s not being irrational.  In fact, I’d argue that she’s being overly rational.  I think I’ll have to write more about that in another post, but the Vulcan, logic loving, part of me thinks she is right.

Our paths to financial independence will vary.  Some of those people in the comments of Joan’s article will achieve it using the current system.  Many of them will have started saving early, and found ways to drastically save.  But, will they have the liquidity available to make a move on an opportunity in the 30’s, 40’s, or even 50’s?  Or will it have to wait until they’re past “retirement” age and have penalty free access to their nest eggs?

Find your path.  Start the journey, and achieve your financial independence.

Have you already started on your journey?  Have you found your path?  Have you achieved your financial independence?  There are many of us here, including myself, that are new to the journey or haven’t even begun yet that could benefit greatly from your story.  Will you share it with us?