Each and every year, for the last several years, I’ve said that I plan on finding a space for a compost heap and create one.  Several years ago, I went so far as to take all of the grass trimmings and garden trimmings and dump them into a pile in the back yard.  And that’s where they sat, untended, and somewhat forgotten.  I’m still hoping that this year is going to be the year that I get off my duff and actually create the compost pile that creates actual compost.

Every year, we end up buying several bags of garden dirt for our container garden, and it would be really nice to be able to just walk into the back yard, and load up the wheelbarrow with fresh dirt from the compost pile and add that to the dirt we already have before planting our garden.  A few days ago, I spotted this TED talk, which threw my idea of compost for a little loop.  You’ll have to watch it for the full rundown, but basically, the speaker is saying that we’re doing compost wrong.

How should we be doing compost?

Mike McGrath, the speaker, suggests that the commonly held belief that you just grab all the clippings, leaves, junk mail, and kitchen scraps is wrong.  According to him, those things don’t really compost all that well because they don’t break down very easily.  Instead, he suggests that your compost pile should consist of mainly the leaves from the trees when they are shed in the fall.  All the rest, your kitchen scraps and paper bits, he suggests would be better off in a vermi-composter, or worm farm. 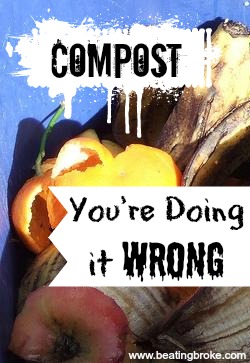 If it’s Not Broken, Why Fix It?

The method of throwing pretty much everything into a compost bin or tumbler is a pretty old method.  It’s the way that people have been doing it, and suggesting you do it, for years.  It obviously works to some degree, or it wouldn’t have reached that point.  The first few times it failed, people would have decided it wasn’t a very good way to dispose of refuse and would have moved on to something that worked better.  In short, it doesn’t appear to be broken, so why should we go and fix it, as Mr. McGrath suggests?

I think it’s about efficiency.  If you want to take your refuse (lawn trimmings, leaves, kitchen scraps, etc) and break it down into usable compost (a.k.a. super-dirt), doing so as efficiently as possible make some sense.  Of course, most people usually choose one or the other method (everything in a pile, or vermi-composting) so I haven’t been able to find any good examples of someone doing both.  I don’t think that McGrath would have any opposition to a person adding worms directly to a compost pile.  It’s probably not as efficient as having an actual vermi-composting setup where you can harvest the castings and throw them in with the leaves.

How do you Compost?

Here’s the place in this post where you get to help out the readers of Beating Broke.  Do you compost?  How do you compost?  What do you think of separating the leaves and the kitchen scraps into two systems? Too much work?  Ideal?