First, this is a personal finance blog.  As such, I try very hard to not comment too much on politics and keep them out of my articles.  But, should I?  Do politics have a place in personal finance?  Do our financial beliefs have any bearing on who and how we vote?  Should they?

I think the short answer is yes.

Whether we like it or not, politics and politicians play a significant part in how our finances play out.  The laws and regulations that they enact have the ability to cause widespread change in how we earn, spend, and save money.  Some examples: 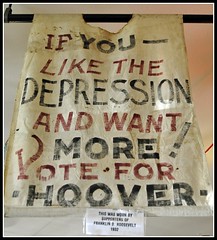 Politics Changes How We Earn

Recent legislation has raised the minimum wage so that many of the workers who were making minimum wage are now earning more per hour than they were before.  The legislation, in effect, gave many of those workers a pretty big raise.  Of course, the opposite can be true where many companies, feeling the pinch of having to pay that much more per hour, were forced to reduce hours or the number of workers causing some to make less than before. Temporary reductions in payroll taxes have added dollars to our paychecks.  Proposed changes to Social Security could change that again, and could change the way retirees earn their SS funds back.

Politics Changes How We Spend

The most obvious example of how politics can change how we spend money is taxes.  The tax rates that we pay, both federally and locally, can cause us to spend less on some items.  They can also cause us to spend a bit more when we receive a refund each year.  Another good example is the recent legislation that changed the way interchange fees work and caused many banks to raise fees to compensate.  Instead of compensating, many of us moved our accounts to Credit Unions that weren’t charging the new fees.  State sales taxes can drive sales across borders, especially when a bordering state has no sales tax.  Tax credits and deductions have caused millions to be spent on home improvements, energy efficient appliances, electric and hybrid cars, and even the birth of children.

Politics Changes How We Save

Regulations and laws determine the methods of investment for most every investment vehicle publicly available today.  With each new legislative session, new regulations and laws are passed that affect how investments and savings vehicles are able to operate and function.  Any new scandal, like the recent Madoff Ponzi scandal, or the less recent Enron failing, causes a flurry of new regulations and laws that are meant to prevent similar situations from happening, but also result in increased administrative costs that get passed down to the investor.  Tax incentives for certain retirement savings accounts cause added funds to be added to retirement accounts as a tax shelter.

I don’t think that there’s any doubt that politics and the politicians that play them play a huge part in our personal finances.  The laws and regulations that they enact each session make changes to the entire financial field.  Especially in the last few election cycles, there’s been a lot of focus put on the economy as a whole, and how the recent slump has been caused by this politician, or that politician.  There’s lots of blame going around, but in the end, I think it took a concerted effort by a bunch of folks.

As this election cycle heats up with local primary elections this spring and the presidential elections in November, I urge you to take a good look at who your choices are, and inform yourself on their stances on ALL the important areas of your life.  Too often, we look at a politician and judge them based on just one of their platform stances.  “That one is Pro-Choice! I can’t vote for him”.  I think that’s a mistake.  You’re unlikely to find any politician that agrees 100% with all of your views.  Find one that agrees with the most of your viewpoints, and vote for that one.  If you don’t know where they stand, find their campaign website and find out.  Contact them if you have to.  But, educate yourself before you blindly go into the voting booth.  The worst thing you can do is vote based on a gut feeling, or vote blindly without knowing who you are voting for.  Your finances may depend on it!