When my husband and I got married, we were flat broke.  Broke.  We bought the cheapest wedding bands that we could find, and my diamond is small.  However, that was my preference.  I wanted to stay within budget, and I personally like smaller diamonds rather than the big rocks that some women wear.  (All I could think was that when I had babies, I’d accidentally scratch them with a big ring.)

Still, there have been times that I’ve been in the presence of a group of women, each with a huge rock on her hand, and I’ve been a bit embarrassed by my small diamond.  I’ve wondered what other people thought of us and our financial situation.

In high school, peer pressure is at its peak.  If you want to be popular, you have to follow what the other kids are doing.  I didn’t cave to peer pressure often.  Instead, I had a few close friends, and I followed the path that was important to me.  I was relieved when I graduated because I thought the peer pressure would finally be done.

In college, I found that the peer pressure did relent.  People would respect your choice if you didn’t do what they were doing.

However, as I got older, I began to realize that there are societal norms that you’re expected to maintain.  This becomes the “keeping up with the Jones'” phenomenon. 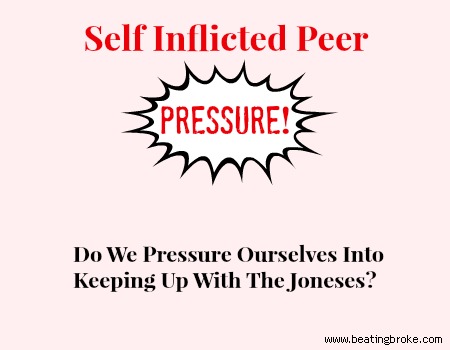 My husband and I are digging our way out of serious debt.  We are scrimping and saving, knowing that in a few short years we will be out of debt and can start fresh.  We can have all of our money be our own once we’re out of debt.

Meanwhile, we drive a 10 year old minivan with over 125,000 miles on it.  I wear my small diamond ring, which I don’t ever plan to replace with a bigger version.  We rent an apartment instead of owning a home.

No one is pressuring me to spend money that we don’t have.  No one is passing judgment on us (at least not to us directly).  But it’s hard not to look at other people’s lives and see the “stuff” that they have.  The nice cars.  The nice home with brand new furniture and a manicured lawn.

Me, I’ll keep resisting the peer pressure, even though now it’s mostly pressure I put on myself.