Melissa works as a freelance writer and virtual assistant from home while raising and homeschooling her three children, ages 15, 10, and 9. She blogs at Mom's Plans and writes about money saving tips, family, homeschooling, and cooking. 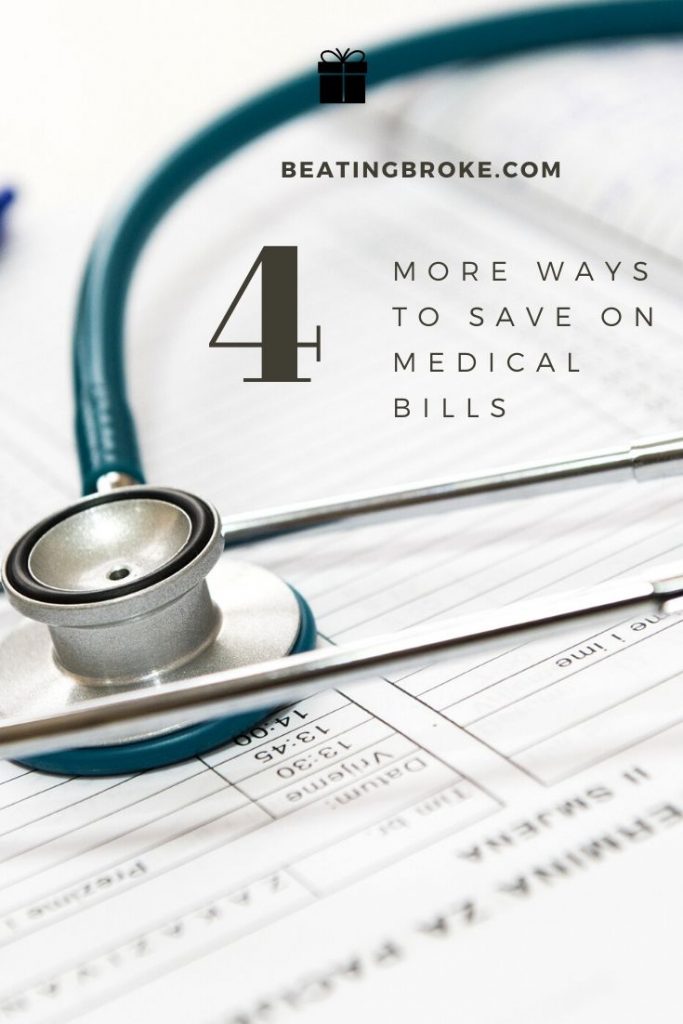 Offer to Pay Cash for a Discount

If your large medical expense is not the result of an emergency that requires immediate attention, you may be able to offer to pay cash for the procedure in exchange for a discount.

When a woman is planning to have a baby at a certain hospital or birthing center, she can often negotiate for this type of discount, for instance.  By paying cash, she saves the hospital the trouble of going back and forth with insurance.  Therefore, the hospital may gladly give a discount.

Negotiate with the Provider

Create a Payment Plan with the Provider

Hospitals and other medical providers may offer you a similar type of payment plan.  Many will provide these payment plans free of interest, while others do charge some interest.  Make sure to get your payment plan in writing.  If your financial situation changes, contact the medical provider so the arrangement can remain in good faith.

One of our children was diagnosed with high functioning autism a year ago.  We have literally paid thousands of dollars out of pocket for services.  However, even after spending that much money and seriously straining our budget, there were services like occupational and speech therapy that we could not afford.  A friend told us about an organization that helps families like ours.  We went through a lengthy application process and were approved.  Now our child is receiving speech and occupational therapy at no charge to us.

Similarly, a family friend’s husband had a catastrophic stroke from which he’ll never recover.  She found an organization that will help her pay for her husband’s long-term care.  This is something she desperately needed because her husband will be institutionalized for the rest of his life.

High medical bills can be overwhelming.  However, there are 4 more ways to save on medical bills that you can use to get the help you need and to reduce the amount that you need to pay.

Have you faced high medical bills?  If so, what strategies did you use to remain financially solvent while paying your medical bill obligations?

Going into debt is a bit like gaining weight.  It’s much easier to go into debt than to get out.  But, when you’ve finally decided you want to break the debt cycle and live debt free, it takes a lot of time and effort, much more effort than it took to go into debt.  Likewise, when you decide you want to be fit and healthy, you have to work much harder than you did to gain weight.  With either situation, when you decide you want to make a healthier change, you want it to happen.right.now!  That’s why so many people who want to be debt free decide to save only a $1,000 emergency fund and put the rest of their money on debt.  We’ve tried that before, but there are several reasons why we’ve decided not to throw extra money at our debt now.

Get Off the Debt Repayment Roller Coaster

With COVID-19, we’re living in unstable times.  But honestly, even before the virus, a $1,000 emergency fund was never enough.  My husband and I have been in debt most of our lives.

When we were first married, we had student loan debt, car loan debt, and credit card debt from our time in college.  We followed financial gurus who said have a $1,000 emergency fund and put the rest of the money on debt.

Some months, we had phenomenal success and paid down a significant amount of our debt.  But other months, because we were living so close to the edge with only a $1,000 emergency fund, we’d have the unexpected happen such as a $2,500 car repair.  Our emergency fund would be wiped out, plus we’d go back into debt to finish paying for the unexpected.

Going back into debt a few thousand dollars when we were trying to pay down debt was depressing.  Plus, we’d have to pause our debt repayment and start back over to rebuild the emergency fund.

We paid off the credit cards eventually, but a few years ago, we went back into credit card debt when three things happened one summer—our HVAC system died, our house had mold and had to be remediated, and our child had a medical issue that wasn’t completely covered by insurance.

Since then, we’ve been working to build a more substantial emergency fund AND pay down debt.  No more debt repayment roller coaster for me.  This time I vowed when we paid down our debt, it would stay gone.  But for that to happen, we needed a bigger emergency fund.

The Economy Is Too Uncertain

Now that COVID-19 has hit, we’re not paying any extra on our debt.  We’re funneling all of our extra money to our emergency fund with the goal of hitting a 6-month emergency fund.

No one knows for sure what the economic impact of this virus will be.  I want to make sure my family has enough cushion to survive.  That means creating an ample emergency fund.

We’ve been lucky that my husband hasn’t lost his job.  He’s in the higher education field, which is being hit especially hard by this pandemic.  He has to furlough for 39 days this upcoming year, which means we will essentially be losing two months of pay in the next 12 months.  However, we’re grateful that he still has a job.

But what will happen next year?

There is a very real possibility his job could be in jeopardy next year, depending on how badly this year goes.  We want to be prepared.  Sure, it would be nice if we could get our debt load down, but right now, we’re just focusing on piling cash in the bank.  We want an ample security net.

Much of the country is in the same predicament.  If you work for or own a small business, how long can the business hold out?  We’re already seeing some small businesses closing permanently, which means all of those employees will be looking for jobs.

I don’t want to advocate irresponsibility, but if you’ve lost your job and aren’t able to get a new one, you can always negotiate with your creditors or worst-case scenario, not pay your bills.  However, if you don’t have money in the bank, you’re left without resources.  Having a savings account in this situation always comes first.

If you pause paying down your debt and only pay your minimum payments due, you can always change your plan later and pay more on your debts in a few months.  That’s one of the major reasons why we’ve decided not to throw extra money at our debt now.

We’re going to save, and save, and save.  If we, as a country, as a world, ride out this virus and it is no longer a threat, things can change.  Let’s say my husband and I do save a six-month emergency fund.  If, in another year or two, his job is stable, and the world is back to normal, we can change gears.  Maybe we take three months’ worth of our emergency fund and throw it on our debt to pay it off.  We can do that.

Though you may want to be debt free or carry a lower debt load, there are several good reasons to pause that goal.  The main reason why we’ve decided not to throw extra money at our debt now is because having money in the bank is priceless, especially in the age of a pandemic.

We can later decide to take some of that large emergency fund and put the money on our debt.  However, if we pay down our debt and stay with a $1,000 emergency fund, we’re extremely vulnerable financially to what may happen in the upcoming months.  We intend to protect ourselves as well as we can from economic instability by saving as much as we can.  There will be time later to aggressively pay down debt.  We don’t believe now is that time.

If you’re looking to refinance your home, you will likely need to have an appraisal as it’s the first step to putting an official price value on your home.  You may not know where to start, but learning how to make a refinance appraisal checklist is the perfect place.  Once you do this, you can work on improving your property for the appraisal.

How to Make a Refinance Appraisal Checklist

My husband and I recently called our real estate agent because we wanted to refinance our house.  She gave us several pieces of advice to prepare for an appraisal.

Get Rid of the Clutter

Most Americans have at least some clutter.  Your job is to get rid of the clutter in preparation for the appraisal, much the same way you would if you were preparing your home for sale.  Our real estate agent specifically said, “Make your house show ready.”  However, she also added that in general we didn’t have to make places like closets pristine for an appraisal.

Since you’ve lived in your home, what improvements have you made?  Make sure you have a list of what you’ve done and when you did it.  Since we moved in, we’ve replaced the water heater, the HVAC, and two bedrooms’ flooring.  Big ticket items like replacing the HVAC system help the appraiser increase the value of your home.

When you’re in your house every day, you tend not to notice the little things like the paint that is chipped off your kitchen cabinets or the hole in the dry wall where your child’s bedroom door handle hit the wall.  You might not notice dingy floorboards or dusty door hinges, but the appraiser will.

These items don’t cost much to fix, but they can increase the value of your home by creating the appearance that you care for your home and that it is well-maintained.

Look at the Curb Appeal

How does your house look on the outside?  Is the paint fresh or the siding clean?  Is the lawn mowed?  Nicely landscaped?  Or, do you have piles of clutter outside?

A tree fell in our backyard during a windstorm, and while we had taken care of most of it, the trunk of it still lay across our backyard.  The real estate agent was adamant that we must take care of that before the appraiser came.

Get Comps for the Neighborhood

Our real estate agent offered to put together a list of comps for us.  However, we didn’t need her to.  When we put in our application for refinance, the comps in our area were high enough and our mortgage low enough, that the bank didn’t even require an appraisal.

Now is a good time to consider a refinance based on the market.  If you’re wondering how to get started, hopefully this helps you learn how to make a refinance appraisal checklist.