When we decided that it was time for a new house, (read this post for the reasoning) we knew that we had to be smarter about it than we had been when we bought our first house.  We weren’t going to just jump into it and make a rash decision that might cost us down the road.  What we discovered when we started really talking about it was that we had a slightly different idea of what we wanted in a new house.

One of the biggest reasons that my wife wants a new house was because she feels (rightly) that our current house is too small for our growing family.  Between the two kids and the big dog, we just don’t have room for all the stuff.  Yes, stuff is just that.  Stuff.  It can be gotten rid of, but it seems to just re-accumulate.  There are certain luxuries that we allow ourselves, that some people would just call stuff.  Will it cost us money to keep those luxuries?  You bet.  Are we willing to pay that price?  You bet.  While I’m sure there are some who can live on $7,000 a year, and do so enjoyably, I’ve come to the conclusion that I’m not one of them.  Call it what you will, but I like my stuff. 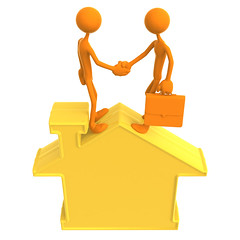 But, I also like my space.  So, for me, one of the biggest things I want in a new house is a sizable yard.  It doesn’t have to be huge, but a small postage stamp yard isn’t going to cut it.  We’ve got a dog, and he needs room to run, too!  Yes, there are parks in town.  Yes, we could go to them and run and play there.  But, it’s easier to just do that in my own back yard.  I imagine that part of that is from my experiences growing up where we always had some land to play on.

We’ve got other requirements, as well.  The kitchen has to be comfortably large.  It doesn’t need to be one of those huge kitchens you see on the home remodeling shows, but it needs to be large enough that two people can pass each other without one of them having to practically stand on the stove to do so.  It was a mistake we made in buying the house we have now that the kitchen was just too small and makes any combined activities pretty much a n0-go.   Also, as our family grows, we’d like to have more than one bathroom.  It wasn’t so bad when both kids were in diapers and could go wherever they were, but now that they’re both out of diapers, it makes it very difficult to get everybody ready and out the door in the mornings.  Impossible?  No.  But damned difficult.

So, with a few requirements in mind, we set about looking for a new house.  Luckily, most of the realtors in the area are pretty good about taking enough pictures to really help you get a good idea of what the house looks like before you go and see it, and we’ve been able to weed some of the less than desirable ones out before we wasted our time to see them.

We quickly weeded through the available houses, and came up with only two that were even close.  The one was a bit older house, but had the land.  It’s failing was that, despite being bigger than the house we are in, it was configured all strangely, and all the extra room was in all the wrong places.  The second house is on the edge of town.  This was a bit worrisome to my wife because the town isn’t known for it’s excellence in snow removal, and there’s a chance that, being on the edge of town, it might get even less attention than the rest of town gets.  It does have a large yard (2+ acres), and has plenty of room inside.  We found ourselves slightly excited by our first visit.  Enough so, that we went for a second visit.  And then made an offer.

The owners countered our offer, and we took their counter, so now, we’re in the process of getting all the ducks in a row and buying a house.  We will need to sell the house we are currently in, to use the funds from the sale for a larger down payment.  God willing, we might be able to close on the house and be moved in before Christmas.