I think it’s normal, during hard times, to consider what might happen should the worst happen.  A recent post by Crystal, asking “Will You See the Collapse of America“, brought the question to the forefront for me.  Is the American Economy on the Brink of Collapse?  Will we see the collapse of America?

First, the optimist in me immediately says no.  There are too many good things going on in our country for it to collapse completely.  The stock market just came off of a really good year.  The job market is, if not rising, holding somewhat steady and certainly isn’t gushing jobs like it was in 2008-2009.  And, up here in North Dakota, we’re working on providing lots and lots of oil.  We just need a little bit more refining capacity to do even better.

But, those aren’t the only indicators.  Crystal points to the slow degradation of our rights, and our ever increasing consumerism as reasons that America might collapse in 100-200 years.  While the loss of rights is something that we have to do something about, our consumerism had shown signs of slowing down.  With the crash of the housing market, the average saving rate had been rising.  From a low in 2005 of 1.5%, to a rate of 5.4% in 2008.  Since then, it’s begun to slowly work it’s way lower, but is still close to 4%.  At the same time, the average consumer debt held has continued to decline.  Maybe, just maybe, we’re making a difference and a better educated population is starting to make the changes that are necessary to be more financially stable.  Now, if only we could convince the government to do the same.

And, really, when we start talking about the American economy, it’s going to be the government that makes it or breaks it.  After all, you and I can save 100% of our income, but it won’t do a bit of good against a $17 Trillion dollar (and growing) debt.  The truth is, with debt that increases by several Billion each day, the rate of personal savings won’t do a bit of good.  At some point, the countries of the world that use the Dollar as a basis for trade will cease to do so.  The continual weakening of the dollar against the other world currencies (even BitCoin), makes for a potentially disastrous recipe.  It’s very possible that, if spending (and that debt) don’t come down, that the American economy could find itself between a rock and a hard place very soon.  And that could spell a major recession or depression.  How the government reacts to such a thing could be the only indicator of whether the economy ever comes back out of it, and, ultimately, whether the America we know and love continues to exist.

Like Crystal, I think the eventual collapse of the economy is unavoidable.  The government hasn’t made any meaningful steps to reduce debt or spending.  And the majority of the population either don’t see it, or believe that the people that we are electing are going to save us.  Frankly, without a major overhaul of the government, and some changes to who we elect, it may be too late.  Really, it just comes down to how quickly the collapse will come.

Crystal thinks it’s 100-200 years from now.  She may be right as far as the collapse of America.  The country itself might last that long.  The Roman empire lasted for many years before finally collapsing completely, but the signs were there for a very long time.  If I’m being optimistic, I think we might have 4 or 5 years before we see any major collapse of the economy.  But, we’ll start seeing signs even sooner than that. 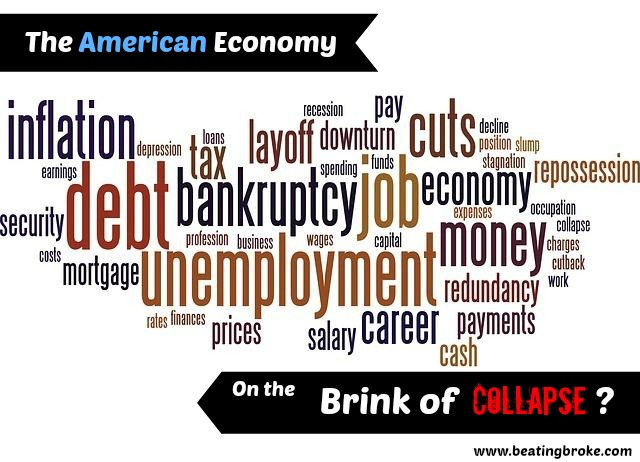 Signs of the Collapse

What signs, you ask?  There are some broad indicators, like the overall housing market and the stock market.  The rate of inflation as well.  But, unless you’re heavily invested in the stock market, that indicator might not make much difference to you.  Watch for more simple indicators.  The price of gas.  The cost of a gallon of milk.  The cost of produce.  When you combine all the simple indicators that you notice every day with the overall indicators, you should be able to make a pretty good guess which direction the economy is heading.

Let’s say that I’m right.  In 4-5 years, the American economy collapses.  Maybe it’ll be gradual, or maybe it’ll be a crash for the ages.  Either way, what can you and I do about it?  On the grander scale, not much.  We’re not going to stop the collapse by ourselves.  But, we can push it further off, and we can prepare.

I’m already taking some steps to delay the collapse of the economy.  How?  By talking about it.  By making people aware of how to best handle their money.  You are too!  By being a good steward of your money, and telling your money how to work for you instead of your money telling you what to do, you’re making your own contribution to the betterment of the overall economy.  We can get involved in politics (I know that sounds like a lot of fun… or not.)  and push our representatives to work harder to reduce debt, reduce deficit spending, and to get it done without any partisan politics.  Just don’t hold your breath that it will happen.  We can also help by not only helping our own finances out, but by also helping our friends and family get their financial houses in order.  It’s a touchy subject, but, ask yourself this; how many of your friends and family do you want knocking on your door when the economy collapses?

Preparing for the Collapse

Even with all that work, the collapse might (probably will) still come. Surviving it will depend wholly on your preparation for it.  I’m not saying you have to go out today and become a prepper.  What I am saying, though, is that you need to start taking steps to be ready.  Start learning how to be more self-reliant.  Learn how to grow some of your own food.  Then learn how to can it and preserve it.  Yes, that might mean creating a little bit of a stockpile like a prepper, but I happen to think we could all do with a bit more sustainability in our lives.

Most of all, have a plan.  What happens in an emergency?  Even if it isn’t caused by the economic collapse of America?  If you were without power for days, how would you keep warm?  How would you eat?  What would you do for a bathroom?  These questions don’t require anything more than a little thought, and maybe some research on solutions!  Have a plan.

What do you think?  Is the American economy on the brink of collapse?