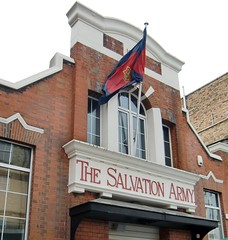 Often times, when a person is picking a charity to donate to or volunteer for, they look at only a few things.  What the charity does, and where it does it.  If they like pets, maybe they volunteer or donate to the ASPCA.  Or, if they want to keep their efforts a little closer to home, they volunteer or donate to their local Humane Society or shelter.  One of the things that they very infrequently look at is how much of the money they donate is really going to the cause.

Main Street had a nice list a few days back about the charities with the highest administrative costs.  Top of the list is a charity by the name of the American Tract Society.  68% of the donations that they receive go towards paying administrative costs.  Or, 32% goes towards the actual charitable work that they do.  To create their list, they used a tool called the Charity Navigator.  They compile the actual numbers via the IRS filings and put together a sort of watch dog group for charity costs.

One of the things that I noticed is that many of the charities on Main Streets list are smaller charities, which could account for some of the costs.  A smaller charity doesn’t gather the bigger donations from as wide of a base as some of the larger charities and so has a higher administrative cost percentage.  Even so, the next time you decide to give to a charity, it might bear taking a look at the tool at Charity Navigator and see if that charity is a “bad” charity.

There’s been a bit of publicity lately about The Giving Pledge, an organization started/inspired by Warren Buffett and Bill Gates that is aimed at the Forbes wealthiest 400 people.  They and the organization encourage the worlds wealthy to give it all away.  Or at least a majority of their wealth.

Reading about all of this brings up the questions.  Could you give it all away?  Would you?  Should you?

At the real bottom of this is a more important question.  Why do we build wealth?  What purpose do we give our lives that we strive to attain wealth.  In Warren Buffetts case, I think you could argue that he has always seen it as a challenge.  Bill Gates saw a technological breakthrough and found a way to improve upon it.  Again, a challenge.  The challenge is not usually about the money though.  Buffett saw the building of the businesses as the challenge.  He wanted to be a better investor than anyone else.  Mission accomplished, I’d say.  Gates’ passion was in geekery.  He wanted to build a better computer.  Also, mission accomplished.

Gates and Buffetts passions made them very rich.  And, since you can’t take it with you, it’s gotta go somewhere.  Both have chosen to give a majority of their wealth away.  Kudos to them.  But, would you?  Could you?

For me, I would like to think that I could and would give most of it away.  Since I don’t have any to speak of, it’s easy to say that.  Ask me again when I’m 50 ish. 😉  Many Christians would say that it’s the right thing to do.  Non-Christians will have a different reason.  Some would say that we have a moral obligation to make someone elses life better and to share the wealth.  Whatever the reason, I think it really comes down to doing good.  Most people are good by nature.  And doing good for others is in our nature.  That doesn’t mean that we all want to be paupers who volunteer all their time, but most of us are happy to share some of our spoils with those less fortunate.

What about you?  Would you give it away?  Why?