There’s been a lot of talk about the recent legislation that affects the interchange rate, and how that will affect the fees and rewards that we currently get from banks.  So, I thought it would be fun to take a look at how banks and credit unions make their money.  What exactly is it that gives them the revenue to pay the bills. It’s one word.  One that many of you who are investors will recognize.  Margin.

Specifically, rate margin.  A quick definition for those that aren’t up on their financial jargon.  Margin is the difference between two things.  The space (difference) between the print on the newspaper and the edge of the page?  Margin (or gutter depending on your profession).  So, when I talk about rate margin, I mean the difference in rates. Clear as mud?  Ok, some more detail then. 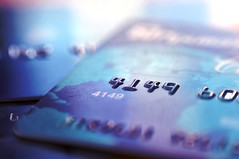 In order to lend money out to consumers, a financial institution must first have money.  They get that money by taking in deposits and by borrowing money from other institutions.  In most cases, they have to pay some sort of interest to either the depositor or the other institution.  They then take that capital, and lend it out to consumers at a higher rate.  The difference is their margin.  Let’s look at an easy example.  A bank has a simple savings account that is paying 0.25%.  They have 1,000,000 in deposits at that rate.  They then lend that money out to consumers at an average rate of 5.25%.  They have a margin of 5%.  They’ll pay $2500 in interest to the depositors and receive $52,500 in interest from the borrowers for a revenue of 50,000.

Obviously, that’s a small example.  Many banks and credit unions operate at a much higher level.  Wells Fargo, for instance, had $93,240,000,000 in gross revenue in 2010.  Not all of that is from lending interest, but a majority of it likely is.

In truth, the revenue from interchange rates is rather small as a percentage of overall revenue.  And changing it directly isn’t going to bankrupt any of the institutions.  However, there is some truth in the claims that it will likely mean the end of the rewards and cash back cards as well as some of the other perks like free checking.  Many of the institutions use that interchange revenue to pay for the rewards and cash back and to cover some of the costs of other perks.  Reducing the interchange amount means that the institution will have to drain money from other revenue streams to continue the programs, or shut those programs down.

This is where banks and credit unions will become differentiated over the next years.  Banks operate as for profit entities.  They have shareholders and owners who they must perform for and who expect them to make and increase profits each year.  They’ll be much more hesitant to drain from other sources to pay for those programs.  Credit Unions, on the other hand, are a not-for-profit entity.  They aren’t designed to make a profit.  While some may cut back on those programs, many will simply continue them.  Because they don’t have shareholders and owners that are demanding profit, they can cater to the owners of the Credit Unions, their members.

What it also may mean, is that we will have to be extra vigilant in watching our accounts for missing rewards, and for extra fees.  If pressure to keep the programs is significant enough, some of the institutions might reduce savings rates further, or increase loan rates to try and increase their margin and help pay for the continuing programs.