Every few years or so the discussion in my house comes back around to how we’ve seemingly outgrown our house.  It’s about 12oo square feet, and there are currently 2 adults and 2 children living in it.  It can get cramped.  Sometimes more than others.   But, I try to remind myself that the people we bought the house from somehow managed to raise 4 children in the home.  How?  I have no idea.

We have a bunch of “stuff”

I think that one of the major differences between the couple that lived here before us raised their children in a different age.  It was an age of far less consumerist tendencies.  And, even with our increased awareness of consumerism, we still seem to accumulate stuff regularly.  I’d be lying if I didn’t say that I contribute almost as much to the problem as anyone else.  I’m frugal to a fault, but there are plenty of things that I accumulate that fit within those frugal means.  Books would be the primary culprit.  I’ve been better lately, buying books for my kindle more often, but I still have quite a bit of books that are hanging out on shelves.

Aside from the books, we’ve also got an entire shelf full of DVD movies.  We probably only watch about 4-5 of them with any sort of regularity.  And they’re all kids movies.  I can’t tell you the last time any of the adults here watched any of the adult DVDs.  It’s hard enough for us to find our time to watch The Walking Dead.

There’s so much other “stuff” that we just don’t need.  Every so often, we go through and clean a bunch of stuff out, and minimize a whole bunch of “stuff” out of our lives.  And, slowly, it all creeps right back in.  Either through gifts, or through replacement with other new things, it eventually grows to the same size.  I suppose it’s because it’s not really a “necessity” that we keep the minimalism up.

It’s nice to have a certain level of creature comforts around.  Things that we simply don’t need, but that we use once in a while.

[Tweet “Have nothing in your house that you do not know to be useful, or believe to be beautiful. – William Morris”] 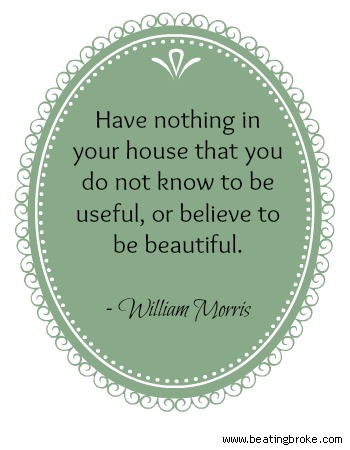 How wonderful would that be?  Nothing that isn’t specifically useful, or that you don’t think is beautiful.  Of course, that means you’d have to find out how you define useful.  Beautiful is easy to define, even though it’s definition is a little different from person to person.  Useful, though?  That’s a different story.  At it’s simplest, you can probably define useful as something that you use daily.  Or maybe it’s something that you use weekly.  Or monthly?  Well, maybe it’s not so easy…

What You Want Balanced By What You Need

If you’re reading this article, you’ve likely read other articles.  And if you’ve read other articles, you’ve likely also read a few about people who live in incredibly small spaces.  Those are people who’ve really, really managed to discover just how much they really need.  The rest of us likely are living with so much “stuff” we don’t really need.  And, if we’re living with so much “stuff” that we don’t need, maybe it’s just the natural path of things.

And frankly, work and commitment are something that most of us aren’t willing to give to our “stuff”.  We’ve got better places to put our time and efforts.  But, we can take small steps.

What steps do you take to make your “stuff” more minimal?