We spend a lot of time, while talking about finances, talking about the Joneses. We often talk about how most of us make the mistake of trying to keep up with the Joneses by buying cars that are new, houses that are bigger, and generally spending our way into oblivion.  What we seldom talk about is what really is motivating us to keep up with them.

The Joneses and Acceptance

The reasoning that most people assume is really being put to work is that of acceptance.  And, surely, it does play a part.  Humans are, at our most basic, a tribal animal.  We’ve long been conditioned to be that way.  Historically, we lived in tribes, and what was good for the tribe was also good for the individual.  If any individual of the tribe stepped out of the accepted norms, it was likely to get that individual killed, or other members of the tribe killed.

In more modern times, we talk about it taking a village to raise a child.  We talk about how we’re all “in this together.”  We, as children, are thrown into sub-tribes (classes in school) where we quickly learn that it’s easier to get along with the majority of the other children and not be one of the children that’s ostracized for being a bit “weird.”  As we get older, that need for acceptance grows.  We get to college, and the further splitting of our peers into sub-tribes begins.  Graduates from college quickly find that their college tribe has broken up, and they must find a new tribe.  We begin in the place we spend the most time; at work.  In true tribal fashion, we quickly begin attempting to appease those with the most power in order to gain favor, and thus, not be cast out from the tribe.  We call it getting fired.

And, in trying to appease those with the most power (perceived, real, or otherwise), we learn to buy cars that are similar to theirs.  We learn to buy houses that are as big as theirs.  We learn to eat at the same restaurants, drink the same drinks, and hang out in the same social circles.  All because we have a deep rooted desire to be accepted in our “tribe.”  And because we know that humans have a natural attraction to people who are most like us.  We accept them.

The Joneses and Jealousy

The issue of tribal acceptance is almost a genetic issue.  It’s been conditioned into the human psyche for centuries.  But, there’s another, equally powerful reason that we all try and keep up with the Joneses.  Jealousy. 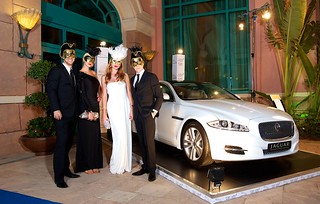 It’s a story we’ve seen played out in the news many times.  Some guy (or girl) climbs the corporate ladder and finds him or herself at the top (or near it).  Years later, they have some event that brings them down.  Corruption, greed, or some other malfeasance.  On their way down, we start hearing stories about how all those years they were at the top, they were taking the ideas of those below them and claiming them for their own. Their friends got all the promotions. People who disagreed with them would suddenly find themselves the subject of an internal inquiry and then were summarily fired.  In short, they held the power.  They dismissed their enemies from the tribe.  And, while they eventually fell from power, they wielded it to their advantage for a long time.

Few among us haven’t tasted the desire to have that power.  Whether we intend to use it in a bad manner or not, we’ve felt it.  That desire to have the power.  That jealousy of those that do have it.  And, through our jealousy (and need for acceptance), we learn to buy cars that are similar to the car that those that do have the power have.  And we learn to buy homes that are as big as theirs.  And we learn to eat at the same restaurants, drink the same drinks, and hang out in the same social circles as they do.  All because, you guessed it, we have a deep rooted desire to be accepted in our “tribe.” And what better way to guarantee our acceptance than to be the one who does the deciding?

Whether it’s through a desire for acceptance, or jealousy of their power, we try to be the Joneses.  We try to be the ones with power.  I’ve felt it.  I’ve done it.  Sometimes I managed to accomplish it too.  Maybe not financially, but socially.  Heck, I’ve still got some of the debt to prove it.  And, I’d bet that there are plenty of you who do too.

The only real cure, as many of my fellow personal finance bloggers will attest, is to give up chasing the Joneses.  To stop trying to gain their acceptance, and to let the jealousy go.  But, something that deeply ingrained into our human nature isn’t easy to do.  I’ve gone through times where I’ve done really well with not caring what the Joneses are doing.  And the next thing I know, I walk around the corner, and there’s one of them.  And it comes flooding back in a momentary flash of natural instinct.  Before I know it, I’m looking at big fancy houses that I don’t need, eating at restaurants all the time, and buying gadgets like crazy.  And then my senses return, I realize what I’m doing, and the remorse comes.  Remorse for forgetting that I don’t need that big fancy house.  Remorse at the money I’ve squandered.  And remorse at the lack of will power I displayed.  In times like that, I try to remember that it’s only natural to feel those pangs of jealousy and the need for acceptance.  And I try again.

Giving up the Joneses isn’t an easy thing to do.  In fact, it’s nearly impossible to do.  What you’ve got to do is to replace them instead.  Get a different tribe.  That ladder climbing, socialite-ing, money spending tribe isn’t the only one out there!  Just like our ancestors, the modern human race is divided into many tribes.  Find one you want to be in.  Find one whose leaders are living the life you really want to be living, and gain your acceptance there.  Surround yourself with people who have the same passions as you do, and make them your tribe.