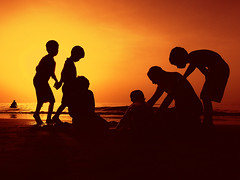 Every few weeks, you see an article that goes into great detail on the costs of having children.  In these articles, they talk about how much it costs to have a child at the hospital, to buy diapers, formula, clothes, and even talk about future costs like sports, cars, and college.  But, if there’s one thing that being a father has taught me, it’s to stop adding up the cost of children.  Seriously.  Here’s why.

If you are one of those people who truly wants to have children, it won’t matter what they cost.  You’ll want them.  And, you’ll gladly find a way to pay the cost.  Sure, it might be nice to know some rough estimates so that you can prepare a little.  That’s mostly sane.  But, some people are actually using those cost estimates as a justification for not having children.  They go on to claim that it’s just not the responsible thing to do (having children) if you can’t afford them.  But, here’s the thing.  Almost every single one of them can afford children.  It will mean changing their lifestyle, sure, but they will be able to afford a child.  The folks who truly cannot afford children, aren’t off in the corner with calculators, running the numbers.  It won’t ever occur to them that they can’t afford children.  They’ll do just what you should do, if you want children.  Have them.

No doubt, it’s scary.  The numbers run from the low 5 digits to the low 7 digits over a childs lifetime.  And, don’t even begin to total up the added “cost” of the time spent at t-ball games, birthday parties, and other childrens events. (Shhh! Don’t tell anyone, but most of those are really good excuses to have a bit of fun yourself.) And it’s absolute torture to try and figure out and estimate what college will cost in 18 years.  But, that’s the root of my advice to you.  Just don’t.  Don’t add up the costs.  The truth of it is that it just doesn’t matter.

Children are an incredible blessing.  The experience is invaluable and without a price tag.  It’s not for everyone.  But, if you want to have children, just do it.  You’ll be glad you did, regardless of cost.