In years past, we’ve tried futilely to grow a variety of vegetables, fruits and flowers in our designated garden areas of our yard.  Each year, some part of that has been a tremendous disappointment.  Part of the issue is the soil itself.  We have a large evergreen tree in the back yard that provides and excess of shade, an excess of protection from rainfall, and an excess of needles that lend a terrible acidity to the soil.  Between not getting enough shade, not getting enough rain and poor nutrient values in the soil, everything we plant has a terrible time trying to grow.

We’ve tried several things over the last few years.  Much more regular watering helps, obviously.  We’ve added better quality soil to try and make the soil better for growing.  We’ve even fertilized the plants. Each year, something happens to throw the wrench in the cogs.  Last year, we had a major slug infestation, and what did grow was quickly eaten by the slimy creatures.  With each year’s problems, we learn something new that we won’t repeat in future years.  Last year, we learned that, while fallen leaves do provide good insulation for plants over the winter, a abnormally wet spring makes them a wonderful breeding bed for slugs.  Maybe, after we’ve learned enough lessons, we’ll finally get a decent crop out of our garden.  Until then, we’re changing it up a bit.

This year, we’re giving a container garden a go.  We purchased several (8-10) containers of various sizes and shapes, filled them with potting soil and topsoil and purchased all the seeds we thought we might need for the year.

I started the seeds nice and early (perhaps a bit too early) and quickly encountered my failure for the year. Not only did very few of the seeds sprout, but those that did quickly died and began to mold. Nothing that I grew in that first batch of seeds is currently still with us. I bought some different seed starting supplies, and tried again. I got slightly better results, and a majority of those seeds survived. Any that still didn’t grow, I replaced with plants from a nursery.

So far, we’re only a few weeks into the growing season, but several of our containers are doing quite well.  The potato planters are growing very well, and the onions (note: all not seeds that I started.)  are doing well.  Of the things that I started as seeds, the only things that are really doing well so far are the carrots.  But, the other stuff is growing, and hopefully, will continue to.

I’d be remiss if I didn’t discuss the financial side of all of this a bit.  When you stop to consider the burden of having to buy most of the supplies this first year, it would have been far more economical to just buy the produce from the farmer’s market.  But, should we pull it off, and produce a good enough crop, we’ll continue it in future years.  Each successive year will make it a bit cheaper, as most of the containers and supplies are reusable.  This year, it’s probably creeping up to about $100 in total expenses, but next year will likely be a lot closer to the $20-$30 mark.  For $20-$30, the produce grown will be very cheap compared to what we could get it for at the farmer’s market.  Plus, it will have that little extra bit of flavor that gets added from having grown it yourself.

How do you garden?  Do you have the luxury of a large plot for a garden, or do you make do with containers?  Do you have any great tips for container gardening (or gardening in the presence of a evergreen) that you’d care to share?

My family has been increasingly consuming organic produce because we are trying to eliminate all food additives, preservatives and pesticides from our diet.  If you are trying to feed your family the recommended five servings of fruit and vegetables a day, you may be spending more than you would like on produce, regardless if you buy organic or not.  Just for my family of 5, meeting the USDA dietary recommendations means feeding us 25 servings of fruits and vegetables a day, or 175 servings a week!  Here are steps you can take now to save money this summer on fresh produce:

Grow a garden.  If you have the space, consider growing your own garden.  You will have an abundance of fresh, organic produce growing in your back yard, and food doesn’t get any fresher than that.  Eliminate the chemicals and the long transportation time that your produce often endures to get to the grocery store shelves. 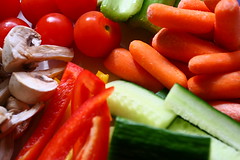 If you live in the city or don’t have room to grow a garden, consider getting a plot at a community garden.  Community gardens are designated locations that usually have 15 to 40 plots available for members of the community to garden.  You use a plot and plant what you would like.  You just have to agree to maintain your plot and water it at least once a week.  There is often a small fee.  The community garden I plan to use this summer charges $20, but that money is refunded at the end of the season if you have tended your garden throughout the season.

Subscribe to a CSA.  CSA stands for Community Supported Agriculture.  Many CSAs offer organic produce and deliver it to a location near you every week.  Programs often let you choose between a 1/2 bushel and a bushel of produce weekly or every other week and typically run for 18 to 22 weeks.

In return, you must pay for your share upfront, usually before May.  In larger cities CSAs fill up quickly, so you may want to begin looking for a CSA in your area this month or next month.  You also usually are not given much say in the produce you receive, so being open to trying new vegetables is necessary.

Freeze Your Excess.  If you have grown your own garden or have a share of a CSA, you may find yourself with an abundance of fresh produce during the summer months.  Rather than letting it go to waste, consider preserving some of it.  True, you could can some of it, but I have done that before, and it was a miserable time.  (This is just my experience; you may enjoy canning.)  Instead, take advantage of your freezer.  Shred the excess zucchini and put it in the freezer in small bags.  Puree excess squash to sneak into baked goods during the winter.  Make Jamie Oliver’s pasta sauce and freeze it for future spaghetti or pasta meals.