‘I’m not a number, I’m a free man’ so goes the classic line of the iconic 1960s BBC television series The Prisoner. Yet, in many respects that’s not true. These days you are defined – at least financially – by a number and it’s your credit score (especially if it’s a poor credit score).

This figure – barely understood by most people outside of the world of finance – can have a massive impact on your life, maybe even without you knowing what it is.

It’s important not to dismiss this as just another bit of jargon (there’s plenty of it in the world of finance after all). If you need convincing, they why not consider the issues that you might face as a result of a poor credit score?

The most obvious issue facing you if you have a poor credit score comes with your ability to be able to afford big ticket purchases. Whether it’s a house, a car, a holiday or an emergency repair – life has a bit of throwing up key purchases that cannot be paid for upfront.

We are now a nation of borrowers as a result – but our ability to borrow can be severely hampered by a bad credit score.

The ‘score’ itself refers to a calculation given by a credit scoring agency (there are three in the UK and three in the US). It’s effectively a measure of your borrowing ability and you’ll be marked down for missed payments or debts that you have been unable to pay off.

The number will determine whether a lender will give you money in the first place. They want assurance that you are likely to pay them back and this is the way in which they’ll get their assurance. It might also dictate how much you can borrow and the interest rate you will be charged.

So, put simply, a bad credit rating will mean that you can get less money, will be charged more for the privilege of borrowing that money or even that you are just turned down in the first place. That means that house, car, holiday or home repair could be an awful lot more of a problem for you.

It isn’t all about the money that you borrow, however. Your score could also impact upon your ability to earn too. Employers are able to run a credit check on the people who apply to them for a job. This check is about ensuring the candidate has a sound record and can be trusted – but you could feel like this is a crude way to do this, as you might not have chance to offer any explanation by way of context.

Does one missed loan payment five years ago or a dispute with an old mobile phone contract deserve to define you in the eyes of employers? Whether you think this is fair or not, it might well be the case.

Then, of course, there’s the emotional aspect to all of this. A bad credit score might hang over you. There are steps you can take to improve your credit rating, but this might well take time and mean that big life choices have to be put on hold for a while. Do you really want to be forced to delay moving into your first home with a partner for a few years while you sort out your credit rating?

During those years you might feel under a great deal of stress and strain and some people might well feel embarrassed about what they consider to be a ‘black mark’ against them. We might be a nation of borrowers, but we’re not a nation that is terribly good at talking about borrowing and money. Indeed, our personal finances are still seen as something of a taboo by many people and that can cause people to bottle up their concerns or bury their head in the sand when they encounter trouble.

A poor credit score can, therefore, stop you buying the things you need, harm your chances of getting a good job and impact upon your mental health. When you put it like that, the importance of a good credit score becomes pretty clear.

When I first started trying to get my finances under control, I had no idea where to start. I tried to follow a patchwork of ideas like pay yourself first and only spend X percent of your income on rent, but at the end of the month there would always be more month than money. I couldn’t figure out what I was doing wrong until someone asked where my money was going every month. Aside from food, rent, cell phone and credit card payments, I had absolutely no idea. It was such a simple question and the answer ended up keying my turn-around financially but it took me a while to realize that mattered.

So if you’re trying to turn your finances around and save a bit of money every month instead of wondering where it all went, here are the 2 best places to start fixing your finances. 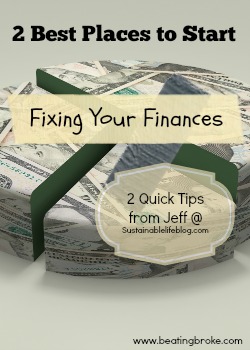 Track What You Spend

As I found out, the most important thing is tracking your finances. When I started turning my ship around, there wasnt a lot of good financial tracking software like their is now. I started with a blank sheet of paper and a stack of bills, working those and my online logins to figure out how much I was spending every month. It’s much easier now, with the online trackers for your finances such as mint and apps that are more investment focused, like personal capital. Once you start tracking your income and expenses, you’ll know where you need to cut and how much you can use to save or pay off debt each month.

Once you get your expenses written down, I’ve found it’s most valuable to lower your structural expenses as much as possible at first. This includes things like rent, car payments, car insurance, electricity, water, cell phones and cable tv. I’ve found that many people way overpay for cable TV (Calling up and getting a discount usually works wonders) and if they switch to an MNVO like ting or republic wireless they can usually lower their phone bill by 66% or more per month. For a family of 2 if they switched phones and totally ditched cable, that’s an immediate savings of 200+ per month. Once that’s done, add all that money to your savings or debt repayment. Then it’s time to move on to your car expenses. Consider selling your car and trading in for a cheaper one that you own outright, and can carry less insurance on. This will get rid of your car payment completely and hopefully lower your insurance by a significant amount as well. Better yet, try getting a bike and getting rid of your car completely.

In my opinion, those are the low hanging fruit – things you can easily change and your day to day existence wont be changed much one way or the other. The best part about this is you can spend a day or 2 over the course of a week and you should be able to easily pocket 500+ per month in savings – that’s 6,000 per year! Like you, I could use the extra 6k per year.

Once you get your structural issues fixed in your finances, it’s time to move on to your habitual purchases. Is there anything that you spend too much money on and dont get a lot of value from? Do you spend too much on fast food, or alcohol? Or maybe you buy too many books you’ll never be able to read, or too many movies on blue-ray you cant watch?

Now is the time to deal with those, and the easiest way that i’ve found is to get a budget set up and spend that in cash every month. Say you want to limit your blu-ray purchases to 25 bucks per month – get that amount in cash at the beginning of the month, then when the cash is no, no more blu-ray until your cash re-ups at the beginning of the month.

In truth, I’m writing this post as much for me as I am for you.  I need to hear that message occasionally, just as you do.  It’s nice to daydream about winning the lottery, or some sweepstakes and having some of your problems solved.  It really is.  But, if you, like me, find yourself lingering in those daydreams a little too much, too often, you need to hear those words.

You and you alone can be the savior of your finances. 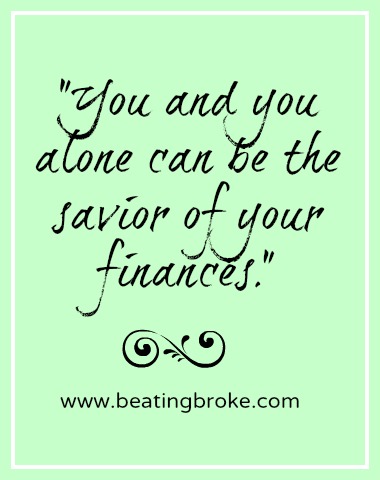 No one but you.

If you (and I) don’t do it, do you know what happens?  Nothing but the same.  Your paycheck comes in (maybe on time, maybe not), your paycheck goes out.  At the end of the month, maybe we ask “where did it all go?”.  And if we do nothing about it, we’ll never really know.  We’ll just continue the pattern; wondering why we aren’t paid more, and wondering why what we are paid never seems to be enough.

[Tweet “You and you alone can be the savior of your finances. #personalfinance #saveyourfinances”]

You can make a difference in your finances though.

Uniquely.  No one but you.

You can budget your money and tell it where it belongs.  You can know where your money is going, and control how it works for you.  If you actively manage your money, it can no longer control you.  Create a budget, track your income and spending, then take back your financial life.

What are you doing today to break old financial habits and take control of your money?