You’ll have a hard time finding someone who won’t tell you that the market performs quite admirably over time.  It may have it’s ups and downs, but it performs at a rate that touches on double digits for longer periods of time.  And, it’s hard to argue with the facts.  Take the market for any given 10 or so year period and you aren’t likely to find too many periods where it hasn’t returned a pretty nice rate.  Especially when you compare it to the rates of savings accounts and CDs over the same period.

But, there’s  shady side to all of that.  Our confidence in the ability of the stock market to return those kinds of numbers can sometimes cause us to over-invest our portfolios.  Every time the stock market drops significantly (or crashes altogether) we hear stories about the person who was near retirement and now has to work for another 10 years because he/she lost it all in the stock market drop.  Invariably, you hear one of the reporters utter something about whether the stock market is as safe as we all make it out to be. 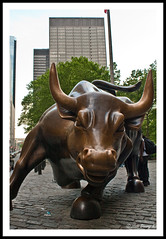 And the truth is, no.  It’s nowhere near as safe as some would make it out to be.  In fact, it’s down-right risky.  And the less diversification you have, the riskier it becomes.  Hold all your money, or a significant portion of your portfolio, in one stock and you’re just as likely to suffer a tragic loss than you are to retire rich.  Ignore the more conservative professionals who suggest that you should move more and more of your money away from stocks and into something like bonds as you age, and you have a much higher chance of suffering a tragic loss.

Our confidence isn’t entirely misplaced, however.  The facts remain that the market does return a healthy rate over time.  And as long as you can weather a few down trends, you’re likely to come out on top if you just hold on for the ride.  The overconfidence comes when you keep your money in too high of a percentage of stocks as you near retirement age.  By the time you are 10-15 years from retirement (about age 50-55) you should have moved at least 50% of your portfolio away from stocks and into bonds.  Your investment adviser should be able to help you with that, or you should sign up with a stock advisor service (like the Motley Fool Stock Advisor, or Betterment).  When you’re 5 or so years from retirement, you should be closer to 90% in bonds and other safer investments.  Yes, these investments are less likely to have high returns, but they also are almost guaranteed to return something.  And, as the old saying goes, something is better than nothing.

The bottom line is this.  Be aware of the risk of the stock market and that you should begin playing it safer as you near retirement age and you should be ok.  Don’t get overconfident in the history of the stock market and it’s giant returns.  Most importantly, find an investment adviser that you can trust and, at the very least, get their advice on your portfolio and it’s allocations, and you should find yourself hitting retirement with most of the money you expected to be there.

This post originally appeared on Beating Broke on 10/25/2010, and has been refreshed.

I’ve always been a proponent of the buy and hold method of investing.  If you’re unfamiliar with the concept, it’s basically the method of buying a stock (or bond, mutual fund, etc) and holding it forever.  Well, maybe not quite forever, but certainly for as long as you don’t need any liquidity.  For most, that’s pretty much right up until retirement.

I’ve been playing at investing for many years.  Over a decade.  To say that I’m successful would be stretching the truth just a bit.  I remain a buy and hold method advocate however.  Let me give you a couple of examples.

My investing history goes a bit further back than this example, but these are both examples from when I got a bit more serious about investing.  But, also a time when I was still very new to real investing and learning the world of investing the hard way; by trial and error.

Let’s start with what could be one of the strongest reasons why you should do your research, pick a stock, buy it, then hold on to it.

In October of  2000, I bought 3.95 shares of stock in a company you might be familiar with.  Apple Computers.  (AAPL)  For those 3.95 shares, I paid a grand total of $47.25 (including $5.98 in trading fees).  The stock had recently split, so the price was down.  As an IT professional (or at least a future one at the time), I was pretty familiar with Apple and thought well of the company.  I bought the stock with the idea that it was a company that I liked, and wasn’t likely to disappear.  That’s about the extent of the research I had done.  Back then, I invested with a company called BuyandHold (define irony, eh?)  but I mostly invest in stocks through Sharebuilder and Kapitall today.

Somewhere around April of 2001, I began thinking that I really should be buying stocks that paid a dividend if I wanted my portfolio to grow.  Note: I still believe that the majority of your portfolio should be giving you income in the form of passive income (e.g. dividends).  At the same time, the Apple stock that I had purchased not only didn’t pay any dividends, but it’s price per share really wasn’t going anywhere at all.

But, that’s not the lesson.  Here’s the real lesson.

In 2005, riding the success of the iPod, iPod Shuffle, and iPod Mini, and the iPod Nano, the stock of Apple began to rise. And then they released the iPhone in 2008.  And the iPad in 2010.  And their stock has never looked back.

The Buy and Hold Lesson:

It’s no small amount.  And a painful (to the wallet and ego) lesson.

Of course, hindsight is 20/20.  There was no way, back in 2001, that I could have possibly foreseen the successes that Apple would have nearly 5 years later.  But, if I had stuck to my buy and hold policy, and not worried about the details, I’d have a better looking portfolio now.

What about you?  What stock did you sell that you shouldn’t have?

I had the opportunity to meet Mike at the first FINCON in Chicago last year.  He’s a thoroughly nice guy.  I knew him from his blog and website, but for some reason I hadn’t known the extent of his authorship.  I found out at FINCON that he’s written several books (9 of them if I count right) on personal finance.  They mostly lean towards the topics of investing, but even encompass Social Security and business structure.  After meeting Mike, and learning about his books, I made it a point to pick one of them up to read and review.  Well, over a year later, I finally made it to the reading and reviewing part.

Since I’m not much of an investor, I thought that it would be a double good idea to pick up the Investing Made Simple title he wrote.  I can review something he’s written, while probably learning a few things along the way.  Investing made Simple is an excellent book.  It’s short, which makes it an easy read, and the writing style is light, without all the technical investing jargon that’s typical to investing books.

It’s not an in depth book on investing, but it wasn’t intended to be.  What it is intended to be is a short (100 pages or less) book that will give anyone the basics of investing while setting them on the right track to a successful investing portfolio.  I think he accomplished that.

I think one of the things that many beginning investors, including myself, get bogged down in is that the world of investing is a pretty big world.  There’s all these different ways to invest in something.  There’s shorts, longs, calls, margin, options, commodities, ETF, bonds, and the list goes on.  And on.  But, when the beginning investor, who knows little to nothing about investing goes looking for information to get them started, it’s a whole lot of overwhelming.  Piper lays it out simple and easy.  He gives you the meat of what you need to successfully invest for the long term, while quietly informing you that you’ll likely be better off ignoring most of the  stuff that’s confusing you.

What you end up with is a book with all the basics of investing in a small package.  But, you also end up with something that, for most people, is also a complete investing manual.  Keep it simple, and invest wisely is the order that I took away from reading Investing Made Simple.  I think it should be recommended reading for all beginning investors.