I’ve been going back and forth with myself over whether I should write a post about how I am withdrawing money from an IRA.  It’s not something that is recommended, and certainly not something that most people who write personal finance blogs talks about.  In fact, it’s somewhat embarrassing that I am doing it at all.  And, I had decided that I might not talk about it.  Until I saw this post on my friend Sandy’s blog, Yes, I am Cheap.  For those of you who won’t click through the link, I’ll give you the quick rundown.  One of Sandy’s readers lost her job a while back.  Since then, the reader has used all of her savings to pay bills, and her unemployment status is in a sort of limbo.  The reader has 21k in her 401(k), and she asked if she should take that money out to help pay the bills until she can find work.

What that post did for me, and the reason that I’m writing this post, is remind me that I’m not an island in the personal finance ocean.  When I started this blog, I didn’t have a 401(k), or really even know what one was.  I was up to my eyeballs in debt, and contemplating bankruptcy.  As I searched the internet for information about that and other personal finance related topics, I decided that I wanted to share what I was learning, in an effort to help others who might be in a similar situation.  Sometimes, when writing post after post, here, I forget that I’m not the only one who has the same questions, or who is in the same situation.  There are other people who’s circumstances might make them cringe when bills show up at the door.  It’s for those people that I write here and share here.  And it’s for those people that I am writing this post.  I think this may be the longest introduction to a post I’ve ever written. 🙂  Let’s get on with it, shall we? 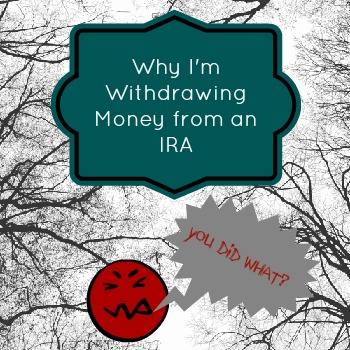 Those of you who are regular readers will recall that I quit my job in November of 2011.  It was a decision that I had been coming to  for many months, and a decision whose timetable was advanced by several situations at that job.  All of those situations made it very unhealthy for me to be there anymore.  So, I quit.  I didn’t do much planning, and hadn’t done much saving.  I had to quickly cancel the mortgage paperwork we had been trying to push through as we wouldn’t be able to afford the house we had been planning to buy.  All in all, it wasn’t the greatest idea, financially.  Emotionally and mentally, it was the best idea I’d had in a long time.

Why I needed to withdraw from an IRA

I then spent about 7 months working part time while trying to rapidly build my blogs, here and elsewhere, to a point where they might sustain my without having to get another full time job.  I didn’t succeed.  And I ran out of savings about a week and a half after I had taken a new full time job.  It’s a good job, and I enjoy it quite a bit.  But, it doesn’t pay nearly as much as my other job had.  When I started there, our finances were still bleeding.  They continued to as we continued to try and make ends meet.

Sometime last fall, it became apparent that the ends were going to begin to not meet.  If you’ve ever been there, you know that looking forward to a month where you might have to decide which bills to go delinquent on isn’t a very comfortable spot to be in.  It became very apparent, after several hours going over our budget, that we had a cash flow issue.  Too much going out, not enough going in.  The problem wasn’t with discretionary spending, however, although we did find some places to cut there too.  The problem was that we had too many payments taking up too much money.  If we wanted to survive, financially, we needed to find a cash flow solution.

I should say that it wasn’t an easy decision to tap into my IRA.  At  the time, I’d only recently rolled my 401(k) from my old job into it, so I’d just taken a hit by doing that.  But, I needed a way to create some cash flow, and an infusion of money would do it.  So, I called my adviser and had him issue a check for the amount I needed.

There will surely be a few naysayers who come upon this post.  Most of them will tell me (and you) that what I did was a terrible thing to do.  That I’ve permanently set myself back for retirement, and that there had to be other ways to accomplish the same thing.  But, there weren’t.  Trust me when I say that I know my finances.

Yes, it will set my retirement saving back by quite a bit.  Yes, I’ll have to save more in the future to achieve any sort of retirement nest egg.  I know all that.  But, I feel that remaining current on my bills, and not having to potentially declare bankruptcy is more important than that.

There’s also a rebellious part of me that would like to just say that it’s my money and I’ll do with it what I want. 😉  In all honesty, it is my money.  Just so much as the money in your IRA or 401(k) is your money.  And, in my opinion, our money is only worth anything when it is improving our situation.  My situation needed improving now, not in 40 years.  (not that it likely won’t need improving then too)

Using the withdrawal from my IRA

For those of you who are thinking to yourselves that if I made a withdrawal from my IRA, it’s ok for you to do it too, just stop.  This was a last ditch effort to stop us from going into delinquency on several accounts.  Would it have bankrupted us eventually?  Maybe.  I’ll never know, and I didn’t want to find out.  But, what I will tell you is it took a good deal of thought to make the decision, and it took a good deal of determination to use the money properly when I did get it.

When the check arrived, I cashed it and went to the casino.

Just kidding!  Ya’ll were looking so dang serious!  I deposited it.  Directly into our checking account.  During the decision process, I’d taken a full audit of our bills each month and determined the ones we would need to, and could, eliminate in order to get ourselves back on the right track.  So, even before I asked for the withdrawal from my IRA, I had a list of the things that I was going to pay off.  Over the next several weeks, as those bills came in, I send them payment in full.  Until all but one of them was completely paid off.  The one remaining was a bonus bill.  I didn’t have enough to pay it off in full, but was hoping that I could get them to negotiate the amount down.  I wasn’t able to.  So we still have that payment.  But, once it was done, we eliminated several hundred dollars worth of monthly payments.  More importantly, we cut our monthly payments by enough that we have enough each month to pay the remaining bills while still having enough left over to pay a bit extra. We’re on the right track again, and making strides to keep it that way.

Would you withdraw from your IRA?