Our Chicago winter this year has been a lot less like a Midwest winter–the snow storms have been few and far between.  A few weeks ago we finally got hammered by a storm that dumped 10 inches over the city.  At the height of the snow storm I had to pick up my son from school.  As I waited at a stop sign, the driver behind me bumped into my bumper.

Luckily, the damage wasn’t bad.  When I took it to a repair shop for an estimate, they thought it would cost between $580 and $1,200 to fix depending on if there was any damage inside the bumper when they take it off to repair it.

Surprisingly, the woman who hit me decided she wanted to pay out of pocket rather than go through insurance.  When I told her that the repair would take 2 to 3 days and we’d need a rental car during that time, she agreed to cover that cost, too.

This is the second time I’ve been rear-ended in 5 years, and both times the repairs were less than $2,000.  Both times the drivers opted to pay out of pocket.

If you’re in a minor fender bender, should you pay out of pocket rather than going through insurance?

Reasons You May Want to Pay Out Of Pocket 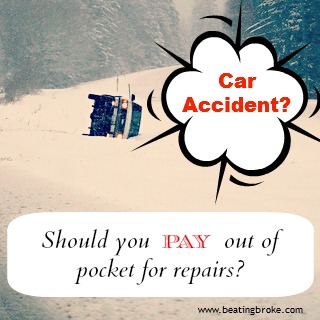 1.  If you have a high deductible.  If you have a deductible of $1,000, for example, paying out of pocket if the repair is just a few hundred dollars over that amount may make sense.  You’ll save yourself from an increasing premium.

3.  If this is your second accident.  While you’ll pay an increased premium for one accident, if you file two claims within a few years of one another, the increase is substantial.  For instance, State Farm generally charges a 10% increase in premium for the first claim, but that amount increases to 45% for the second claim.  While it may hurt your budget to come up with a thousand or two to pay out of pocket for the repairs, that may be the better option if you’re facing a substantial increase that could last several years.

4.  If your insurance doesn’t have an accident forgiveness clause.  Some insurers offer an accident forgiveness clause, meaning, if you’ve been with the company for a certain number of years (usually 5 to 9) with no accidents, the insurance company won’t increase your premium on the first accident you file.  Again, though, you may want to save this benefit for a more substantial accident that you can’t afford to pay out of pocket rather than when the repair is relatively minor.

If you cause an accident, don’t automatically file a claim.  There are benefits to paying out of pocket.  You just need to understand your insurance policy as well as know exactly how much the repairs will cost before making a decision.

If you’ve caused an accident, did you pay out of pocket rather than filing a claim?