Americans love their stuff.  We can’t get enough of the latest doodad, the latest hot new product on the market.

We love stuff so much, research has been conducted on our behavior.  According to Boston.com, a team of archealogists spent 4 years studying 32 middle class Los Angeles families for their new book, Life at Home in the Twenty-First Century.  What they found was fascinating and depressing.

According to the study, ” The rise of Costco and similar stores has prompted so much stockpiling — you never know when you’ll need 600 Dixie cups or a 50-pound bag of sugar — that three out of four garages are too full to hold cars” (Boston.com).  And it’s not just the parents.  “The study found kids’ stuff everywhere, crowding out their parents’ possessions to such an extent that even home offices and studies (more than half of the 32 households had rooms dedicated to work or schoolwork) were crammed with toys and other child-related objects” (UCLA Magazine).

All the while, many Americans are swimming in credit card debt, which may be a direct result of the need to have more and more stuff, even as the stuff leads to less life satisfaction.  In fact, stuff creates stress for many people.

If you feel the need to buy more stuff, keep these things in mind:

The More Stuff You Have, the Less Satisfaction You Have 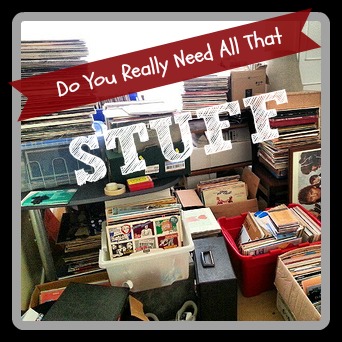 We often think that if we get the latest and greatest item, we’ll be happier or life will be easier, but that isn’t often the case.  In fact, having less stuff leads to all sort of important changes.  If you have less stuff, you can live in a smaller space.  Live in a smaller space, and you pay less for rent or your mortgage, and utilities are also less expensive.  You may need to work less to afford your lifestyle, and instead have more time to enjoy life, which brings greater happiness.

The New York Times states, ” New studies of consumption and happiness show, for instance, that people are happier when they spend money on experiences instead of material objects, when they relish what they plan to buy long before they buy it, and when they stop trying to outdo the Joneses.”

Tammy Strobel, the blogger behind Rowdy Kittens, downsized her life, and now she and her spouse live in a tiny house with minimal possessions.  Because of this lifestyle change, she was able to quit her job and support herself and her spouse when he was in school on just $24,000 a year that she made as a freelancer according to The New York Times.

Your Stuff Is Worth Nothing

Besides considering the improved life satisfaction you will have without more stuff, there is another important reason to curb your consumption of stuff.

While stuff can cost you dearly in out of pocket expense, once you have it, making any money off of it, should you choose to downsize your life, is very difficult.  Yes, you can sell your stuff on Craigslist or Ebay or have a garage sale, but in general, you only recoup 10% or less on the original purchase price.  How is that for depressing?

Just visit a garage sale in the summer and see the huge spread of stuff to be sold.  How much money does all of that stuff represent?  That is money that is just gone, never to be recouped.

If you want to improve your life and your financial situation, just stop buying stuff.   You’ll be amazed how much better you feel when you have less stuff in your life to manage.

Melissa works as a freelance writer and virtual assistant from home while raising and homeschooling her three children, ages 15, 10, and 9. She blogs at Mom's Plans and writes about money saving tips, family, homeschooling, and cooking.