Over the last few months, my husband and I have lost some income.  Not a little drop in income.  About 20 to 25% of our monthly income.  And let me tell you, we weren’t earning more than the median income for a family of five to begin with.

Our budget was already tight, so when the drop in income happened a few months ago, I’ll admit, I panicked a bit.  I felt a little bit desperate.  I’m sure those of you who’ve been in a similar situation know the feeling.

And then I took a deep breath, and told myself we’d be alright.  And we are alright.  We’re actually better than alright.

Taking Stock of the Positive

The first thing I did, after I calmed down a bit, was to look at the positive side.  We had already paid off half of our debt, so we don’t have several debts to pay monthly.  We’re only left with one student loan payment every month, so that is a relief.  (When we started our debt repayment over two years ago, we had five monthly debt repayments that totaled almost $1,000 a month.  Now, we only need to pay $315 a month.) 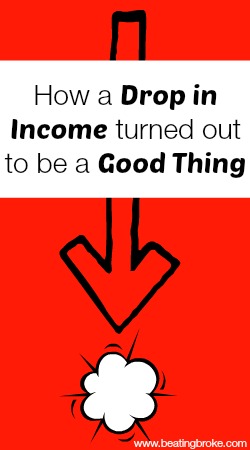 Secondly, we’re used to living on a tight budget because we’ve been doing so as we try to pay down debt.  Our income drop, though not slight, was not going to throw us into a completely different style of living that we weren’t accustomed to.  I’m used to buying my clothes second hand.  I’m used to cooking all of our meals from scratch and not going out to eat.  The only adjustment we had to make was buckling down even more.

Why Our Income Drop Turned Out to Be a Good Thing

While our budget is lean, we still had some fat there.  We subscribe to Netflix for both streaming movies and DVD home delivery.  After the income drop, I decided the home delivery at $11.99 a month could go.  I had been thinking this for awhile, but I was afraid we’d miss the service.  Guess what?  We don’t.  I can borrow most of the movies for free from the library.

In addition, I think much more carefully about purchases now.  Buying something on a whim is no longer a possibility.  I have to think carefully before making a purchase, which has made me realize I don’t need many of the things I’ve been thinking of buying.

I also took other frugal steps that I’d been to lazy to take previously.  I had always read that making your own laundry detergent can be a big money saver.  A year ago, I bought all the supplies that I needed, but I never got around to making it.  Well, I finally did a few weeks ago, and it works great.  Sometimes it takes circumstances to prod me into changes I should have made a long time ago.

Of course, we don’t want to live with such a tight budget indefinitely.  But now I know that there are many cost cutting measures I’ve implemented that aren’t difficult.  When we make more money, that just means I’ll have room for greater savings and paying off that last student loan.

Have you ever experienced a tight budget?  If so, did you find it to be a good thing as I have?