When you’re in debt, it’s easy to be hard on yourself.

You shouldn’t have let yourself go into so much debt.

You weren’t smart with your money.

You’re not paying off the debt fast enough.

On and on we berate ourselves.

It’s even easier to do this at the end of the year when you feel financial pressure to buy gifts for not only family members, but associates, hired help, etc.

In addition, if you’re anything like me, you may have set some lofty goals last January that you could not achieve.

Last January, I could see nothing but clear horizons.  I set some ambitious financial goals (for our financial situation).

Guess how many of those financial goals I accomplished?  None!

Guess how many I partially accomplished?  None! 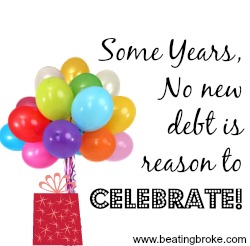 Sometimes Finances Are Just about Survival

What I could not see that fine January morning when I set my goals was that we were on the precipice of a financial cliff.

Within just a few weeks of setting the goals, we experienced a number of financial difficulties.

And that’s okay.  Some years you can’t be gazelle intense or even pay any extra on your debt because you’re too busy just surviving.

Even though the year didn’t go the way we had planned, at all, it wasn’t a complete wash financially.

The good news is that we learned more creative ways to stretch our money even further.  We’ll continue to implement those strategies this upcoming year.

The even better news is that we didn’t acquire any new debt.

Sometimes, treading water is the best you can do.  Overall, for this year, I’m happy with that.

If you’re paying off debt, did you make the progress you wanted to this year, or did you have a year like ours?