I was reading a story somewhere where a person was being interviewed about their debt.  In the interview, the person was speaking about how they had this credit card debt and how they just couldn’t get out from under it because of all the interest, fees, and other ways that the credit card company throws on the heap each month.  They went on to talk about how they were in fear of having their car and house repossessed because they were falling behind.  With each new problem, they were quick to point out the things that were keeping them back and causing their slide into bankruptcy.

Something occurred to me, then.  They were taking no ownership in their finances.  No matter what the financial woe was, it was always someone elses fault.  The credit card companies were tacking on interest and fees.  The bank was adding late charges onto their car loan and mortgages.  Not once did they take any ownership of their situation.  Not once did they say, “we shouldn’t have charged so much on the credit cards”, or “we bought more house than we could afford”. The blame was always on the other guy. 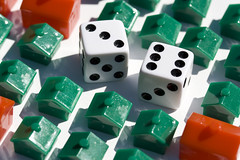 If there’s one thing I’ve learned in my journey towards beating broke, it’s that it’s all my fault.  I signed that credit slip.  I signed that mortgage.  I signed the loan papers.  Yes, some of the credit card companies have interest rates and policies that border on predatory.  Yes, the banks will allow you to borrow right up to a point where you’re living paycheck to paycheck.  But, I signed on the dotted line.  Along the way, I discovered all of that, and I took financial ownership.  And, in doing so, I took control.

My journey isn’t over, but I am beating broke.  I’m taking financial ownership and making my future one that is free from broke.

I want you be able to say the same thing.  It’s one of my goals for this site to help you beat broke.  Beating broke is the first step in your financial journey towards a life free from concerns over where next months bills are coming from.  You can do it.  But, you’ve got to take financial ownership.  You got yourself in the situation you’re in, and only you can get yourself out.  Do it today.  Accept that you are the only one that can take ownership of your financial situation, and you are the only one with the power to fix it.  Take that step.