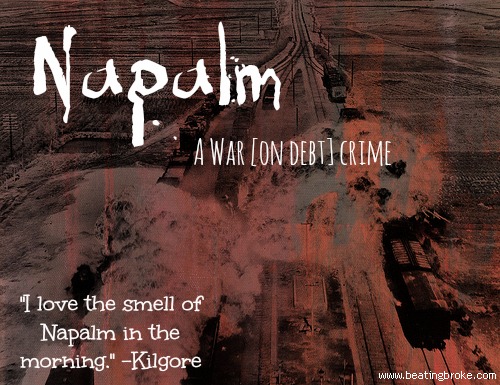 I can’t tell you the number of times that, in our seemingly never-ending struggle with debt, that I’ve seriously contemplated just giving up.  Just throwing in the towel and saying f-it.  You know it’s bad when you catch yourself fantasizing about it.  About how much easier your life would be without the struggle.  Just declaring bankruptcy, taking the hit on your credit score, and moving on with your life.

Even now, after having written about personal finance for over five years, I still find myself in that place occasionally.  We let our budgeting lapse, and inevitably our spending gets out of whack again.  Something happens, and the emergency fund just doesn’t seem to cover it all.  Or, worse, doesn’t seem to replenish itself as quickly as it should.

I can try and lay the blame somewhere.  That always helps, right?  If it isn’t my fault, then I can’t be blamed for it.  I can’t be the one that everyone points to as the failure.  I can deflect that attention to someone or something else.  That helps.  Until it doesn’t.

I failed to negotiate the raise.  I failed to have enough saved up to make that repair.  I failed to budget properly to make sure that we wouldn’t have to cut corners at the grocery store.  Me.  I did that.

With all the news lately about people “walking away” from their mortgages, increasing bankruptcies, and debt consolidation/repayment schemes, I got to thinking about what the obligations of the buyer are.  And, also, the ways that we as a society have made it easy to sidestep those obligations.

What obligations to we have to the seller when we buy something?  There are two ways to look at this.  The first scenario involves paying cash for something.  If the full purchase price that was negotiated is satisfied, I don’t believe you have any obligation to the seller.  However, if the purchase involves debt of some sort, there are obligations that arise.  If you purchase with a credit card, there is an obligation to pay that debt to the credit card company.  The same is true for a mortgage, a car, and even a pack of gum.  Not only do you have an obligation to pay the debt, but you also have another obligation to yourself to learn what that debt is going to cost you.  This last obligation is the one that was most ignored during the fiasco that we like to call a housing bubble.  Many ignored the facts of what their new houses were going to cost and bought them anyways.

In the pursuit of a consumerist society, these obligations can sometimes get in the way.  If I ignored the obligation to know the cost of debt and bought a house anyways, I likely entered into an agreement to pay a mortgage company a set amount each month.  Recently, it’s become popularized to demonize the banks that lent the money to people as the sole problem and, as a result, it’s become no big deal to merely “walk away” (default, or stop paying) on a mortgage.  The reasoning follows that it’s better to default on the mortgage than remain paying on a house that is worth less than what the purchase price was, or that has had payments adjusted higher.

In the same way, the obligation to pay credit card bills, auto loans, and most other consumer debt has been sidestepped.  It’s no longer a social stigma to declare bankruptcy.  Many, knowing they are about to file for bankruptcy, will go out and max out their credit lines in anticipation of the bankruptcy cleaning the slate.

As these sidesteps become more and more common, the social stigma will decrease even further.  If everybody is doing it, it’s hard to demonize something.  You might demonize your friend.  Or relative.

Of course, this isn’t to say that defaulting on a mortgage should never happen.  Or that bankruptcy should never be declared.  It happens.  It’s the rampant social acceptance of these situations that is troubling.  What happens when it becomes commonplace for mortgage borrowers to default?  The loans become more expensive.  The banks have to cover their costs to repossess the house, the staff to service the loan, and associated costs with trying to resell the house.  Where is that money going to come from?  They aren’t going to just pay it out of the kindness of their hearts.  They’ll pass it on to the customer.  Suddenly, mortgages will become even more front loaded with fees and interest.  When bankruptcies become more commonplace, credit availability is going to decrease.  We’ve already seen that recently.  People who could easily get a credit card before will be denied.