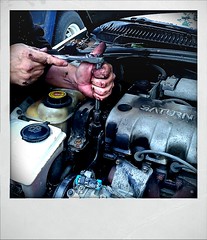 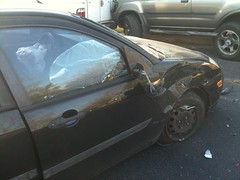 In the midst of spending 5 straight days remodeling our kitchen, our good friend Murphy’s Law decided to show up.  My father came over for the long weekend and helped.  Without him, the remodel would have probably been a disaster.  But, that’s not where Murphy comes into play.  One evening, after we had supper, we made our way to a local park so that the kids could run around and get worn out a bit.

As we were walking back to our car, we noticed a pretty good sized pool of liquid under the car.  Sure enough, it was oil.  It doesn’t take a mechanic to know that a pool of oil under your car is not a good thing.  Not even a little bit.  I got the car home, and parked it until Monday, when I could call the mechanic and have them take a look at it.

Luckily, when they called back with their diagnosis, it wasn’t a hugely serious problem.  A minor seal had broken and needed replacing.  The seal  itself is a $16 part.  The labor to replace it is a bit more.  We had been envisioning a bill in the $1000 range, but instead, got a bill in the $150 range.  Even so, that’s a pretty big unexpected expense for us.  A budget buster on most months.  Luckily again, we have our Murphy thwarting emergency fund and our remaining tax refund, so either case would have been handle-able.

Unfortunately, the extra expense will likely have to come from the remaining tax refund.  It’s good that we still had the money hanging around, but using it for the car repair will mean that we have to wait a few months for the new couch that we had planned on getting.  We do have a fancy new remodeled kitchen though!

Once again, we’ve been reminded how the stress of a Murphy’s Law moment is lessened by having an emergency fund set up.  If the repair on the car had been more expensive, or we had needed a new engine (or a new car), we would have had that $1000 sitting there to help with the costs.  It wouldn’t have covered the whole thing, but would have made a serious dent in the repairs.  Get yourself an emergency fund!  It will pay for itself in peace of mind.