If you have tens of thousands of dollars to pay off, gazelle intensity can be exhausting. You can easily begin to feel sorry for yourself and lament all of the things you have to give up and sacrifice when paying down debt.

We started our journey to be debt free on October 20, 2011. Our debt was a mind-numbing $57,966.01. In the 7 months since then, we have paid down almost $10,000. (We are sitting right around $48,000 now.) I am proud of our progress, but we have reached the point where the journey is getting long and difficult. Gazelle intensity has lost its luster.

While we have no intentions of adding any new debt, we sometimes want to slow down and enjoy life. I don’t want to work so hard all the time; I want to spend money on treats sometimes.

And just like that it happened. The lifestyle creep began. We had been not been spending any money on eating out, and in May we spent nearly $200. Yes, I don’t think that seems like gazelle intensity either.

My kick in the pants came when I read on Yahoo! that Joe Mihalic recently paid down $90,000 in student loan debts in 7 months. Seven months! That is nearly $13,000 a month. Intrigued, I read more about his story on The Huffington Post.

After he did the obvious measures of selling off his extra vehicle, his motorcycle and cashing in investments and savings, he went renegade and cashed in his $8,000 retirement. (We certainly have enough in our retirement to erase our debt, but I am not as young as Joe, and I wouldn’t be willing to pay the penalties. Most financial experts do NOT recommend wiping out your retirement to pay down debts.)

Then he made the hard sacrifices including:

While we are generally frugal, we slip up and spend too much money on groceries and other expenses (such as our unnecessary trips out to restaurants this month). There is still some fat in the budget, and that fat can be cut and funneled toward our debt repayment. We still have room to improve.

Sometimes when you are tired and are immersed in your debt repayment, getting out of debt can feel hopeless. You can feel like the debt will never go away, and you can start to doubt yourself and the sacrifices you are making. In times of doubt, read stories like Mihalic’s to see that gazelle intensity does work. He made it through to the other side. You can, too.

Every year, many of us are lucky enough to receive some sort of bonus from our employer.  (If you’re self employed, that’s bonus enough. 😉 )  And when we do, the inevitable question arises.  What do I do with the money?  And then, how to budget for it?

The simple answer is to spend it wisely.  In a more complex answer, it depends on what your goals are for your financial life.  Using your bonus to buy Christmas presents may make you feel good for a month or two, but will you feel guilty afterward?  You’ll feel much better, in the long run, if you spend the money wisely towards your goals. 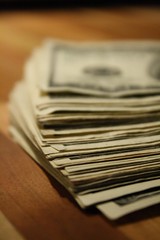 Here’s the downside to that, though.  You’ll also feel guilty if you use it all for debt repayment.  Each of you will have a different situation, but here’s how we usually use our bonus here in Beating Broke.

Consider taking 10% of the bonus and blowing it.  Buy some presents.  Take your family out to dinner and a movie.  Whatever you want.  Give yourself 10% in cash and free rein to do whatever you want with it. You’ll feel better when you do.

With the remaining, take a look at your situation.  Do you have a purchase that you’ve been saving up for, or putting off until you could afford it?  I’m not talking about those gifts, or the television upgrade, but things that you really need.  Maybe some costco eyeglasses? For example, a portion of my bonus (if I get it) will go towards buying new tires for one of our cars and paying for a repair that one of them needs.  It won’t take the whole bonus, but a good portion of it.  And it will be extremely relieving to not have to come up with that money out of my normal paycheck.  If the bonus doesn’t come, I’ll still have to pay for those things, but it might take a little longer to pay for them.

Maybe your situation doesn’t have a purchase like that that you need to pay for.  But, maybe you’ve got some debt that it could help retire.  What we don’t spend on tires and repairs, will likely go towards paying off a debt.  It won’t pay off any of them all by itself, but it will cut the payoff by several months.  And, while that doesn’t give me the same feeling that just blowing the money on stuff does, it will leave me feeling much better for a far longer time.

The bottom line is this.  Think about how you spend your bonus and spend it wisely.  You’ll feel much better for it.

One of the reasons that I started this site was because it forces me to learn new personal finance skills.  Sometimes, the tree is sitting there in the forest and you need someone to point it out and make it stick out from the forest.  The more skills that you learn in any given subject, the closer you are to what could be considered an expert on that subject.  There are a few subjects that I consider myself to be an expert, but personal finance is not one of them.  But, I am trying.

It occurs to me, however, that in our journey to become experts at personal finance (even if it’s just our own finances) we can sometimes hold ourselves back.  We can sometimes become so focused on the topic and that one slice of our lives that we forget that there are other parts of our lives that must also be taken care of.  For many, personal finance is a deeply religious topic.  As a Christian, there are many places in the Bible that specifically mention money and the manner in which we should handle it.  In fact, you might notice the tag line here at Beating Broke as being a quote from the Bible.  But, nowhere in the Bible does it say that I must be perfect in the handling of my money before I should begin to work on any other aspects of my life.

If we focus too long on any one aspect, many of the other aspects can quickly fall behind.  Baker, from Man vs. Debt, recently called himself a hypocrite.  Why?  Because he’s been a crusader for paying off debt and doing so unrelentingly.  He has preached a very die-hard approach to debt retirement that is based in the teachings of Dave Ramsey.  But, Baker and his family have put their debt repayment on hold while they travel and experience foreign living and working.

If you only glance at the situation, you can’t help but agree with Baker’s assessment of himself.  And in a some ways, he is a hypocrite.  However, he also is not entirely a hypocrite.  He and his wife planned for this trip.  They budgeted for it and saved for it.  Yes, they put some of their goals on hold, but they did so to take advantage of an opportunity that may have never reappeared for them.  If he and his wife had passed up on this opportunity, they would have been kicking themselves for it for the rest of their life.  They’d be debt free, but at what cost.

It is a lifetime opportunity.  If they had to choose between debt repayment and a trip to Disneyland, I would say that they would be stupid to not skip it.  After all, Disneyland isn’t likely to go away anytime soon and they’d be able to visit at a later date.  Yes, you have to maintain your vigilance and do whatever you can to meet your goals.  But you also have to live your life.  If your goals are holding you back from living your life, then you really should rethink your goals, because they may be causing more harm than good.

Baker is a very skillful personal finance person.  He’s been writing about the subject for quite a while now.  He and his wife have made great strides towards their goal of being debt free.  But, Baker didn’t let his personal finance skills hold him back.  He didn’t let them keep him from living passionately. And he didn’t let them keep him from taking advantage of a once in a lifetime opportunity.  He and his family will have a wonderful story to tell and experiences that you just can’t buy.  If that makes him a hypocrite, then so be it.  I don’t think it does.  After all, if he hadn’t been walking the walk, he wouldn’t have had the ability to take advantage of the opportunity.  If anything, he’s an example of why you need to stick to your guns.  If you do, you will be able to take advantage of opportunity instead of having to let it pass you by.