The housing crash of 2008 is still sitting heavy on many homeowners.  Many who bought a house during the peak of the market were left with houses that they’d bought at nearly twice the current value of the home.  Much has been said about the dilemma that those homeowners find themselves in.  As the economy receded, so too did their jobs, and their pay, causing many to simply walk away from their homes when they could no longer afford the mortgage.

Foreclosure is a bit of a messy deal.  The bank takes the home back, and then sells it, attempting to recoup some of the value of the mortgage.  We’ve seen many different methods of attempting to avoid the bulk foreclosure of homes in America.  From Government sponsored programs that help with restructuring of the loan, to banks voluntarily restructuring the loan, to what is a rather disturbing new program in Richmond, CA.

The program is laid out in this recent article on CNN Money. (California city’s drastic foreclosure remedy: seizure)  In the article, the City has started a program to attempt to purchase the mortgages of many underwater loans in the city.  It’s an attempt to avoid the decline of low-income neighborhoods, and those neighborhoods already hit hard by the economy.  Seems pretty normal, until you read a bit further.

But if the holders of the loans, who are mostly investors, refuse to sell by Aug. 14, the city said it will invoke eminent domain to seize the mortgages so it has more control over the process of making them affordable. 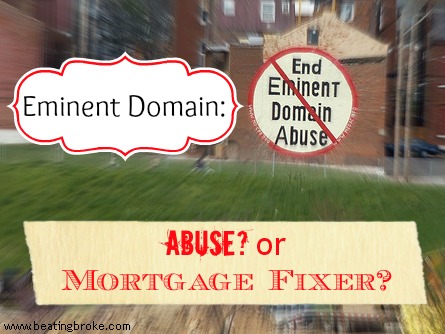 That’s right.  If the investors refuse to sell by August 14th, the city will invoke eminent domain and seize the mortgages in order to bring those mortgages into the program.

There are several things at play here.  I don’t argue that there are many who are nearing foreclosure, and that in many cases, they were preyed upon by the banks and investors by being given loans for houses they couldn’t afford in the first place.  I don’t think that excuses the buyers from not knowing that they couldn’t afford the mortgage.  I’m sure there are those that could afford the house at the time of purchase, but have since fallen on hard times.  In some cases, I do think that there should be something in place to help people ease the pain of their mortgage.  But, that’s another article.

Back to Richmond, CA, and their silly new program.  They plan on using eminent domain to seize the mortgage.  As is pointed out in the CNN Money article, eminent domain is usually used by public entities to seize physical properties to make way for public parks, malls, and right-of-ways for transportation initiatives.

[Tweet “The city of Richmond, CA is threatening to use eminent domain to seize the mortgages of home nearing foreclosure.”]

The article alludes to the fact that eminent domain, to be legal, must be used for that are in the public interest.  Meaning that the people of the city (or neighborhood) must have something to gain from the seizure. I think this is a bit of a grey area, and is likely to end up in court.  It’s legality, in the seizure of only certain mortgages, and not the mortgages of the entire neighborhood, makes its usage for the public interest somewhat shaky.  After all, who among us wouldn’t want to participate in a program that cut our mortgage in half and reduced the payments by the same?  Absolutely!  But, who among us has anything to gain by having our neighbor across the street participate in the program, and not us?  Yeah.  Even if I can afford my mortgage, I’d be a bit jealous.  If I really wanted to cause a scene, I’d sue the city.

Legality aside, I still think the program is a mistake.  Many places around the country are facing the same dilemma, and many are trying to find innovative solutions to fix the problem.  The city of Detroit just declared bankruptcy because the population of the city, and thus it’s tax-base, has dropped so drastically over recent years.  Perhaps the city of Richmond fears the same problem.  What they should be spending their time fixing, however, is their local economy.  They’ll spend all kinds of money executing this program, then defending it in court, only to still have the same economy.

If they can find ways to improve the economy by pushing local businesses, promoting local producers, and making improvements to the structures to do so, I think they’ll find that many of those foreclosures start getting picked up by new homeowners.

Maybe I’m wrong.  I’m certainly not an expert in economics, least of all economics in California.  What do you think?  Is the usage of eminent domain here a valid one?  Will it be challenged legally?  How would you feel if your city had a program like this?

If you recently bought your first home let me congratulate you. This is possibly the very best time to buy real estate that you’ll ever see in your lifetime. You made a smart move. And because you are a smart real estate investor, I know you’ll be interested in taking advantage of the following 3 ways young homeowners can save even more “moolah”.

I owned a home warranty program for years and it was a waste of money. Of course it felt great not to have to worry about running into major unexpected expenses, but the cost just didn’t justify it. First of all, you are stuck with any repair person the home protection company sends out. Next, the deductible you have to pay is often pretty close to the amount you’d have to pay to a contractor of your own choosing. Last, when you do have a major repair, you are stuck (again) with whoever the company sends out unless you are willing to go through a great deal of red tape.

You’re always responsible for upgrades, code changes and any problems associated with misuse or poor maintenance. I cancelled my home protection plan several years ago and it turned out to be a fantastic decision. If you follow my lead on this, you’ll save at least $600 a year.

If you are a young homeowner you might have a young family or plan on having one. As a result, you definitely need life insurance. But when it comes to term life vs. whole life – play it smart. Term life is your best friend. It’s cheap and it does the job. It’s true that at some point (20 or 30 years down the road) your term insurance will expire. But by that time, you may not need life insurance anyway. Term life is so much cheaper than whole life that you can take that savings and invest it. This way probably you’ll have much more than the whole life promises.

One of the biggest problems with whole life (and I feel it’s criminal) is that agents sell you the whole life you can afford because it pays them a whole lot more commission. (Maybe that’s why they call it “whole” life.) And because it buys a great deal less insurance than term, people end up dangerously under-insured. You could save several thousands of dollars each year and have better coverage just by having term instead of whole life insurance. Look into this ASAP. 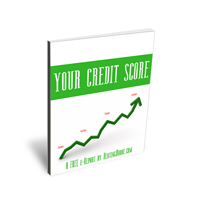 Because you are a young homeowner, you’ll be using your credit for a very long time. And you might have to lean on that plastic a lot right now to pay for all that new furniture and appliances. If you able to get even a slightly better credit score, you might end up savings a bundle every month. That’s because a higher credit score will help you get lower interest rates on credit cards and mortgages.

Find out what your score is and make sure there are no errors. If there are mistakes, fix them. You can easily do most of this without paying a cent. You can even get your credit score for free and sign up for services that provide updates whenever there is a change to your rating. This has helped me a great deal.

As a young homeowner you might be facing some pretty hefty expenses and that can be daunting. Take these 3 steps. Dump the home protection plan. Get rid of your whole life insurance and buy term instead. Finally make sure your credit score is as high as possible.

Will you save $3745? I don’t know. You could save a lot more. You’ll never know until you start taking action.

What are the biggest expenses you face as a young homeowner? What have you done to reduce those costs?

This was a guest post written by Neal Frankle. He is a Certified Financial Planner ® and owns Wealth Pilgrim – a great personal finance blog. He writes extensively about ways to help people make smart financial decisions. One of his most in-depth posts was his review of CIT Bank.

One of the biggest purchases you will make over your lifetime is the purchase of a house.  Some will argue that purchasing a house is an investment.  But, if it’s your primary house that you intend to live in, it’s not an investment.  Sorry, it just isn’t.  If you intend to rent the house out, that’s another story, but your primary residence is just a purchase.  Even so, it’s a very large purchase.  It makes sense, then, that we will want to find as many ways as we can to save money on the purchase of our home.

Saving before a home purchase

I’ll discuss how to save on your home once you’ve already purchased it a bit further down, but you’ll find yourself a good bit ahead of the game if you start thinking about how you can save money on your home purchase before you make the purchase.

Saving after a home purchase

Whether you’re looking at buying a home, or already have, saving money on the biggest purchase of your life is always worth looking into.  A few minutes on the phone with your lender can sometimes save you more than you would cutting lattes every day.  With the higher number of defaulting mortgages recently, many banks are much more willing to help you save money on your payments and pay the loan off early.  They like getting their money back too!

What other ways have you used to save money on your mortgage?  What’s the most extreme example that you’ve heard of?