The commonly used rate of inflation, 3%-4%, is used in so many formulas for retirement, investing, and “cost-of-living” increases.  But, is that the right number?  A recent news story released by the American Institute for Economic Research claims that the real rate of inflation is closer to 8%.

I won’t pretend to understand all of the economic talk in that article.  What I do understand is that they are claiming to be using numbers that are more reflective of the average American’s spending habits.  More importantly, if their research is even partially correct, it means that the rate of inflation could be significantly higher for some parts of the populace.  Not only does this affect the available funds for saving and spending, it could affect the numbers that many people are using for estimated retirement needs.

The research is still fairly new, as it doesn’t appear that they have that much historical data to back up their claims.  But, they do present a strong argument for a change in what we assume inflation to be, and where we get that information from.

How would a 8% inflation rate affect your finances? 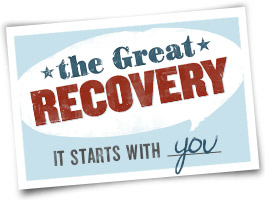 It doesn’t take a genius to figure out that we (Americans in particular) are in a boatload of hurt, financially.  Take the outliers away, and we’re a nation (and world) floating up to our eyeballs in debt.  Here’s a test for those of you who commute to work.  On your way to work, or your way home, count how many payday loan shops, pawn shops, and quick cash shops you pass.

I have never hid the fact that I credit Dave Ramsey and his book, Total Money Makeover, with being one of the big catalysts in our financial turn around.  The guy is inspirational when it comes to money.  Not everyone thinks he’s all that, but the fact of the matter is that he’s helped thousands of people get control of their finances and turn their lives around.  Now, he’s setting his sights a bit higher.  On the nation.

He’s come up with this idea of a “Great Recovery“, where we take it upon ourselves to educate each other on the proper way to manage our money, and lead each other in the a more biblical usage of money.  He explains it a heck of a lot better than I ever will.  Go and watch the kickoff event he held for it last night.

I don’t know if we can pull it off, but shouldn’t we try?  I know that’s one of my purposes here, at Beating Broke.  I want to help you become better with your money.  Along the way, I know I’ve learned a few things myself.