We’ve been on a journey to pay off our debt for 3.5 years now.  At first, we were gazelle intense, but then I burned out from working too hard, so we slowed down on the debt repayment.

Last year, we moved to Arizona from Illinois, so our money became much tighter as we faced unexpected moving expenses.  (Aren’t there always unexpected expenses when making such a long move?)

The good news is that even though we haven’t made significant debt repayment progress over the last year, we’ve been able to pay for all of these most recent expenses in cash, without going further into debt. 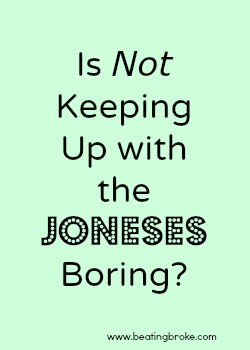 Basically, each year for the last 3.5 years, our budget has become tighter and tighter.  We’ve definitely NOT kept up with the Joneses.

Yet, we’ve not found this type of life boring.

If anything, living this way makes us appreciate a “treat” that we used to take for granted.  For instance, I homeschool my kids, and my daughters recently completed preschool and kindergarten.  They were both very excited about moving on to kindergarten and first grade, respectively, so my husband and I decided to take the family out for a treat.

We went to our favorite restaurant.  We went for breakfast, so the bill would be cheaper, and we used a $25 gift card that we had gotten at Christmas and saved.  Because we had not gone out to eat in about five months, the kids were beyond thrilled.  All of us enjoyed the meal greatly.

Because we haven’t gone out to eat in so long, doing so was a special treat.

Before we got on a budget and started paying down debt, we often went out to eat three or four times a week.  Honestly, because we did it so often, going out to eat had become boring.  Now, because we don’t do it very often, we appreciate the meal when we do go out.

Because we have simplified our lives, we are able to enjoy special occasions much more.

We Have Plenty of Fun—For Free

Just because we aren’t keeping up with the Jones and are on a budget doesn’t mean we aren’t having fun.  Just this week, my mom was in town for a visit.  We took her to a national park, which had free admission that day.  We watched artisans make homemade tortillas and weave baskets.  We listened to a local band, and we got an excellent tour of the site.  Before heading home, we enjoyed a picnic lunch on the grounds.

Last month we went to the Tucson Festival of Books.  There was so much to do (for free!) that we stayed over five hours.  We could have stayed even longer.

Going on a tight budget and deciding NOT to keep up with the Jones can be difficult at first.  Now, however, we’ve done it for so many years that we find living this way actually improves our quality of life.