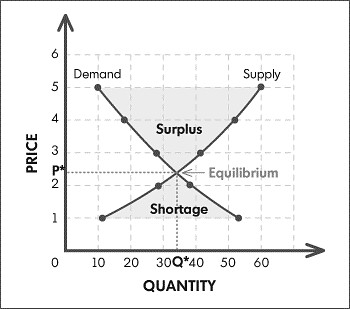 Supply and Demand.  We all learn about this tenet of the capitalist market at a rather early age.  It’s a pretty simple concept really.  When one increases the other decreases.  As supply grows, demand diminishes.  As does the price for that product.  As demand grows, supply diminishes.  And price goes up. It’s a function of our market.  And, I think parts of it are broken.

As a frugal blogger, I’m constantly wracking my brain trying to find new ways to be more frugal, and new ways to present that information to you. Part of that includes keeping an eye on the market.  And as such, I’ve come to the conclusion that the law of supply and demand has become more of a guideline than a law.

Take airfare for instance.  According to this CNN Money article, airfare prices have been raised twice as many times this year as they were all of last year.  And we’re only in March.  What allows them to do that and get away with it?  You keep paying for the tickets.  Gas goes up, and we still fill up our SUVs.  As long as you continue to pay the prices they are asking, the prices will continue to go up.  And, recently, they’ve gone up anyways.

We all know that some of the things that we are buying are too expensive.  I read several articles a day about how expensive somethings have gotten and ways to save money by making your own, or frugally using what you do buy.  And, to some extent, that does work.  For a select few.  But, there are others who are willingly paying that price and then complain about it afterwards.  Why?  They’ve been conditioned to do that.  When was the last time you heard of a boycott based on the price of a good, rather than something the company did to offend you?  Do you think that if even half of the consumers boycotted flying for a month, that prices wouldn’t drop?  They’d have to or they’d have to go out of business.

We aren’t just consumers.  We have brains and are capable (in most cases) of thinking with them.  It’s time we used them to demand fair prices for products.  We’ve forgotten that supply and demand goes both ways.  We do have some small modicum of control here, but we’ve grown complacent and forgotten that we have it at all.  Many of you are frugalers.  But, we always say that we’re doing it to save money.  And, that’s true, but maybe it’s time we also say that we’re doing it to protest the high prices that we’re being charged.  Oddly, saving money isn’t always a good enough excuse for some people.  Sometimes they need a moral soapbox to stand on.  And, maybe that’s the way to take back supply and demand, and turn it into a working machine again rather than a pleasant theory in economics textbooks.