The best example of this is a budget.  A budget is built and held to in anticipation of events in your financial life.  You know that things like your electric bill and water bill are going to be coming and roughly how much they  will be.  That allows you to budget for them and set aside money to pay for them with.  A budget is a great tool in avoiding reactive personal finance.

Why do we need to avoid reactive personal finance?  Because reactive personal finance is disruptive.  You are managing and spending your money in reaction to the events that are happening.  Doing so can cause you to quickly lose control of your finances and find yourself in a downward spiral of poor management choices and, eventually, it can lead to you being broke.

Some examples of events that can cause you to become reactive.  Medical emergencies, blown tires, unexpected social events, and even bills that are larger than they normally are.  Any thing that is unexpected can cause you to spend in a reactive manner.  And when you have events like that, it can often lead to larger problems, like overspending on luxury items to make you feel better.

How do you avoid reactive personal finance?  No plan is foolproof, so it’s not really completely possible.  However, you can make the odds of it happening be cut drastically.  How?  An emergency fund and a bit of willpower.  The emergency fund will give you the available spending power to cover any emergencies that would normally make you spend in a reactive manner.  Instead of trying to react and borrow from somewhere else to pay for the emergency, you can just pay from the emergency fund and not need to react any further.  The willpower comes in where the spending opportunity isn’t an emergency.  You have to have the willpower to avoid last minute and spontaneous spending that could drain your funds and cause you to become reactive when you no longer have the money to pay bills or buy necessities.

The best laid plans often go askew.  But, building an emergency fund and strengthening your resolve can go miles towards avoiding reactive finance and potential disaster.

They weren’t exactly forgotten, but unpaid all the same.

Our habit for doing our budget and paying bills consists of throwing everything in a pile and then sorting through the file when we sit down to enter all the data for our budget into the spreadsheet.  One of the first things we do is go through and find the unpaid bills and pay them.  When we sat down to do budget last night, we found our mistake.  One of the bills was sitting at the bottom of the pile.  Not a big deal, until you consider that we hadn’t been doing very well on regular budget checks and the due date for the bill had come and gone already.  Ouch.  To make matters worse, it was a credit card, so we’ll see what kind of late fees and default rates we end up with next month.

Lesson learned.  From now on, we’ll be paying bills as they come in instead of letting them wait until we do our budget work.  The other thing that I’ve been contemplating is to set most everything up on automatic payment systems.  I’ve been super hesitant to do this before because part of our financial history is a history of not having the money to pay our bills.  So, my fear has always been that if they come out automatically, the money won’ t be there, or the money won’t be there later on to pay for something more important.  Now that we’ve taken on budgeting and a much higher control over our money, that really isn’t a valid fear anymore and we could probably set up some automatic payments.

How do you all do it?  Pay as they come in?  Automatic deductions?  Or do you pay them at a set day or event? 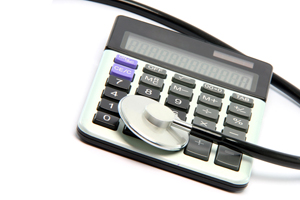