A few years ago, my brakes started making noise whenever I pushed the brake pedal.  I procrastinated quite a while before I took the car into the shop because I didn’t have the money for the repair.  However, because I waited so long, the brakes had worn down to the rotors, so my repair was much more expensive than it would have been had I come in right away.

But Wait! I Hadn’t Learned the Lesson Yet!

You would think I’d have learned my lesson, but no, I haven’t.

We own a minivan that is 11.5 years old and has 167,000 miles on it.  A while ago, one of the back sliding door handles broke, so we could no longer use it from the outside.  No worries.  We simply herded all the kids in through the other side door.  Was it a pain?  Just a little bit, but we didn’t want to spend $200 to $300 on a door handle repair when we had so many other pressing expenses.

So, we started opening the driver’s side door and reaching around to open the side door with the outside broken handle by using the inside handle.  By now, we were starting to feel a bit, um, special, I’ll say, because of our unusual way to open the door.  Still, we put off the repair because we had other expenses like a $210 garage door repair and a $90 air conditioning tune up along with a $900 deposit for braces for our son.

All was okay until the inside door handle broke.  Now, the only way the kids can get in and out of the car is through the front doors.  The special meter has gone up enormously, and even the kids are talking about how embarrassed the are to get in and out of the car.  Now that the repair is inevitable, I called the shop to find out the repair will likely be $400 to $500 because they’ll have to remove the door and replace both the inside and outside door handle.

Lesson learned.  When a repair is needed, make the repair.  If you don’t, you’ll likely end up paying more in the future.

How to Get the Money Together

If your budget is tight like ours is, there are ways to get the money together to make a smaller repair immediately so you don’t have to pay more for a larger repair later:

Have a pantry challenge for a week.  We spend approximately $150 to $200 a week for groceries.  By taking just one week to eat only what we have in the house and not going to the grocery store, we could have had the money for the handle repair before it got worse.  Lesson learned.

Sell stuff.  Everyone has stuff around the house that they don’t need or don’t use.  Sell things at second hand stores, sports resale stores, or eBay or Facebook.  You’ll be surprised how quickly the money will add up.

Do you procrastinate on repairs because your budget is tight?  If so, like us, has that rationale ended up costing you more money?

In the world of frugality, there are few things that will save you more money than learning a few DIY skills.  From simple things like replacing the light switch cover, to more difficult things like wiring electrical, the savings of doing it yourself over hiring a professional to do it can mean hundreds and even thousands that remains in your pocket.  It also seems like the more money a DIY project can save you, the more likely you are to find people who think the prospect of attempting it to be scary.

While I can’t advocate trying something that you’re completely uncomfortable doing, and uneducated about, I think both situations are completely solvable.  Learning what you can about a task can make it something that you’re far more comfortable doing.  We live in the information age, with access to so much more information than any other time in the history of our species.  We have the ability to learn things by watching videos on YouTube.  We can access websites that will have all the detailed instructions for a repair project, or new project.  Many of those have step-by-step instructions.  In short, there’s just no excuse for at least attempting to learn how to do the project and then deciding whether it’s something you want to tackle or not.  Sometimes, you decide it’s not something you want to tackle.  And that’s O.K. too.

So, what are some DIY projects that sound scary, but really aren’t all that bad?

I suppose the point isn’t really to list out all the projects that might sound scary to a DIY homeowner.  It’s really to point out that a lot of the projects that you and I might think are scary to take on really probably aren’t that hard.  A little time spend learning the techniques and basic principles of the project will likely lead us to being able to learn the skills needed to complete the task.  Even if it takes a couple extra trips to the hardware store.

Sites around the web, including this one, are always pushing free or DIY alternatives to lots of things.  And, in most cases, I think that they (and I) am right.  There are so many things that we pay other people to do that we can just as easily do ourselves.  Just about a year and a half ago, I built my own deck.  It wasn’t necessarily easy, and it certainly wasn’t quicker than hiring someone to do it for me, but boy did it save me some money.

I truly believe that there is little that you and I cannot do ourselves.  With a quick search on Youtube for the DIY project, and a few quick web searches, we can have some pretty detailed instructions on how to do anything.  Well, OK.  Probably not something like brain surgery.  There’s probably a bit more of a skill/knowledge gap there. But, certainly, most everything else.

Occasionally, I find a service that I decide I’d rather outsource to someone else.  Oil Changes are an excellent example.  Can I change my own oil?  Absolutely.  But, for $30, I get someone else to do it for me.  I don’t have to mess around with getting the filter loose, disposing of the waste oil, and I certainly don’t have to crawl around under the car doing it.  For me, it’s well worth the $20 or so difference to have someone else do it.  That’s more of a choice of convenience. Meaning, for me, that it is just more convenient to have someone else do it and save me the time and effort.

There are, however, some services that have less to do with convenience, and more to do with some other factors. 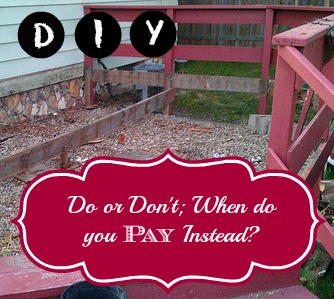 In the case of my DIY deck, I could have saved a whole lot of time by having someone else do it for me.  For a professional with a crew of a couple of guys, it probably would have only taken 3-4 days.  Maybe less.  It took me several weeks.  Obviously, it saved me a lot of money to do it myself, but if I had been crunched for time, it would have made a lot of sense to factor the time it would save into my choice.  I had the time, so it wasn’t that big of a deal.  (note: I say that now.  At the end of the project, I was seriously wondering why I did it myself)  The choice to have someone else change my oil isn’t weighted so heavily on saving time, but that is a factor.  I can have someone else do the work, and all I have to do is drop the car off.

I think this is one that many people discount too often.  In many of those cases, people choose to do something themselves strictly to save themselves some money and then fail at it.  In my case, I’ve tried, for many years, to control my weight.  I used to be an athlete, so I’ve always thought that I had the tools to lose the weight myself.  I’d start by finding some calorie counter that was free and start tracking calories.  But, what inevitably happens is that I forget to count for a day or two and then it stretches to a couple of weeks.  If I had lost any weight, it goes right back on.  Sometimes, paying for a service that has free or DIY alternatives can be motivational.  You’re paying for it, so you better get the most out of it.  I recently joined Weight Watchers Online and that factor has helped a lot.  There are other factors, but you better believe that the fact that I’m paying for the service is playing into it as well and keeping me working at it.

How could I write this post without adding this factor.  There are just some things that you hate to do.  For one reason or another, you just hate doing them.  To you, not doing that task is worth the money to have someone else do.  Maybe it’s mowing the lawn.  Maybe it’s changing the oil in your car.  Maybe it’s losing weight.  Wait, maybe not that one.  But, how cool would that be! For me, I tend to avoid major electrical work.  There’s just something about the possibility of electrocuting myself that I don’t like…  Another would be doing anything very high off the ground.  Can’t do it.

As much as I (and you), would like to think that there isn’t anything outside of our realm of possibility, we always seem to find something that we just aren’t capable of doing.  While I truly believe that you can learn to do many of the things that you think are impossible, I recognize that sometimes there are things that are physically impossible.  It doesn’t happen very often, but it does happen.

Saving money by doing things ourselves is a good trait to have.  It helps us keep our budgets from overrunning. It keeps us learning new things.  It gives us a sense of self worth by developing new skills and knowledge.  But, sometimes, there are other factors at work and we make the choice to have someone else do the work for us.  Maybe the cost difference isn’t worth the time you’d put into it.  Maybe the extra time you’d spend on it isn’t worth the savings.  Or, maybe you need some monetary motivation.  Whatever it is, we develop our own factors that go into the decision, and make a choice over whether to do something ourselves, or to hire someone to do it for us.

What are your factors in deciding whether you DIY or not?