Most of the time, when you hear or read the phrase “Dollar Cost Averaging”, it’s being applied to the stock market.  It’s the practice of buying a set amount of stock at a regular interval whereby the average cost per share of stock ends up normalizing.  So, if you buy stock high one time, and low the next, and then high, your average cost is going to be lower than the high cost and more than the low cost.  So long as the stock doesn’t pull an Enron, and slowly increases in value, you come out ahead in the long term.

But, does it have to apply to just stocks?  Absolutely not.  It really can apply to anything that you buy on a regular basis.  Gas for example.  A couple of weeks ago, I filled up the car at about $3.89 a gallon.  Today, as I drove by the gas station, it was at $3.69 a gallon.  I filled up at $3.89, so I don’t really need any gas right now, but I seriously considered stopping and topping off the tank to bring the overall cost of the gas I bought over the last several weeks down a few pennies.

There might be some argument that dollar cost averaging doesn’t work very well for consumables.  After all, if I had bought a few gallons at $3.69, my overall reserves of gas would not increase.  I’ve already consumed those few gallons that I paid $3.89 a gallon for.  But, I would have increased the total amount I had bought, and the average price would have been less than $3.89. 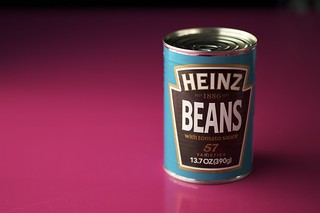 Dollar cost averaging works especially well for things that regularly fluctuate in price.  If you’re building a stockpile of food in your basement, it’s chili bean season.  There’s sales all over the place for chili beans.  Now, you could buy 50 or so cans at the sale price, but you might be tight on storage space.  Or, they might expire before you get to use them all.  Instead, you can use dollar cost averaging to buy slightly more than you might normally buy, and bring down the average cost of the ones you have to buy later in the season when they aren’t on sale any more.

O.K.  This does seem a little silly.  After all, who’s going to go out and figure out the average cost of a can of chili beans in the basement?  But, there’s a point in there.  There’s a certain rationality in buying things in set increments over time rather than trying to time the market (or chili bean sale) and buying a whole lot of the item at once.  How many times have you bought something only to find that it was on sale the next week?

And, don’t forget that the same principle goes the other way.  There are many normal things that we do on an everyday basis that can apply to the stock market too!  When we shop, we tend to stick to the brand names we know.  Even if those brand names are generic names.  Go far enough out of town and stop at a grocery store and try and convince yourself that the generic brand at that store is the same as the generic at home.  It takes a bit of thought!  Sticking to companies (brands) that you know when investing can be beneficial too.  More often than not, those brands and companies are companies that have been around for a long time and built a certain amount of trust in the marketplace.  They’re unlikely to just be an overnight sensation, or to quickly fall from favor.  In short, they’re stalwart investing options.

What exactly is dollar-cost averaging?

Dollar-cost averaging is a method of long-term investing.  By buying stocks in smaller chunks over time, the amount you pay for the stocks will balance itself out to an average.  So, in an example, if you were to buy 1 share of Microsoft for $50, then another share for $40, your dollar-cost average price per share would be $45.  So if the shares go back up to $50, you would be making money by selling.  Obviously, this is normally on a much larger scale.  Think 10s, 100s and 1000s of shares.

In troubled economic times, many people often overlook the benefits of dollar-cost averaging and participate in the mass hysteria.  If, instead, investors would take advantage of the opportunity, they could find themselves the recipients of a handsome profit when the market returns to it’s normal levels.  That, of course, is if it returns to it’s normal levels.  Which it most likely will.