Often, teens want to make money without the commitment of a part-time job that may require them to work more hours than they can handle while also attending school and keeping up with homework.  Or, they may want to work for themselves, doing what they love or participating in sports, doing schoolwork, and searching for scholarships.  There are many reasons why a teen may not want a traditional part-time job as a cashier or a fast food employee.

Historically, these types of kids would rely on babysitting or lawn mowing jobs.  If they were particularly resourceful, they may try to start their own Etsy store.  However, the time to start an Etsy store, market it, create products, maintain customer relations, and ship out items can be intense.  Many teens don’t have time for that.

Luckily, teens can now use the power of social media to grow their own business and make money quickly on the timeline they set.

For instance, a young woman in our homeschool group needed to raise $2,000 for an upcoming mission trip she wanted to attend.  She offered to make cinnamon rolls ($20 for a 9×13 pan) and fudge ($8/lb.) for Valentine’s Day.  She shared on her own Facebook page, and her mom shared on her Facebook page.  Their family and friends quickly responded by placing orders over the next week.  Within two weeks, she had made the money that she needed, and she had happy customers who had homemade sweet treats for Valentine’s Day.

Another teen in our group makes balloon animals.  She offered to make balloon flamingos attached to a container of chocolate for Valentine’s Day for $8.  She got over 25 orders and made a nice profit.

Recently, her mom set up a Facebook business page for her daughter to promote her business.  This young lady, who is still not even in high school, routinely is hired to make balloons at children’s birthday parties.  Now she has a page to promote her work by showing the balloon styles she can make and showing examples of what she does at parties.  This job can grow into a nice part-time income, especially when she is in high school and college.

While Facebook may be a great way for teens to start their business, it also gives them much needed exposure.  For instance, when the young lady above is working at a birthday party for a friend her mom has on Facebook, other moms at the party will ask about her services.  These women have no connection to her or her mom, but the magic of word-of-mouth referrals has begun.  Between Facebook and word-of-mouth referrals, she will likely keep very busy.

We’ve all heard the stories of teens who become YouTube celebrities and make thousands of dollars.  That likely won’t happen with the majority of kids.

However, thanks to social media, your child can grow a nice part-time business, especially if they advertise a product or skill that people want to their and their parents’ Facebook page, where people already know and trust them.

Do you have an entrepreneurial teenager?  If so, how do you help support their endeavors?  How do they usually find their clients?

Are you on Facebook?  Most everyone seems to be.  After all, Facebook is a great place to catch up with old friends, share photos of your kids (and see friends’ family photos), and even look up what old flames are doing now.

However, have you ever used Facebook as a tool to help facilitate a move?

Remember that cross country move my husband and I considered but didn’t think would actually happen?  Well, it’s going to happen.

This summer, we’ll be moving nearly 2,000 miles from Illinois to Arizona.

In the midst of all of our planning, I’ve been amazed at how Facebook has helped me to both sell stuff and learn about the new city we’re moving to. 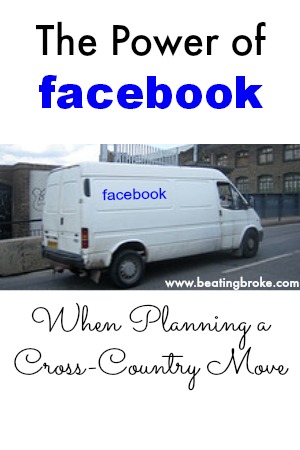 I love dressing my kids in Gymboree clothes that I buy for a steal when they’re on sale and I have a coupon.  A few years ago, I had good luck selling them on eBay after the kids had outgrown them, but now, the market is saturated.  After eBay and PayPal fees, selling there is really not worth my time.

I found that there are several Gymboree groups on Facebook.  Since I have about three years of my daughters’ outgrown clothes to sell, this was a great find.  The first week I listed clothes on the Facebook groups, I earned over $200!  I still have about half of the clothes to sell.  Thanks, Facebook for giving me cash and reducing the “stuff” I’ll have to move.

Making Connections to the New City

These women went above and beyond in answering every question I had.  In fact, one of the women, Donna, invited me to visit her when we took a preliminary trip to Arizona before my husband signed his contract.  We talked with her for over an hour at her house, and she gave us great information about things to do in the city, what she likes and dislikes, etc.

When we make our final move there, she’ll also be an excellent resource as we search for new doctors, dentists, car repair shops, etc.  Plus, it’s nice to have someone that we already know once we get in town.

Have you harnessed the power of Facebook?  Doing so is easy.  If you haven’t done so yet, you may want to join some Facebook groups for activities and hobbies you’re interested in.  Finding one group initially is hardest.  Then, once you find a group you like, you’ll see on your sidebar other similar groups that you can join.

Many towns have Facebook pages or swap pages where you can sell and buy items from members in your local community.  Other groups like the Gymboree ones focus on people who like to buy and sell particular brands of clothes.

If you need to move or just to declutter your house, Facebook can be a great resource.

Do you use Facebook for more than just the basic social connection with friends and family?  If so, how?