When I was little, I devoured the Little House on the Prairie series. I felt bad then for Ma and Pa. I felt bad for the way they struggled financially, facing setback after setback. I felt bad that they always had to move just as soon as they were settled.

But then I read the books again as an adult. Then I read them one more time to my daughters. Now I realize, as much as Pa was a loving father, he was responsible for a lot of his family’s financial hardships.

Life in Wisconsin was good for them. But once Pa got the itch to go west, his family never had a stable environment. They never got more than a few years into getting settled and making a life for themselves before they moved again.

Does Moving Now Cause the Same Financial Difficulties?

Most people would argue that life was different then, and moving around now doesn’t cause as much financial hardship, but as someone who recently completed a 2,000-mile move, I would disagree.

My husband and I had lived in Chicago for 14 years before we made the move last July to Tucson, Arizona. We went for my husband’s work and because the move would give us a lower cost of living and a pay raise for my husband. On paper, everything looked good.

We foolishly thought we’d stay for two to four years. Now, I’m not sure we should move so soon if we want to prosper financially.

Even though my husband’s employer paid for the move, we still had many expenses like setting up the utilities and paying deposits on them, buying a few new pieces of furniture, etc.

Breaking Even and Getting Ahead Takes Years

We bought a house when we moved here, knowing that we weren’t sure how long we’d stay. We’ve had our mortgage for 15 months now, and in that time, we’ve paid down $4,300 on principal. Our home has increased just $1,100 in value during that time. That gives us a cushion of about $5,400, but I’m guessing if we were to sell our house next year (which would be two years that we’ve lived here), we’d be losing money thanks to realtor fees.

We’ve also just reached the point where we’ve started to discover ways to save money in our new city. Now I know where the cheapest places are to buy groceries, secondhand clothes, etc. Our first few months here we spent much more than we normally do on groceries because I didn’t know which stores offered the best deals.

We also have finally found decent doctors and dentists. Our first few months here, we found out my daughter need 6(!) cavities filled. We had to go to four different dentists before we found one that we liked and could trust. All of those different visits cost us a little less than $200 out of pocket, and that was before her cavities were even filled.

Of course, I’m not saying never to move. In our case, the decrease in cost of living and my husband’s raise made it possible for us to own a house, which we couldn’t afford to do during our 14 years living in Chicago. However, the whole story isn’t just on paper.  When you move, there are many incidentals that add up. Moving repeatedly can cause you to struggle financially.

It’s no surprise to me that the only time in life when Pa and Ma flourished financially was after Ma put her foot down and refused to move from DeSmet, North Dakota. Without the constant moves, they could finally get established and become comfortable financially.

How often do you move? Do you agree that frequent moves are detrimental to your finances? 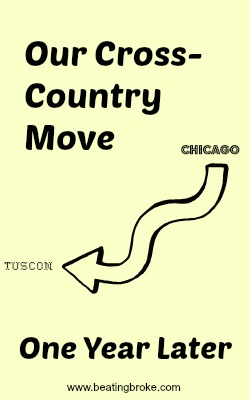 Last July, our family moved from the near suburbs of Chicago to the suburbs of Tucson, Arizona.  We knew that there would be some significant changes to get used to, like the change in weather, but honestly, we weren’t sure how our lives would change.

Had my husband not been offered a job in Tucson, we never would have considered moving so far away from family and friends.  However, making this move turned out to be a wonderful decision.

Even though my husband is only making $2,000 more than he was making in Chicago, our quality of life has improved tremendously.

Benefits of Moving to Tucson

Our kids have room to play.  Even though we lived in the suburbs of Chicago, the population is so dense that the houses all have very small yards.  Plus, the house that we rented backed up to an alley, so I never dared leave the kids outside alone.  Now, we have a large backyard with a cement fence around it.  I can see the kids outside playing while I’m in the kitchen preparing food.  We love this feature of our new home.

Money stretches so much further in Tucson.  Although it’s a challenge, in Tucson, I have a grocery limit of $125 a week.  There is absolutely no way I could have such a low grocery bill in Chicago.  It simply was not possible.  Gas here is much cheaper, too.

The environment is so much quieter and friendlier.  In Chicago, many people were just, well, grouchy.  (Not all of them, but certainly enough of them.)  We lived in a middle class suburb, and we had some sketchy characters in our neighborhood like a woman who lived down the alley and routinely dug through everyone’s trash.  (I’m not making that up!)  There was also so much noise from the nearby fire station, trains, and constant traffic.  In Tucson, our neighbors are very friendly, there is no one sketchy (that we’ve met so far), and it’s much, much quieter here.

Drawbacks to Our Move

Everything is so far away.  In Chicago, I was very spoiled.  I had three grocery stores within a two mile drive.  Our dentist and doctor were each less than 4 miles away.  In Tucson, everything is 10 or more miles away.  We have to drive a half an hour to get to our dentist.  Driving so much can take up a large part of our time.

I never would have considered moving to improve our standard of living, but now that we’ve done so, I can see what a great move it was for our family.  Our quality of life has improved dramatically, and this move is giving us a chance to improve our financial situation.

Would you, or have you, moved far away to improve your standard of living and financial situation?  Or is this something you would not consider?