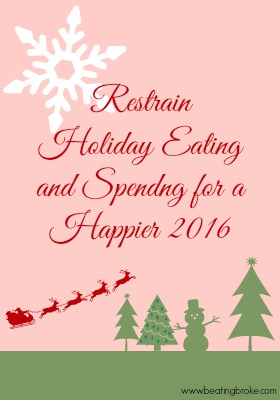 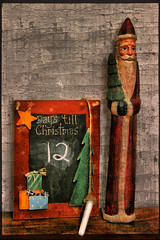 Holiday shopping is in full swing now, and you may be feeling the financial pressure.  Shane recently quit his job and is working on a tight holiday budget.  My husband and I are in the midst of being gazelle intense, so we don’t have much extra money for gifts.  Yet even though we don’t have much money to spend this holiday season, I feel great about what we are giving because we are not overspending.  We can truly afford what we are giving.  Instead of overspending, we are empowering ourselves by spending exactly what we are able to spend.  Follow these tips to rein in your holiday purchases this season:

Literally.  Put them in water and freeze them.  Better yet, put them in peanut butter as we did.  Vow not to use your credit cards this month.  There is nothing worse than opening your credit card statement and staring at the large number you now owe.  The presents have been opened, the holiday is over, but you still owe for the holidays.  If, instead, you put the credit cards away, you have nothing to dread come January.

-Set a budget and fund it with cash.

Determine exactly how much you have to spend and withdraw that money from your bank account.  Pay for every purchase with cash.  Feel the pain as you part from the cash.  Acknowledge what you are spending, and feel empowered that you are sticking to your budget.
If you want to shop online, get a debit card.  Just avoid using credit cards.

There will be plenty of deals to come this holiday season.  Stay focused on the deals and only buy items you can get on sale.  Take advantage of buy one get one free sales such as buy one toy of a certain brand, get the second toy from the same brand free.

For children, especially young children, buy toys that come in sets such as a baby doll with a stroller and a high chair.  Take those out of the package and break them into three different presents for the price you paid for the bundled gift.

My children get presents from Santa and from me and my husband.  Since they were little, the toys that get from us are often gently used.  I shop garage sales throughout the summer and hide gifts away.  This year my three year old will get a new in the box baby doll that I picked up at a garage sale for $3.  My son will get a wooden box with five different games in it that I found at a garage sale for $5.

Obviously you may not have time to go to (or even find) garage sales now, but you can shop children’s resale stores for quality toys at a steep discount.

They say ‘tis better to give than to receive, and that is true more so when what you give is what you can afford.  Why not enjoy watching your family open their presents this Christmas without worrying where the money will come to pay for everything in January.  It is possible.  Beating Broke and I are both proof of that.